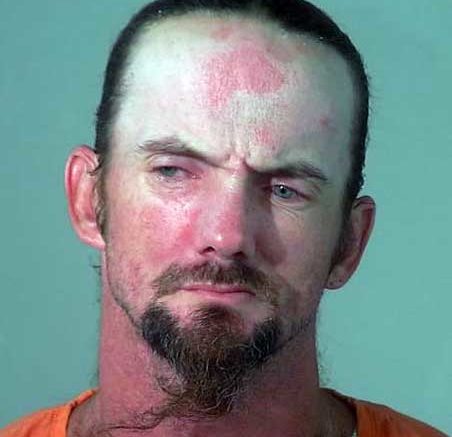 Contributed Photo/Courtesy GCSO: Convicted sex offender Jason Lee Morris, 36, was booked into jail on a probation violation after 13.8 grams of meth was found in his possession.

SAFFORD – A man on probation for failing to register as a sex offender was arrested Monday after authorities located 13.8 grams of methamphetamine in his tool box.

Jason Lee Morris, 36, of Safford, was arrested and booked into the Graham County Jail on a probation violation after the drugs were located.

Probation officers received a tip regarding the drugs and found the stash Morris’ closet.

His luck ran out in 2016, however, when he was charged with failure to register as a sex offender and placed on probation. As a condition of his probation, his residence may be searched at any time without a search warrant.

According to a Safford Police report, multiple probation officers received information that Morris had meth in a locked tool box in his bedroom closet and they requested the officer break into the toolbox.

The officer arrived at Morris’ residence at 909 S. 3rd Ave. and probation officers located the toolbox. Upon the officer prying the toolbox open, a plastic sandwich bag with what turned out to be 13.8 grams of meth was located in the top right drawer. Other illicit items in the toolbox included a digital scale, spoon with apparent meth residue, a bag full of smaller baggies, loose meth crystals, and a glass bottle with some marijuana. Also located in the toolbox were two prescription bottles with Morris’ name on them.

Morris denied knowledge of the drugs and said the toolbox belonged to another person who only let him open it when it was time to take his medication.

While at the scene, the officer asked if any more drugs were in the residence and Morris said there was not. However, a woman who was also present, Kittie Glenn, said she had some weed and turned over a small amount of marijuana, a grinder and two glass pipes.