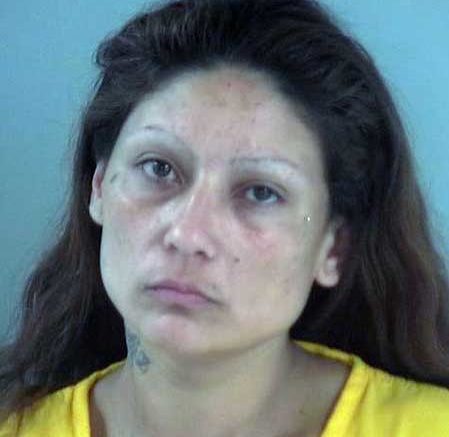 Contributed Photo/Courtesy GCSO: A woman wanted on warrants regarding aggravated DUI and an open container of liquor in a vehicle was found with methamphetamine and drug paraphernalia when taken into custody.

SAFFORD – Diligent police work and a little assistance from a homeless boyfriend led to the apprehension of a wanted woman Monday, who happened to also be hiding methamphetamine in her underclothing.

Nicole Dupre Jones, 36, of Safford was arrested for two felony warrants and a misdemeanor warrant, as well as possession of a dangerous drug and possession of drug paraphernalia. The warrants total $30,500 and are in regard to an aggravated DUI charge out of Graham County Superior Court and a charge of open container of liquor in a vehicle from Safford Justice Court.

While on patrol, an officer noticed a vehicle he believed belonged to Jones parked outside of an apartment on E. 8th Street. A man was located inside the vehicle rolling cigarettes.

The officer noticed several articles of clothing, bags, and toiletries in the car and the man said he and his girlfriend, Jones, were living in the vehicle until an apartment was available.

The officer then inquired if Jones was inside the adjacent apartment and the man said she was.

Upon knocking on the apartment door, Jones responded and was taken into custody for her warrant. She requested to use the bathroom first and began to walk away from the officer, but her request was denied.

As she was being led to the officer’s patrol vehicle, Jones allegedly informed the officer that she had “dope and a pipe” hidden in her underclothing. A female officer then was requested and located a baggie containing .4 of a gram of meth and a glass pipe with apparent meth residue in Jones’ bra. Jones was then taken to the Graham County Jail and booked on her warrants. The case was forwarded to the Graham County Attorney’s Office for further charging.