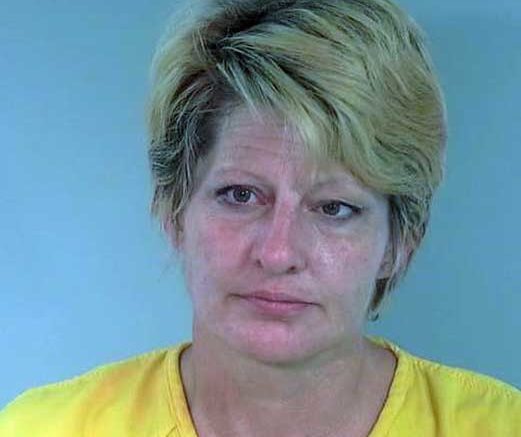 Contributed Photo/Courtesy GCSO: Crystal Maldonado was arrested for possession of crystal methamphetamine and drug paraphernalia after being caught driving on a suspended license.

SAFFORD  – A woman who said she managed to wean herself off heroin was arrested Sept. 28, apparently because of what she used to achieve that goal.

Crystal Maldonado was arrested for possession of a dangerous drug and possession of drug paraphernalia after an officer located a small amount of crystal methamphetamine along with three spoons and syringes with apparent drug residue during a traffic stop.

According to a Safford Police report, an officer noticed a vehicle pull out of the 8th Street Apartments just before noon and suddenly stop in the middle of the roadway. The vehicle then pulled over to the side and parked as the driver ducked down into the seat. As the officer drove past he could see Maldonado, whom he knew had a suspended driver’s license, leaning down in the vehicle in an apparent attempt to hide.

The officer then approached Maldonado, who allegedly announced that she was off heroin. Shortly thereafter, however, she admitted to having some “white”, which is slang for meth, under the passenger side’s seat.

The officer located a baggie with a small amount of meth where Maldonado said it would be and also located three spoons and three syringes with apparent drug residue. Maldonado allegedly said all the paraphernalia was meth-related. She said she had recently quit using heroin and had last used meth about a day prior to the police contact. A lone pill of .5mg of Clonazepam was also located in the vehicle, which Maldonado said a friend had given her to help with her anxiety. According to drugs.com, Clonazepam is a prescription drug used to treat seizure disorders as well as panic disorders in adults and it may be habit-forming.

Maldonado was arrested at the scene and taken to the Safford Police Department, where she was then subsequently released. The vehicle was towed from the scene and placed on a 30-day impound since Maldonado was driving on a suspended license.