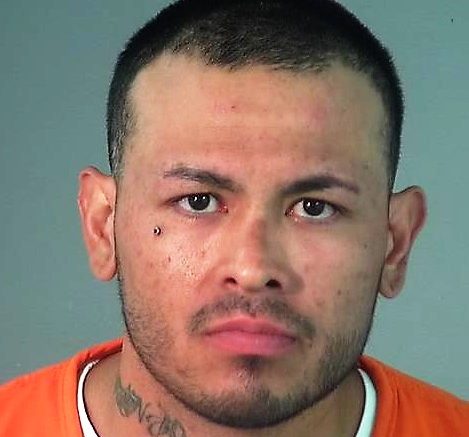 Contributed Photo/Courtesy GCSO: Zachary Naranjo was booked into the jail on drug charges after officers found him with meth and a needle during an early morning bicycle ride.

SAFFORD – Occasionally, there is just an hour difference between people on bicycles late at night doing nefarious deeds and those on bicycles early in the morning exercising or training, but that hour can make all the difference.

Zachary Alex Naranjo, 30, of Safford, was arrested and booked into the Graham County Jail on Thursday after being found in possession of a needle and small quantity of methamphetamine.

According to a Safford Police report, Naranjo and a woman were seen riding bicycles across 8th Avenue at about 3:05 a.m. The officer noted that Naranjo was carrying a small, BMX-style bicycle over his shoulder while riding in the oncoming traffic lane on 7th Street.

Due to several recent overnight bicycle thefts in the area, the officer intercepted the pair and asked if Naranjo wouldn’t mind letting him check the bicycles’ serial numbers.

Naranjo consented and said he was carrying the bike because it had a flat tire. He added that one of the bikes was his and the other belonged to his friend.

As he was turning the bikes over for inspection, the officer noticed Naranjo was holding a needle in his hand. The officer was then notified by another officer that it appeared Naranjo had dropped a small baggie on the ground. The baggie contained half a gram of meth, and Naranjo confirmed its contents and that he had dropped it, according to the report.

The bicycle check came back with negative reports of either being stolen, and they were left at a residence on 7th Street at Naranjo’s request. He was then booked into the jail on charges of possession of a dangerous drug and possession of drug paraphernalia.

Later that day, a warrant for Naranjo’s arrest was issued out of Safford Municipal Court for failing to appear on charges of criminal trespass in the second degree and theft. Naranjo did not appear because he was already incarcerated.

Officer assaulted by man admitting to be drug dealer