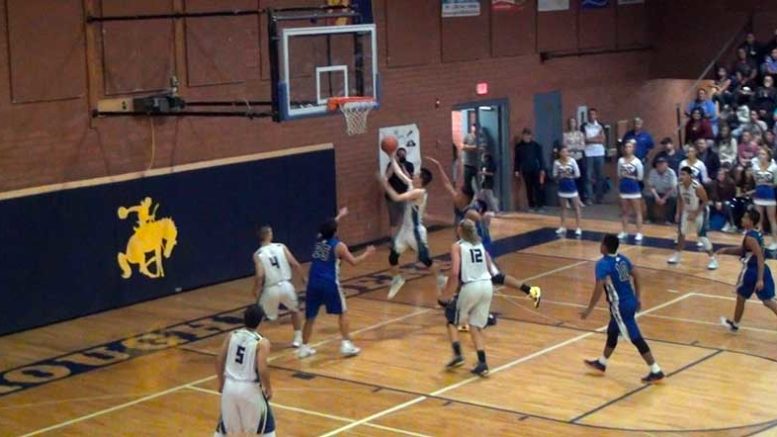 Jon Johnson Photo/Gila Valley Central: Trey Thompson scores on the way to a 63-43 victory over the visiting Fort Thomas Apaches.

PIMA – The air was thick with the hot musk of sweat. The players stood breathing heavily with hands on their shorts.

What had been a 1-point game suddenly became a difference of 11, and by the sound of the last whistle, the Fort Thomas Apaches had been run out of the gym by the Pima Roughriders, who emerged with a 20-point victory, 63-43.

“That’s a good team,” Pima head coach Cliff Thompson said of Fort Thomas. “They’ve got four really good offensive players. I’m really impressed with their guards and the Talgo kid is tough inside. They’re a tough team to defend, and I think we did a really good job defending them, especially in the second half.”

Fort Thomas came into the contest as an underdog, but in the first half the strategy of playing zone defense paid dividends and the Apaches were able to match the Roughriders nearly point for point. 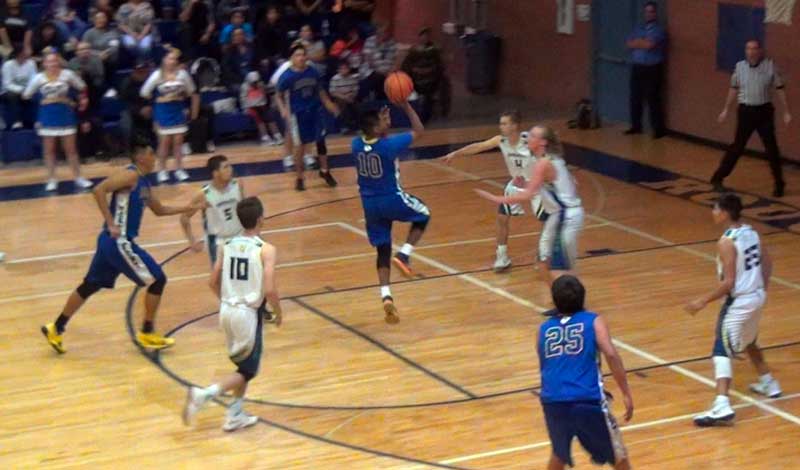 There are a couple sure-fire ways to beat a zone defense, however, ball movement, knocking down open shots (especially 3-pointers) and driving the ball into the heart of the zone. As the game progressed, Pima did a good job in each of those aspects, knocking down nine shots beyond the arch – five from Frank Gutierrez alone – penetrating the zone and passing off to open teammates and knocking down the mid-range jumper.

Dawson Pruzynski led the Roughriders with 18 points on 6-11 from the field and 6-8 from the free throw line. While it seemed he had a quiet first half, it was actually balanced with 9 points scored in the first and second halves each.

“I had first-game jitters and they got under control and I played my game,” Pruzynski said. 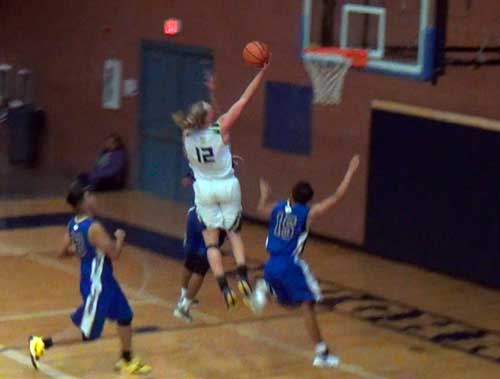 After the teams matched opening 3-pointers with Gutierrez and S. Kindelay from Fort Thomas, Pima opened up a 7-3 lead after Trey Thompson hit a jumper, followed up by a layup.

The Apaches struck back, however, behind a beautiful tear-drop shot by M. Rogers, followed by a 3-pointer by Kindelay to take the lead from Pima, 8-7.

Pruzynski made himself big down low and put in an and-one followed up by two more free throws. With just 8 seconds left in the quarter, Thompson then went coast-to-coast and scored a layup to put Pima up 14-13 at the end of the first period.

The action continued similarly in the second period, with K. Talgo and Kindelay playing a nice, two-man, inside, outside game. Pima continued to hit from deep with 3-pointers by Andrew Taylor and Gutierrez, and after exchanging the lead one more time the Roughriders went into halftime up, 26-23. 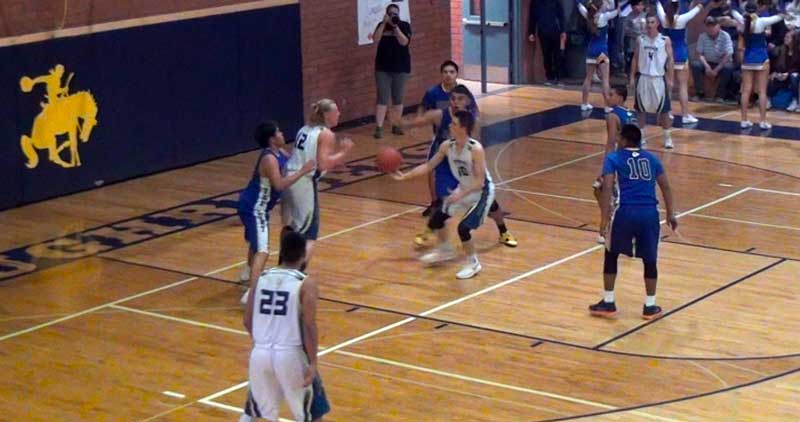 While the Apaches offense faltered, Pima’s continued to thrive as Gutierrez hit three, 3-pointers to finish with 15 total points and Thompson added 7 second-half points to finish with 13 on 5-11 shooting from the field.

“I think we have some strong guards, but we also probably have the best big man (in) Dawson, so we gotta get him the ball too,” Trey Thompson said. 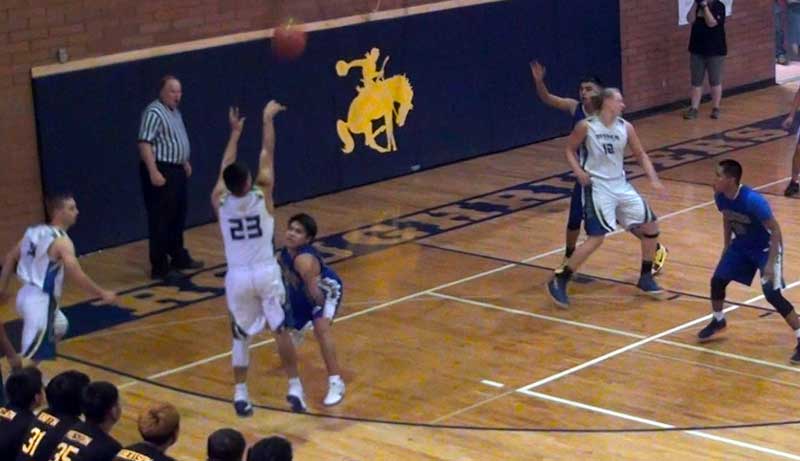 The Fort Thomas head coach said his team got worn down the longer the game went on and said it was partly due to Pima’s efforts and his team just seeing action for the first time this year.

“The game was intense and they kind of got tired,” he said. “We’re just barely starting the season – it’s ok, it’s just our first game. We’ll get there.”

Cliff Thompson also gave credit to defensive changes made at halftime that altered their emphasis. 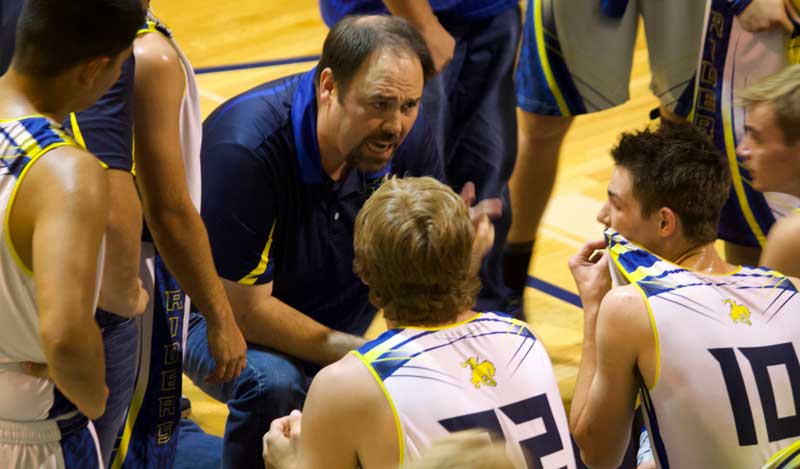 “It made it harder for them to do some of the things they were doing,” Cliff Thompson said. “We were able to turn defense into offense, knock down a few shots and went on a little run.”

The fourth period saw more of the same, with Pima extending its lead to 20 points, 57-37, with more than 4 minutes left to play. Pima then emptied its bench, and the players kept the lead to end the game 63-43.

“We just gotta keep working on the things we need to and see how it turns out,” Trey Thompson said.

Pima will next travel to Miami to battle the Vandals on Nov. 28 at 7 p.m.

In other Gila Valley basketball action:

The Safford girls team hung on to beat Winslow, 60-57.