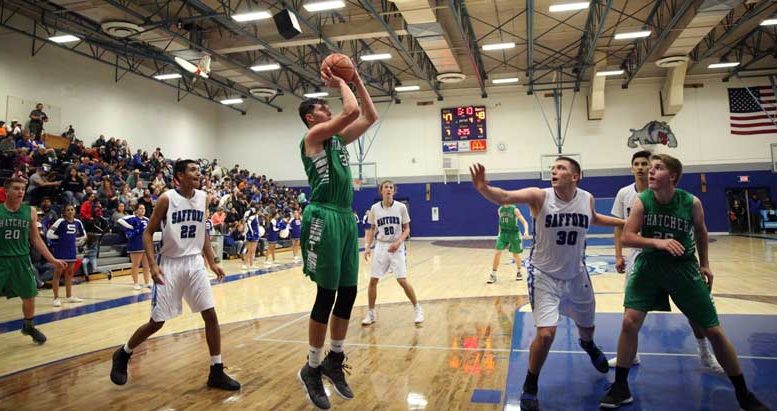 Photo By David Palmer: Thatcher's Cole Motes hits a jumper as part of an 8-0 fourth period run to help push Thatcher past Safford, 66-56.

SAFFORD – An 8-0 run in the middle of the fourth period ended up lifting the visiting Thatcher Eagles (1-0 conference, 3-0 overall) over the host Safford Bulldogs (1-1 conference, 1-2 overall) at Norma Bellamy Gym on Tuesday, 66-56.

Both teams brought their Windex to the event, with Safford doing work on the offensive glass for 16 rebounds and 30 total while Thatcher had less offensive rebounds, 11, but finished with more overall at 33 on the night.

After being held in check for most of the game, Thatcher’s big man Cole Motes stepped up when his team needed him most and hit three consecutive shots during the run, scoring off an inbounds play, an offensive rebound putback and on an assist from Brock Layton. 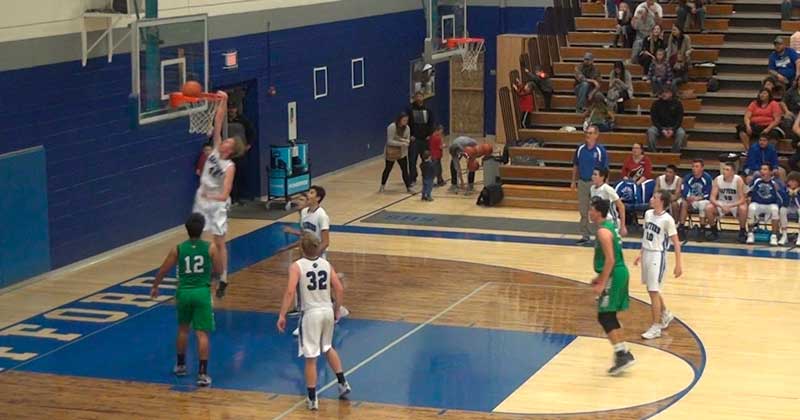 Motes said it always feels good to beat Safford but that his team was already focused on its upcoming Round Valley Roundball Tournament. He credited his teammates for his high performance.

“Our guards were doing a good job of getting inside and looking for the kick out,” he said. “

Motes finished with 18 points on the night with all but 4 points scored in the second half. Thatcher head coach Chris Riehemann said the game plan was to get the ball inside but that it took a while to execute.

“We were kind of pleading with our guys to get the ball close,” Riehemann said. “It took us about three-and-a-half quarters to kind of get it down there, but once we did I thought we had a lot of success with it.”

Layton, who also hit with a floater during the fourth-period run, conversely did most of his damage in the first half when he hit four 3-pointers. Layton finished with a game-high 25 points.

Things started off good for the Eagles as Motes won the tip and Layton hit a 3-pointer from the corner. 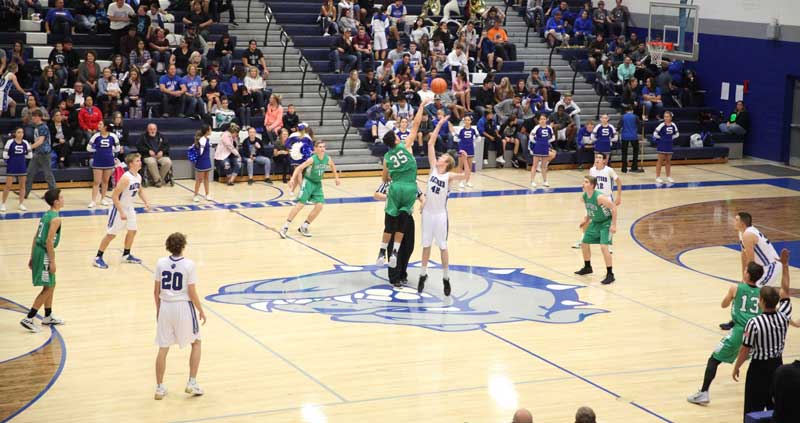 Safford hit right back as sophomore Collin Thompson wouldn’t be denied on his drive to the bucket. Thompson led the way for the Bulldogs with 17 points on six field goals and 5-7 from the free-throw line.

However, the Eagles responded with a deep 3-pointer by Trenton Ferrin, who finished with 10 points – all in the first half.

The game ebbed and flowed throughout the first half, with both teams committing a number of turnovers. For the game, Thatcher finished with 28 turnovers compared to 23 for Safford. 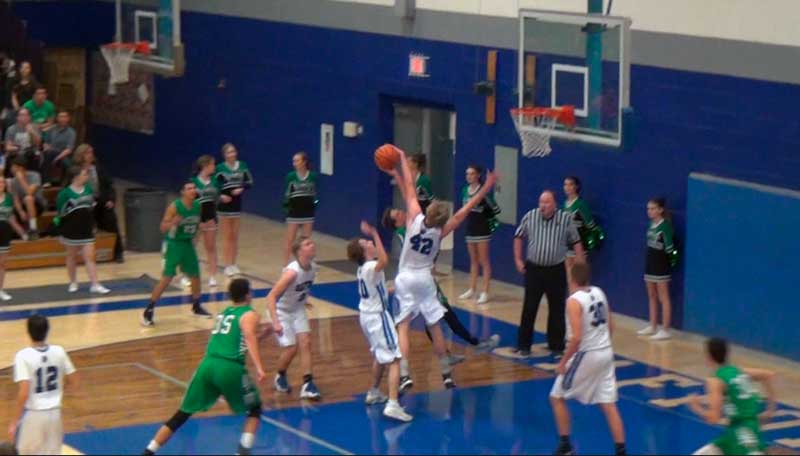 The Eagles stretched their lead to 9 in the second period, but Thompson kept the Bulldogs within striking distance by backing his man down low for the score and tossing two assists to Jejdrique Chavez, who hit on two layups; the second off a turnover caused by a quick poke of the hands by Thompson. The Eagles still led by 5 however as the teams broke for halftime, 36-31.

Safford came out running in the third period as Dominic Gutierrez twice led fast break outlet passes off defensive rebounds to a streaking Andrew Smith, who had managed to beat Thatcher down the floor for two layups.

It was another assist by Gutierrez – this time off a turnover – that gave Safford its first lead of the night, 41-40, as Marcus Castro scored on the fast break layup with 1:41 left in the third period.

The lead didn’t last long, however, as Thatcher’s Matt Palmer intercepted a pass and took it coast-to-coast for the layup to retake the lead. Palmer then followed that up with a baseline drive that found its mark to extend the lead. 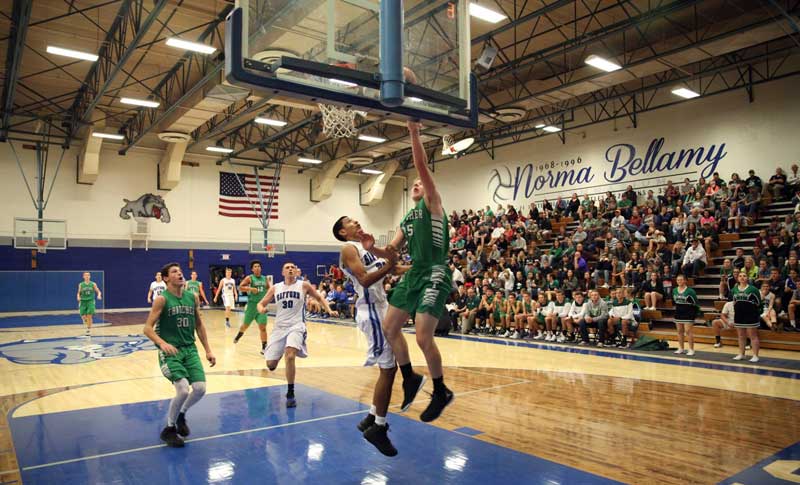 Photo By David Palmer: Thatcher’s Matt Palmer takes it hard to the glass for two.

The Bulldogs’ Drew Cochran popped open under the basket on an inbounds play for the easy score, however, and the Eagles’ tenuous lead had whittled to just 1 point, 44-43, at the end of the third period.

Cochran then scored again on a fast break layup and Safford retook the lead, 47-46, with 6:40 left in the game. 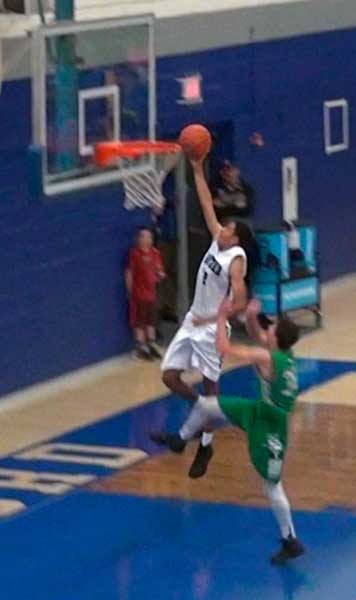 Jon Johnson Photo/Gila Valley Central: Marcus Castro lays one in for Safford’s first lead of the night late in the third period. It would not last long.

That’s when Motes stepped up and put the team on his shoulders as he led the Eagles on an 8-0 run to put the game out of reach.

“I thought we did a good job on him all night,” Williams said. “He wasn’t a factor in the first three quarters.”

Williams second-guessed his substituting pattern and said Thatcher might have been a bit fresher than Safford in the deciding period due to utilizing more players throughout the game.

Palmer hit a nail-in-the-coffin 3-pointer to go up by 12, and while Safford never quit fighting, Thatcher hit its free throws down the stretch (as it had all game going 14-17) and came away with the victory, 66-56.

“Over the course of 32 minutes there’s going to be good things happen and there’s going to be bad things happen,” Riehemann said. “We just try to keep our poise and composure, and I thought (in the) second and third quarter they did a real good job defensively against us, and I thought (in) the fourth quarter we shared a little bit better and had some good looks toward the basket.”

In other Gila Valley prep action:

The Pima Roughriders (5-0 conference, 6-0 overall) continued to dominate their opponents with a 62-26 shellacking of the Bisbee Pumas (1-2 conference, 4-3 overall). Pima will next travel to Flagstaff on Dec. 7 for its Holiday Basketball Tournament and will initially face the Payson Longhorns.

The Morenci Wildcats (2-0 conference, 3-0 overall) continued their winning ways against Cochise County teams with a 49-39 victory over the Willcox Cowboys (0-3, conference, 0-3 overall). Morenci will also next travel to Eager for the Round Valley Roundball Shootout Dec. 7-8 and will face the Alchesay Falcons, the St. Johns Redskins, and the Holbrook Roadrunners.

The Fort Thomas Apaches (3-0 conference, 3-2 overall) beat the Ray Bearcats (2-1 conference, 2-1 overall), 67-33 and will join the other Gila Valley teams in Eager. The Apaches are scheduled to face Round Valley, Pinon, and Alchesay.