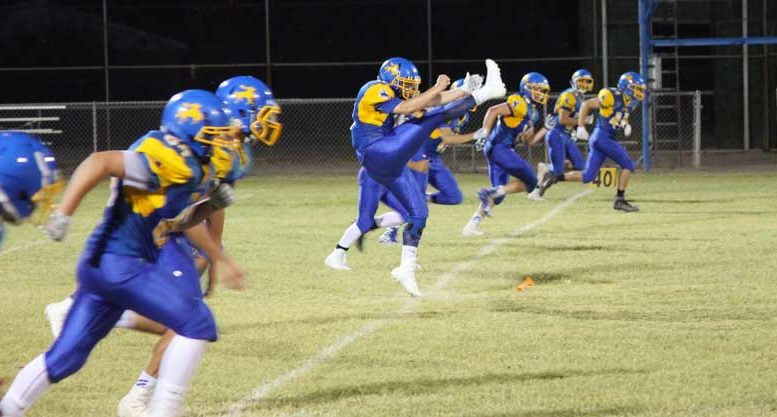 Photo By L. Scott Bennett: The Pima Roughriders ran all over the Tombstone Yellow Jackets and left with a 60-7 victory.

PIMA – It was all Pima all night long as the Roughriders improved to 3-1 with a victory over the winless Tombstone Yellow Jackets at Edd Hubbard Field on Friday night. Crisp offense and a lockdown defense gave Pima a 60-7 win and sent the Yellow Jackets back to Tombstone with an 0–4 record.

The game started with excellent defensive play by the Roughriders.  After holding Tombstone on downs on its first possession, Pima started scoring as soon as they had the ball. Senior Aaron Judd powered the ball in on the ground giving the Roughriders the early lead. 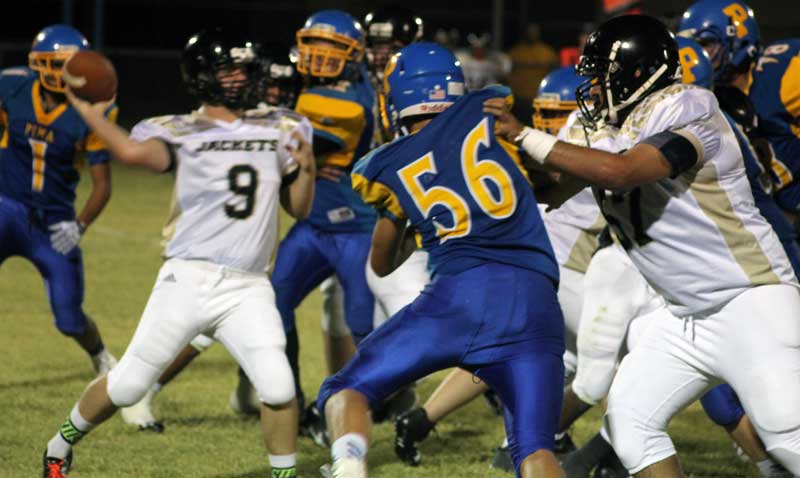 In only a matter of seconds, the Roughriders were back in the end zone, this time compliments of the Pima defense. On the first play from scrimmage, Tombstone fumbled the ball and it was scooped up by senior Frank Gutierrez, who scampered for 30 yards and a Roughrider score. After the 2-point try was successful, the Roughriders were up 16-0.

The Pima defense continued to play excellent ball. On the ensuing possession, the Yellow Jackets were held three-and-out. After a Tombstone botched snap on a would-be punt inside its own 20, the Pima defense recovered the loose ball for the Roughriders inside the Tombstone 5. The Pima offense then hit pay dirt on the very next play as senior quarterback Josh Whitaker handed off the ball to his brother, Jacob Whitaker, who punched it in from the 5-yard line. After the score and the successful 2-point play, the Roughriders were up 24-0 with over six minutes left to play in the first quarter. 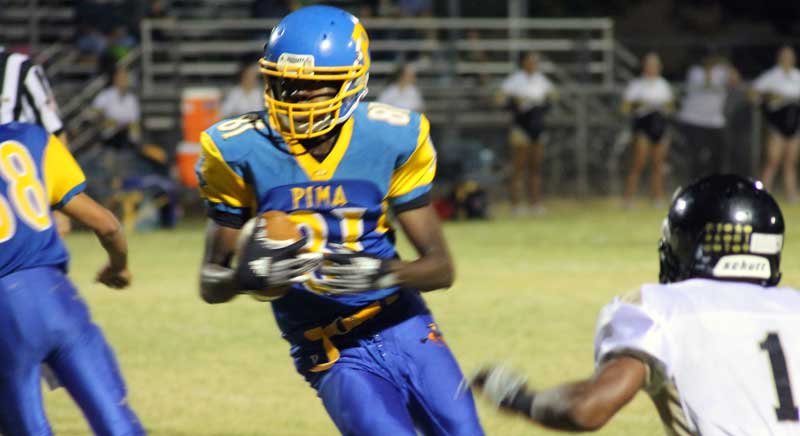 Photo By L. Scott Bennett: Edward Ebby-Young makes the most of his playing time and runs down the field.

Despite the early commanding lead, the Pima offense was not done in the opening period. The Roughriders punched it in two more times in the first quarter. The first of the two was when Whitaker called his own number and took it in for 15-yard TD run.

The second came after sophomore Brennon Hughes recovered a Tombstone fumble, giving the Rider offense a short field.  Senior Emilio Molinar then took a Whitaker handoff 20 yards for the Pima score on the first play of the series. As the first quarter expired, the Roughriders found themselves with a 40–0 lead. 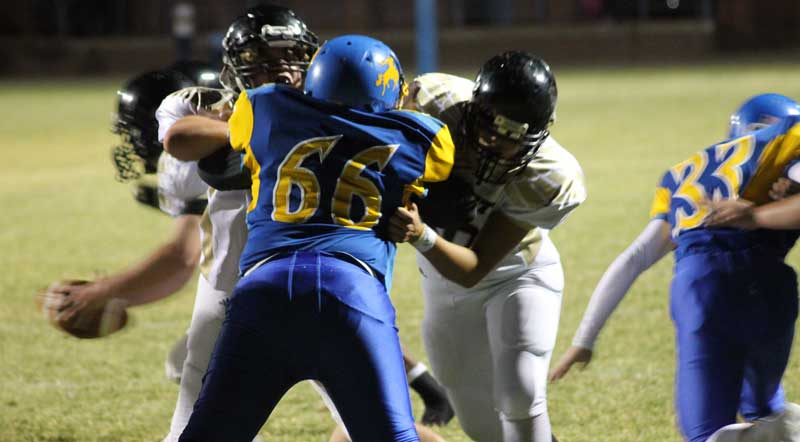 In an effort not to take advantage of a team rebuilding, Pima head coach Jace Hancock put in the second team at the beginning of the second quarter. While Pima did not score again in the first half, several underclassmen, including freshman were allowed to play in their first ever varsity game.

At the beginning of the second half, Pima allowed the starters one more series. This gave Judd the opportunity to hit the end zone one more time before the starters were pulled for the remainder of the game.

Based on the play of the underclassmen, it appears that Pima Football has a bright future beyond 2017. Playing in his first-ever varsity game, freshman Kaleb Blair intercepted the Yellow Jackets QB Andrew Hayhurst and returned the pic 19 yards for a Roughrider score. The touchdown was the second scored on the night by the Pima defense and gave the Roughriders a 54-0 lead. 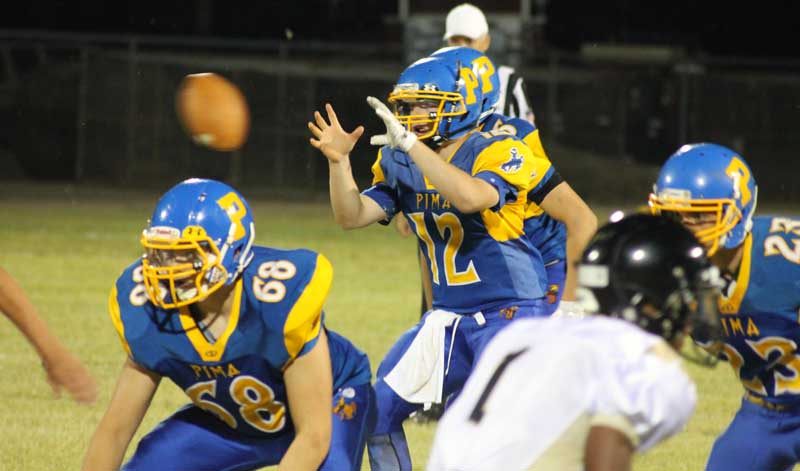 Pima would find the end zone one more time on the night. Another freshman in his first-ever varsity game, Uriel Murrieta, swept around the end and into the end zone for Pima’s final touchdown on the night. With the points added to the total, the Roughriders secured a decisive 60-7 victory. 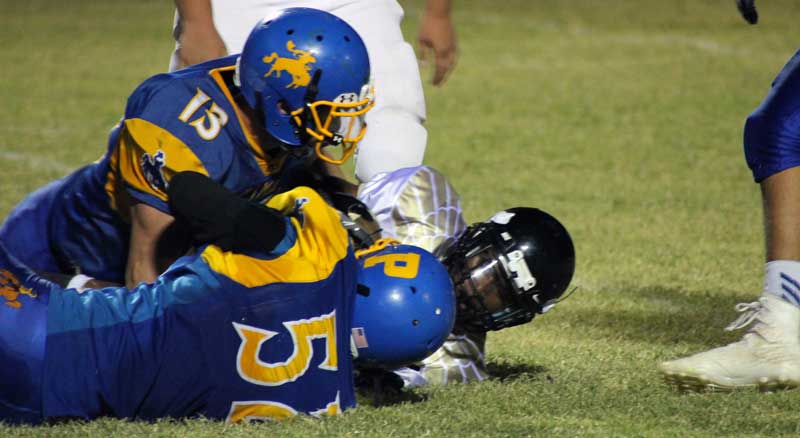 Photo By L. Scott Bennett: Pima allowed its junior varsity players a lot of playing time in the blowout.

After the game, Hancock was extremely complimentary of both teams.  He said he recognized Tombstone was in a rebuilding year and indicated that he was impressed with how hard their squad fought under the circumstances. Hancock went on to explain that there are no glory hounds on his team.

“Everyone who works hard gets a piece of the pie (referring to playing time) and no one is more worried about personal stats than the good of the team,” he said.

Coach Hancock elaborated that the upperclassmen were happy to see the younger boys get some playing time.

“We just want to win, but we want to make everyone feel good about it,” he said. 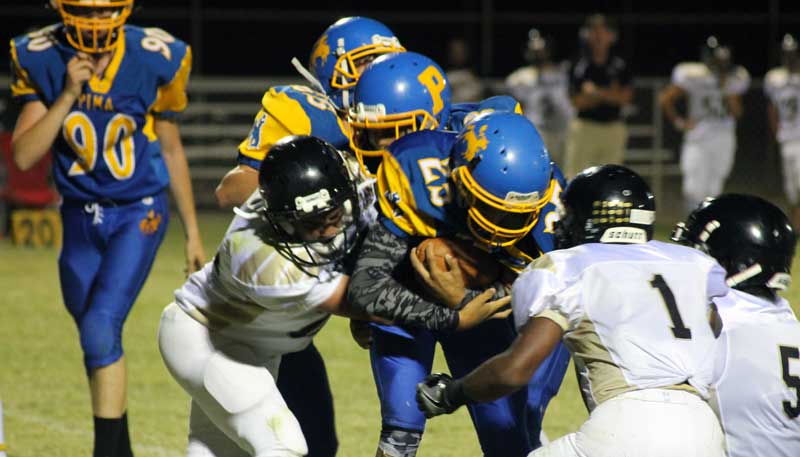 Photo By L. Scott Bennett: It takes a host of Yellow Jackets to take down Roughrider Aaron Judd.

Pima did just that Friday night. By not embarrassing a team having a rough season and letting a lot of underclassmen play who may otherwise be years from the lights of Friday night, Hancock and the Roughriders won with grace and class.

Pima will celebrate its homecoming next week when the Roughriders take on the 2-1 Bourgade Catholic Golden Eagles on Friday, Sept. 15 at Edd Hubbard Field in Pima.