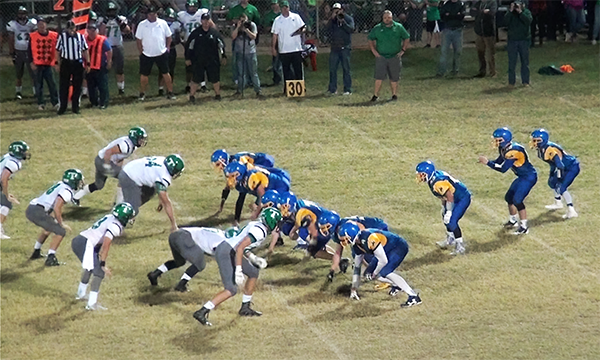 Pima put a damper on St. Johns’ homecoming as the Roughriders welcomed back starting quarterback Joshua Whitaker, who served his one-game suspension during a 54-14 loss to rival Thatcher on Sept. 23.

Whitaker got the Roughriders moving by finding his two favorite twin targets early and often as 6’6” senior receivers Jarrett and Justin Kartchner both had big catches on Pima’s first scoring drive.

The Roughriders’ first score of the night came on the ground, however, as Emilio Molinar took it in from 22 yards. The 2-point conversion was successful, and Pima took an early 8-0 lead over its host.

While its offense showed pose in Whitaker’s return, the Roughriders’ defense is what allowed it to control the game. St. Johns first half possessions went nowhere, resulting in five punts, two interceptions and a lost onside kick. The stifling defense allowed Pima to operate on the St. Johns side of the field for nearly the entire game.

While Pima also had five turnovers on the game, its defense recorded two scores off interceptions of two St. Johns quarterbacks. Pima held St. Johns to 160 yards rushing and 71 yards passing on the night.

After punting early in the second quarter, Pima got the ball back when Manny Rivera stepped in front of Redskins’ quarterback John Robertson’s pass and took it about 15 yards to St. Johns’ 17 yard line. The Roughriders moved the ball to the 1 yard line on a Whitaker connection to Justin Kartchner, but soon faced a third and goal from the 11 after being pushed back. Whitaker then hit Justin Kartchner again, this time all the way into the end zone for the 11-yard score.

Pima recovered the onside kick but immediately gave the ball back to St. Johns on an interception. The Redskins couldn’t capitalize on the turnover, however, and were forced to punt.

Pima made the most of the opportunity. After moving the ball downfield, Jarrett Kartchner wrestled the ball away from the defender in the back of the end zone to come up with the 21-yard touchdown catch. Pima was up 22-0, but it wasn’t finished with the half quite yet.

With time  running out in the second quarter, Ryne Lewis intercepted Robertson and made a stunning return 40 yards in and out of St. Johns players for the score. The 2-point conversion was no good, and Pima headed into halftime leading 28-0.

“I thought we came out harder than we have all season (in) the first half,” Whitaker said. “I think Thatcher was a wake-up call for us. Our running backs hit the holes hard and the passing game was amazing last night. (I’m) just really proud of my team yesterday after taking that loss two weeks ago.”

On its first possession in the third quarter, Pima faced a fourth and inches from St. Johns’ 19 yard line. Whitaker lunged into the middle of the line and went 4 yards before he was stopped. Pima then scored on the next play on a 15-yard TD pass to Jarrett Kartchner.

St. Johns finally got on the board after the kickoff when Joseph Ramsey burst through the line on his way to a 68-yard rushing TD. The 2-point conversion was no good, and Pima was up 36-6 with 8:06 left in the third quarter.

Things got a little chippy on the Roughriders’ next possession, and the Redskins’ Diego Hernandez was ejected after he retaliated over a cut block. The play slowed down the action, as the teams then punted on their next four combined possessions.

Pima pushed forward in the fourth quarter, however, and the Roughriders soon found themselves first and goal from the 1 yard line again. However, just like last time, they were pushed back to eventually face a fourth down and goal from the 11. Whitaker dialed up a pass to Jarrett Kartchner, but the big man couldn’t break the plane and was stopped at the 2 yard line.

The disappointment didn’t last long, however, as Jarrett batted a pass from Trent Sherwood into the air and Ryne Lewis came down with it in the end zone for his second defensive score on the night.

With substitutes in, St. Johns scored on a 42-yard screen pass to Dillon James with just 26 seconds left in the game to bring the final score to 44-14.

Pima will next face winless San Carlos (0-7 overall, 0-4 section) at home before hosting a big game against unbeaten Eager Round Valley (8-0 overall, 4-0 section), which currently sits atop the 2A East Section. Round Valley will host Thatcher (6-1 overall, 3-0 section) this Friday.