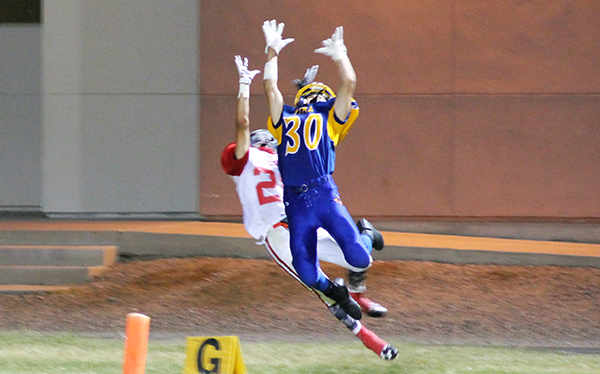 The Pima Roughriders (3-0) remain undefeated after a decisive victory over the Bisbee Pumas (0-2) Friday night.  In a game that would see the Roughriders find the end zone six times, the Pumas only sneak in twice and a player from each team ejected, Pima would win 44 – 14.

Pima started fast, scoring less than two minutes into the game.  After Bisbee took the opening kickoff, Pima held the Pumas to a three and out.  Bisbee attempted to punt, but Roughrider junior Ryne Lewis blocked the attempt, scooped up the loose ball and returned it 34 yards to put Pima on the board, 6-0.

The teams appeared evenly matched through much of the first quarter, however, as the first period expired, the Roughriders had the ball on the Puma 1-yard line.  On the first play of the second quarter, junior Manuel Rivera swept around the end and, after the extra point, Pima led 13 – 0.

Not to be outdone by the offense, the defense played a major role in the Roughrider win.  Holding the Pumas to 14 points on the night, the defense came through with key plays throughout the evening.   Junior Emilio Molinar picked off Bisbee quarterback Tony Ferestad to get the ball back to the Roughriders midway through the second quarter.   This set up a 67-yard pass from Whitaker to junior Trey Thompson, which allowed junior Aaron Judd to rush the ball up the middle for the score, giving Pima a 26 – 0 lead.

The roughriders would hit paydirt one more time in the first half when Molinar, now playing offense, swept around the end and punched it in.  With the score, the Roughriders took a 34 – 6 lead into the locker room. 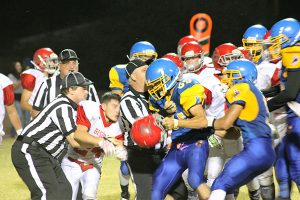 While the Roughriders played great football, the team did not have a perfect night.  The offense lost a fumble when they were in the red zone in the third quarter and the defense gave up multiple first downs on fourth down plays.  While there is room for improvement, these mistakes pale in comparison to the excellent play of a team who was well prepared.

In perhaps the most disappointing play of the night, Roughrider Colton Smart and Bisbee’s Sergio Montoya were both ejected from the game for their part in a fight which broke out halfway through the third quarter.  Officials reported both players threw punches, and it was clear that Smart had ripped off Montoya’s helmet.  After the brawl, the line judge indicated he suspected both players would be suspended from their team’s next game and likely the next two.  Despite the fight, the officials quickly regained order and both teams played the remainder of the game without incident.

Pima scored one more time on the night late in the third quarter when Molinar got his second rushing touchdown of the evening.  After senior Henry Boswell ran it in for a successful 2-point conversion, the Roughriders had hung 44 points on the visiting Pumas and would win the game with a final score of 44 – 14.

After the game, Pima Head Coach Jace Hancock praised his players as well as the Pumas, explaining that “Bisbee has a lot of big, strong players” who are well coached and played great ball.  Hancock went on to say that he wants to get ready for next week and will be taking the games one at a time.  While he was concerned with the multiple successful fourth down conversions by Bisbee, he believed his defense played hard and will be ready for their next contest.

After the loss, Bisbee fell to 0 – 2 and will take on Phoenix Christian next week in Phoenix.  With the win, the Roughriders remain undefeated at 3 – 0 and will travel to Tombstone to take on the Yellow Jackets (2-0) next Friday night.