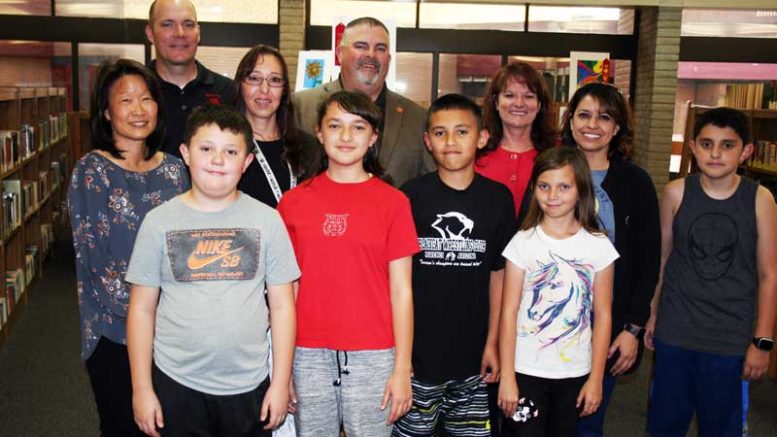 MORENCI – Rube Goldberg first appeared in American newspapers nearly a century ago. So, these many years later, what is the appeal for the cartoon strip to people as young as Morenci Fairbanks Middle School Principal Ana Van Ziel or school robotics teacher Laura Dorrell?

For that matter, what is the strong appeal to the very young such as those who attend the middle school?

The appeal appears to be an opportunity to think out of the box and to foster creativity, including learning about weighty matters such as science and engineering.

To apply the somewhat zany principles from the world of Rube Goldberg requires a great deal of motivation, deep thinking, and creativity, all the while creating something that is well beyond the norm of how one perceives what would otherwise be a simple task. 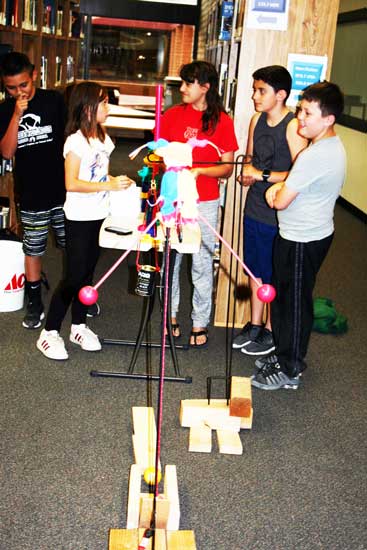 Photo By Gualterio Casias: Members of the Morenci Fairbanks Middle School Rube Goldberg Club demonstrate to the Morenci School Board a Rube Goldberg contraption they made using basic science and engineering. Club projects involve creating complicated gadgets that perform simple tasks in an indirect, convoluted way. In this case, marbles were placed into a tube and the marbles eventually rang a bell at the end of the contraption.

Students involved in Morenci’s Rube Goldberg Club are learning about what “thinking out of the box” can achieve and how cleverness and ingenuity can produce.

Club members gave a presentation to the Morenci School Board at its Nov. 15 meeting. Board members appeared to be very impressed. Expressions on the board members’ faces, as well as that of Morenci Superintendent Dr. David Woodall, were those of curiosity and fascination. The same applied to the many parents and others who packed the board meeting room.

The presentation involved loading marbles into a tube. The marbles rolled their way through a rather elaborate contraption to ring a bell. The contraption included the use of wooden blocks, which had to be placed perfectly to provide the correct balance for the marbles to reach the bell. Of course, using a marble to ring a bell could more easily be done by simply placing the bell on a table or a floor and rolling marbles toward the bell. But that is not what using a Rube Goldberg approach is all about.

Ruben Garrett Goldberg, a scientist, engineer, sculptor, and inventor, drew the Rube Goldberg cartoon strip that began appearing in the 1930s in newspapers throughout the U.S. The strip appeared in major newspapers such as the New York Times. The popular cartoons depicted complicated gadgets that perform simple tasks in indirect convoluted ways. According to one website, “A Rube Goldberg Machine is a contraption, invention, device or apparatus deliberately over-engineered to perform a simple task in a complicated fashion, generally including a chain reaction.”

There exists Rube Goldberg, Inc., website which is dedicated “to keep laughter and invention alive.”

According to Dorrell, Van Zile “had earlier tried to start this. When she described it (to me) I got real excited and wanted to become involved.”

The club piqued the interest of Dorrell, who has a science background. She has a degree in molecular cellular biology from the University of Arizona.

The club was launched at the beginning of the current school year and students’ interest in participating is growing, Dorrell said. As for those students already involved, “They’re highly enthusiastic. They seem naturally drawn to what we’re doing. Some of them would like to do it every day” but her schedule prevents her from being available daily. Dorrell is head of nursing at Gila health Resources in Morenci.

Rube Goldberg Clubs such as Morenci’s can compete on state and national levels. A national contest involves constructing a Rube Goldberg device that involves pouring a bowl of cereal into a container. There are different levels of competition based on age. There are divisions for those 8-11 years, which is where Morenci’s club falls, 14-18 years and Division 2, which is the college level.

Van Zile noted that involvement in something like robotics “scares some people off.” Whereas, the Goldberg Club is a rather fun way for students to learn about certain aspects of science.