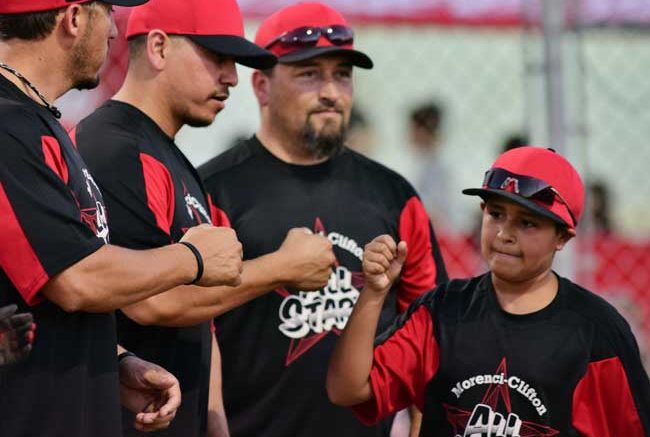 Photo By Raymundo Frasquillo: Morenci-Clifton coaches, from left, Jason McEuen, Tony Roybal and Jose “Pepe” Saenz greet Emilio Roybal and the rest of the team during player introductions prior to the start of the game. Morenci-Clifton fell to Pinal Mountain, 12-2.

Pinal Mountain Little League Majors earned the District 11 banner, going 4-0 with a 15-2 (60-6) average score per game during 18 innings, with a run-ruled 12-2 win over Morenci-Clifton during four innings at Safford High School on June 30. The district champions head to the Mesa-area state meet July 17.

Chris Guthrey is the team manager or head coach and his assistants are Leonard Aguirre and Dennis Palmer. 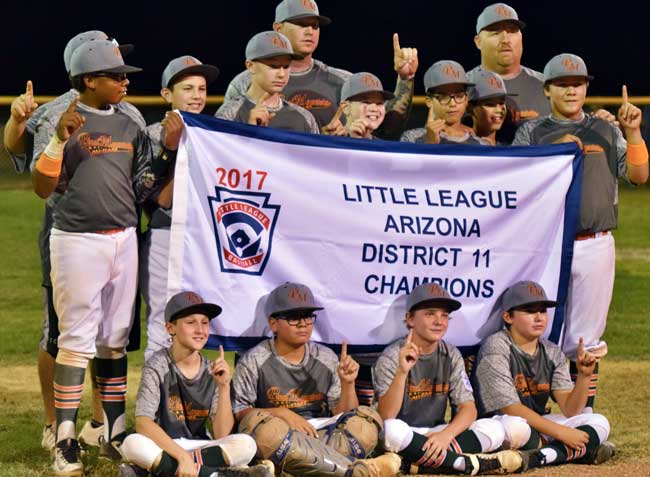 It was déjà vu; Morenci-Clifton stepped to the plate first as the designated visitor, as per a coin toss, going three up and three down, recording three strikeouts with its initial batters, as in the first pairing with the Gila County boys, June 28.

Morenci-Clifton drew a second-inning walk, but with Salazar taking the mound for the Gila County boys, seven consecutive strikeouts followed.

Pinal Mountain sent eight batters to the plate and led 6-0 before taking the field for a second time as the home team. With a walked runner on, a Salazar first-pitch swing resulted in a 2-run home run, clearing the 200-foot centerfield fence and resulting in a 5-0 advantage. An error set the stage for Garcia’s triple, but he was stranded as a pair of strikeouts, a walk, and an unassisted ground out to the pitcher retired the side.

The Gila County boys drew two walks to start their third inning and Salazar made the score 9-0, clearing the 200-foot left-centerfield fence with another first-pitch swing. A 1-2 count swing by Garcia sailed over the left field fence, scoring a walked Hayes and himself for an 11-0 advantage. Angel Pena added the final run, drilling the ball deep to left field, and recording an inside the park home run. Morenci-Clifton reliever Tony Roybal fanned two, loaded the bases with a pair of walks plus a beaned batter, before striking out the side.

Photo By Raymundo Frasquillo: Morenci-Clifton’s Shaun Hudman hydrates himself after getting back in the dugout. The boys had an ice-chest full of bottled water on hand throughout the tourney.

A two-out fielding error scored Morenci-Clifton’s walked Daylen Johnson and prompted another pitching change for Pinal Mountain. Gabe Hernandez doubled in Shaun Hudman and a strikeout ended the game with a 10-run difference.