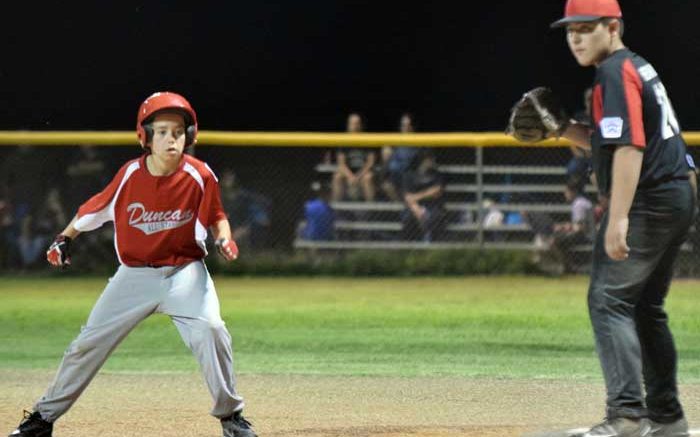 Photo By Raymundo Frasquillo: Duncan lead-off batter, Timothy Baca, scored twice, reaching first by getting beaned and on an error. However, Duncan succumbed 13-3 to Morenci-Clifton in four innings June 26. 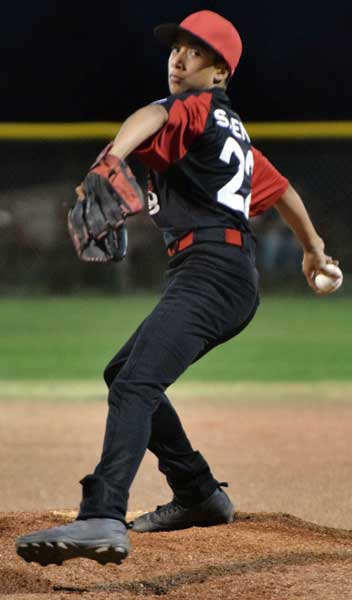 A pair of elimination games were held Tuesday (June 27), Kearny verses Hayden-Winkelman and Mount Graham verses Duncan with each team being 0-1. The winners meet at 7:30 p.m., Wednesday.

Morenci-Clifton trailed by a run during its initial plate appearance against Duncan as Daylen Johnson stepped to the plate with two outs. He dispatched a one-ball pitch over the centerfield fence to tie the score. The red and black-clad boys never trailed thereafter, adding three runs in the second inning to go ahead for good.

Ahead 4-3 in the bottom of the third, Morenci-Clifton’s Derek Saenz’ long rightfield blast allowed him to score behind Johnson at second. The team went through the entire batting order in the fourth, adding seven runs, six unearned, with the tenth batter at the plate. Lead-off batter, Tony Roybal, was walked and was singled in by Johnson, then Joseph Seballos walked and Johnson scored on a fielding error, a walked Shaun Hudman scored on a throwing error, a walked Gabriel Hernandez stole home with one out, and a walked Michael Casillas scored on a passed ball with two outs. The game was called on the 10-run rule.

Photo By Raymundo Frasquillo: Morenci-Clifton closer, Shaun Hudman, struck out one, walked one, and left with a 13-pitch count while facing three batters during one inning.