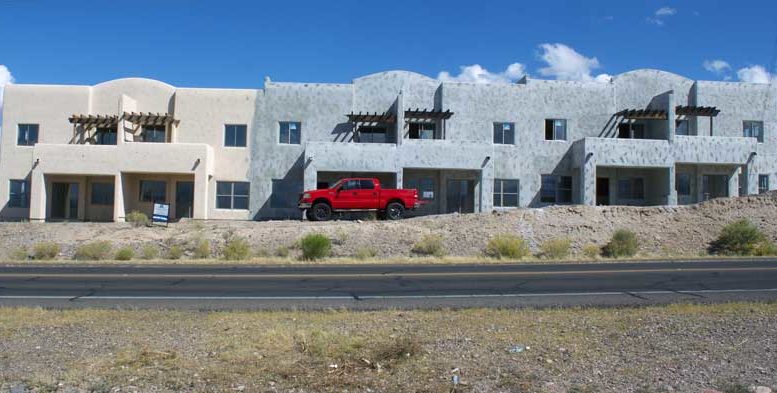 Jon Johnson Photo/Gila Valley Central: After laying unfinished and dormant for a decade, the townhouses off Reay Lane are getting a facelift and are being completed by Imperial Structures. The developer will also add a second, seven-plex building and more as demand warrants.

THATCHER – What has been a blight on the landscape near the intersection of Reay Lane and Ballpark Road will soon become a beacon of affordable housing in Thatcher.

It has been a decade since the former Cota EAC Townhouses project began with a six-plex of buildings. The 176-Platt townhouse subdivision would go no further due to Cota filing for bankruptcy Sept. 30, 2008. Construction recently began with a new owner, however, and the new Park Place Estates looks to fill the void left when Cota hit the road. 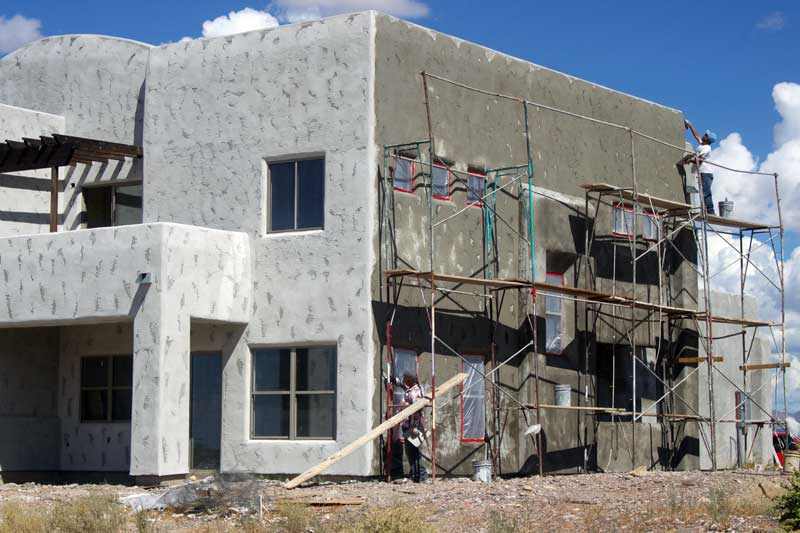 Jon Johnson Photo/Gila Valley Central: Stucco is applied to the third of three buildings that originally began construction 10 years ago.

Cota had been involved in several projects in the Gila Valley that were started and not finished. One project that was completed is the Cota Apartments at U.S. Highway 70 and Stadium Avenue. Cota had high aspirations for his housing projects before the housing bubble burst and even donated $1 million to Eastern Arizona College, still the college’s largest donation in its 128-year history. 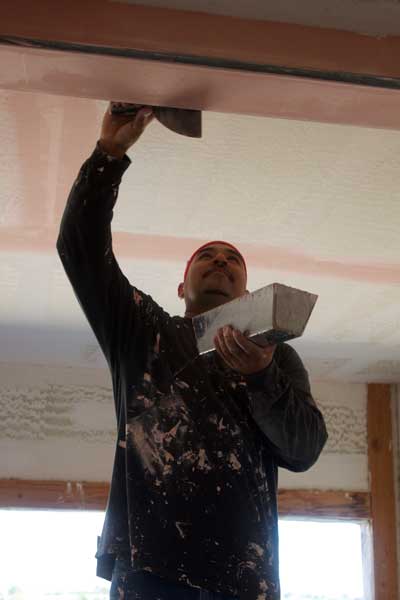 Jon Johnson Photo/Gila Valley Central: A construction worker applies plaster to the interior of a garage.

Brian Ellerman, the owner of Imperial Structures, purchased the half-finished buildings and adjacent land and has begun to complete the first six-plex. Ellerman told Gila Valley Central that he already sold four of the six townhouses and will start new construction on a seven-plex to the north of the current buildings after the six-plex is complete.

The townhouses sit atop a hill off Reay lane, and, with balconies on both the eastern and western sides, offer panoramic views of Mount Graham, the town of Thatcher and The Gila ValleyArizona Temple. All of the townhouses are roughly 1,700-square-feet, four bedroom and 2.5-bath units with garages and will feature a block wall with small front and back yards. Ellerman described the homes as being ideal for the first-time home buyer or as an investment home put up for rent. He added that the residences could be in high demand as Freeport McMoRan begins construction on its new Lonestar mine at its Safford Operations site. 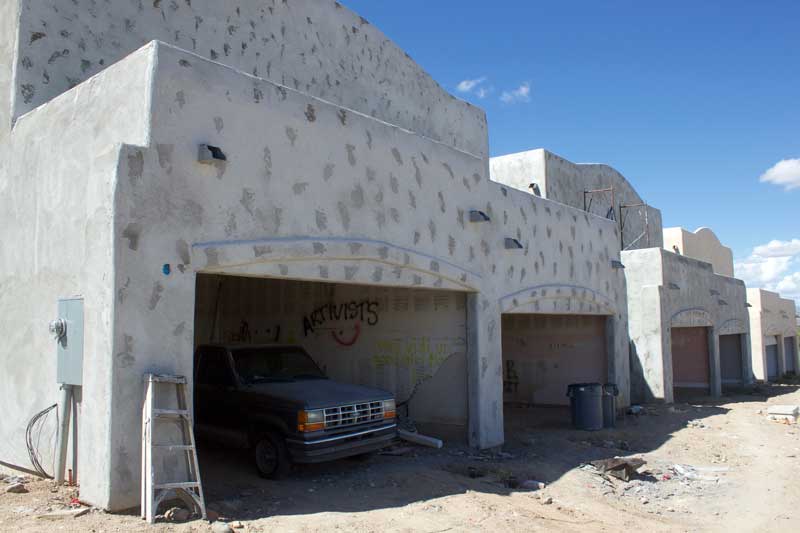 Jon Johnson Photo/Gila Valley Central: The unfinished homes had been a popular spot for vandals and graffiti.

“I think it will be good,” Ellerman said. “There is going to be a ton of contractors here, so there will be a huge demand for those type of homes.”

Being incomplete for so long with even two of the buildings not receiving stucco, the area was utilized as a hang-out spot and for graffiti and vandalism. Eventually, the town put up a chain link fence, but that didn’t appear to deter all of the vandals. 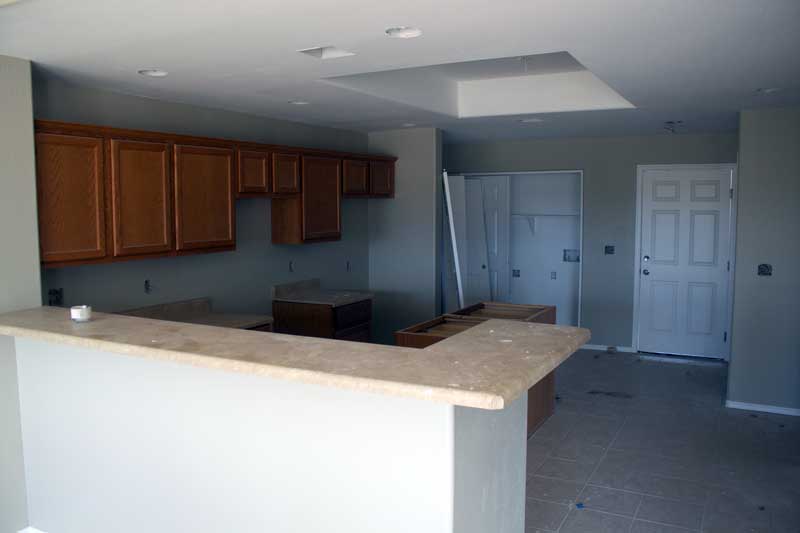 Now the blight is getting a facelift, with fresh stucco, paint and all the accouterments people look forward to in a new home.

While Ellerman only has the first 13 units set to be built he said he will continue to build them as the demand warrants. Per the Platt, there will eventually be an entrance to the subdivision off Stadium Avenue but initially, the only ingress will be from Reay Lane. Ellerman said CKC Construction will be doing the road and initially it will only include the current buildings and the seven-plex. He said the current, partially-built townhouses should be complete by the end of November and that he is selling the townhouses for about $160,000. 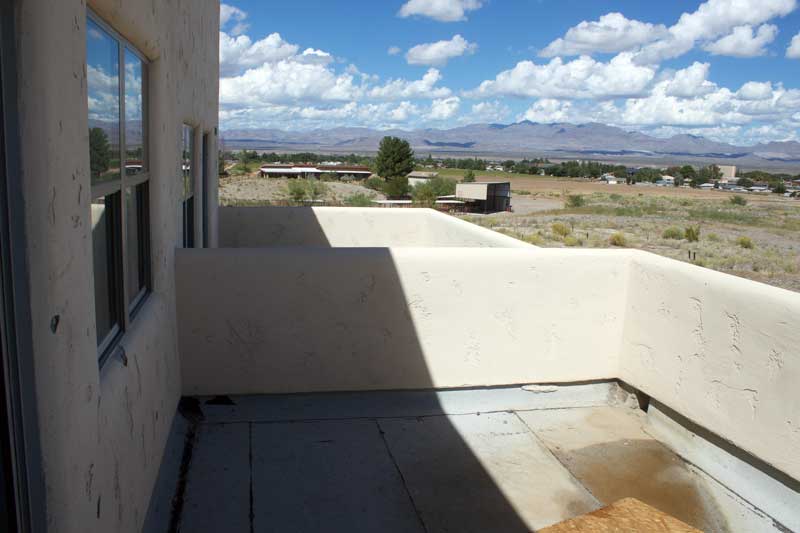 Jon Johnson Photo/Gila Valley Central: The townhouses feature panoramic views from their second stories on both eastern and western balconies.

“I don’t know if there is a demand for 176 townhomes, but we’ll just keep building as long as people want them,” Ellerman said. 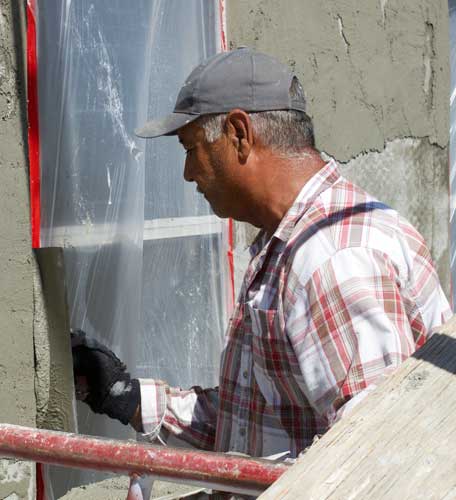 In 2011, the town of Thatcher settled with Lexon Insurance for $750,000 to collect on the bond for the original project. At that time, Thatcher Town Manager Terry Hinton said the money would cover the town’s attorney’s fees and costs in the settlement as well as repairing the sewer system, finish the water installation, grade the development to its final grade and install curb and gutters.

The money ran out pretty quick, however, and the town was only able to fix the sewer and water issues, according to Ellerman. He is footing the bill for the rest of the infrastructure, which will be built in phases as sections are constructed.

Ellerman will be listing the homes with PropertyWise, but until that is done, for more information on the Park Place Estates people can call him at his business at 322-5985. 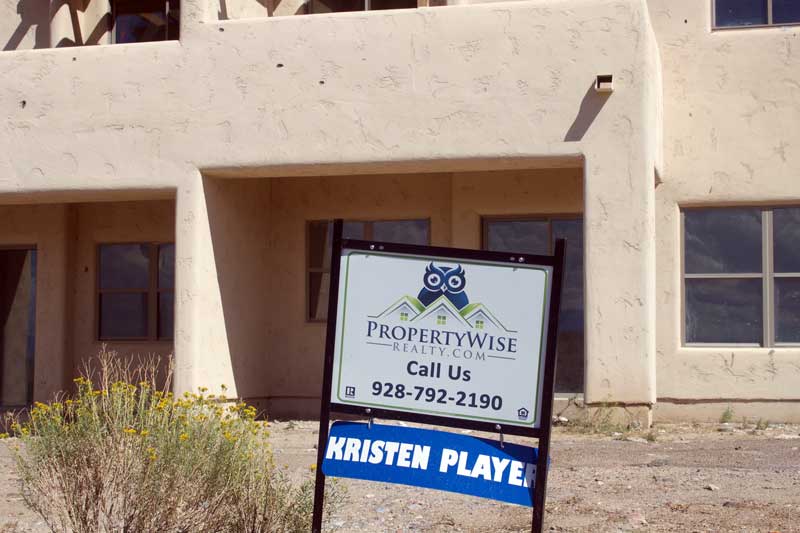 Jon Johnson Photo/Gila Valley Central: After 10 years, the townhouses off Reay Lane are being completed and are for sale.