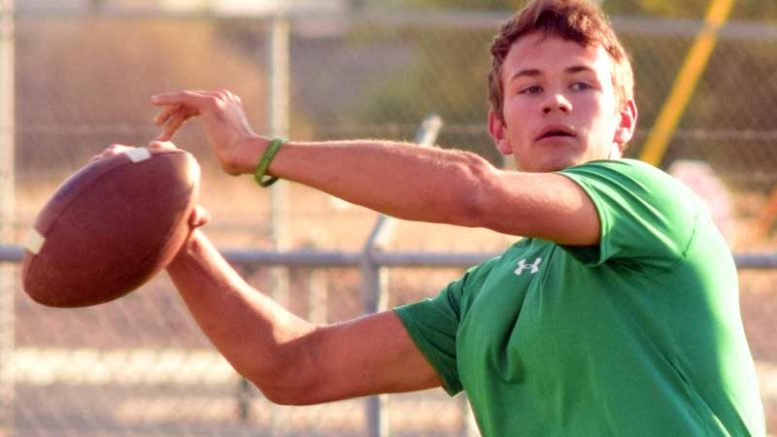 Photo By Raymundo Frasquillo: Thatcher quarterback Jack Kortsen looks for an open receiver during 7-on-7 drills at Safford High School.

It’s never too early to start talking football in the Gila Valley.

Photo By Raymundo Frasquillo: Safford receiver Gabe Ornelas leaps for a pass just out of his reach against Thatcher.

An opportunity to improve their football skills was too good to pass up for Morenci, Pima, Safford and Thatcher football players. They took advantage of 7-on-7 passing sessions at Safford High School’s Herman BB Andrews Field last Thursday (June 22), and  will do the same this evening (June 29).

A cooler, late evening start hopefully helps negate the high temperatures and plenty of water is provided by each team. Safford’s school trainer is also nearby.

“All the big schools do that and don’t have very far to go,” Safford head coach Michael Alba said. “We thought we’d do that too.”

Participants include those not out of town, involved in other sports or a conflicting summer job. Safford and Thatcher both had enough participants to permit rotating players often, while Pima needed to rely on players used as linemen last season and was a player short during the start of the sessions.

The field is divided in half, with one team on offense and the other on defense. The offense runs plays trying to advance toward the goal line until scoring or until a time limit is reached, then switches from offense to defense or defense to offense, whichever they just finished running. No score is officially kept, but coaches and players note what works, who gets open and who can catch a pass.

Players work on learning passing routes, catching passes and timing along with defending the opponents’ routes and pass catching abilities. Individuals see what they need to improve on personally and whether weight room sessions need to be adjusted.

The reward for participants is gaining experience and improving by the time the official practice sessions begin next month. 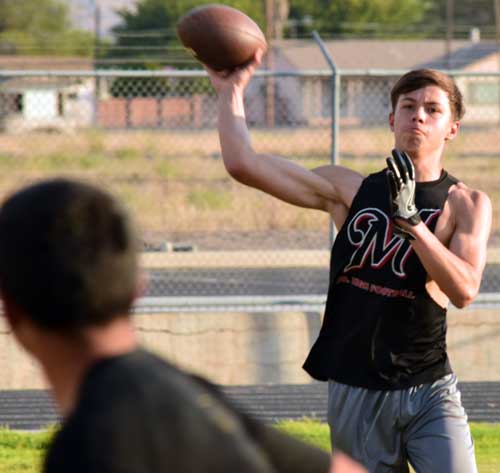