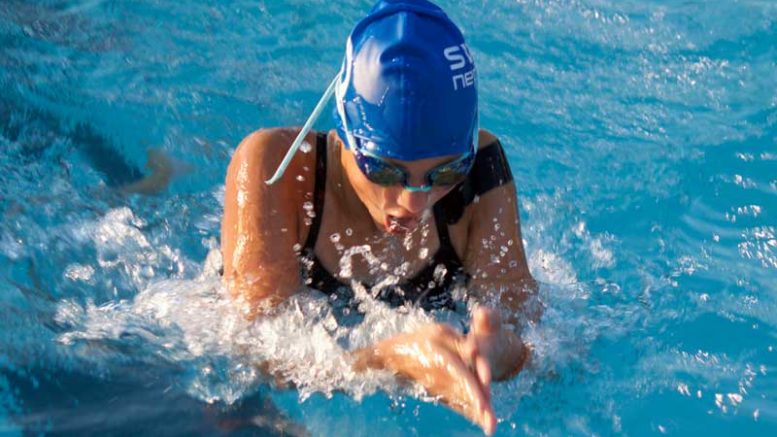 PIMA/THATCHER – The unofficial beginning of summer has arrived as the Gila Valley swim teams opened their season Friday with meets in Pima and Thatcher.

Jon Johnson Photo/Gila Valley Central: Swimmers warm up in Pima for the start of the swim team season’s meets.

The four-team league includes squads from Safford, Thatcher, Morenci (which has a year-round swim team) and Pima.

Thatcher hosted Safford at Eastern Arizona College’s pool and Pima hosted Morenci at its pool underneath the ominous sight of Mount Graham on fire.

With the summer swim team season lasting barely more than a month, coaches and swimmers have to gel quickly and work diligently. Still, the improvement over the summer-only swim team members from its first meet to finals is always apparent.

Safford Swim Coach Jordan Keith acknowledged the difficulties of putting everything together so quickly but said his team and staff were up to the challenge.

“We’re feeling a little chaotic but really excited,” he said. “There’s a lot of energy with the kids. I can tell once they start swimming they’re going to figure it out but these first few meets are really crazy. We have a lot of first-time swimmers who have never done this before, so they’re really excited to get in the water. A lot of them are doing butterfly for the first time in their life. They just learned it last week in practice, so they’re seeing it happen, so it’s really cool.” 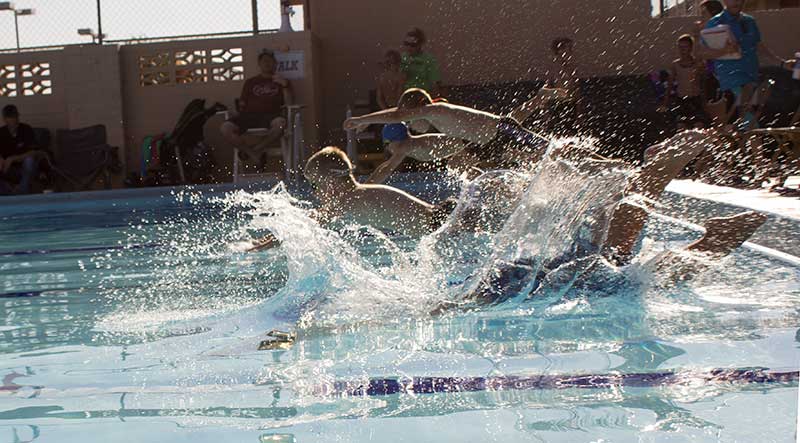 Brook Curley Photo/Gila Valley Central: Swimmers leap into the start of the swim season at a meet at EAC.

Keith’s son, Jaxon Keith, has been swimming for five years and exuded confidence at his performance in the first meet of the season.

“I always want to get first place,” Jaxon Keith said. “I swim fast. I’m going to do well in backstroke and freestyle.” 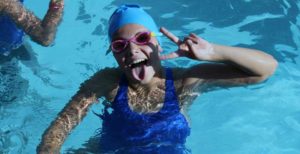 “Morenci and Pima both did great,” Goodman said. “The swimmers did an amazing job for the short amount of practice Pima had . . . We have a lot of new swimmers – our team is a lot bigger this year – and all the new ones did amazing as well.”

Pima definitely outnumbered Morenci and had several heats with nary a Morenci swimmer in a lane. But conversely, in the older age groups, Morenci had the only participants in most of the events.

Additionally, Morenci, which has a year-round swim program, had a few swimmers who blew away the competition in every race they entered, including Thaddeus Gray in the 13-14 boy age group, Quinton Wiltbank in the 11-12 boy age group and Avery Johnson in the 11-12 girl age group.

Gray, who has swam for the past seven years he has been in Morenci, took first place in every event he swam, edging out his closest competition, Israel Bernal, also of Morenci, each time. He said his favorite stroke is freestyle and applauded Pima on its hosting job.

Johnson, who is from Thatcher, shocked Morenci last year with an upset victory in the girls 11-12 individual medley at finals while swimming for Thatcher. Johnson then switched teams to Morenci to take advantage of the full-time swim season, much to the chagrin of her old Thatcher coach Lori Christensen.

“My (Thatcher) coach yelled at me when I left,” Johnson said. 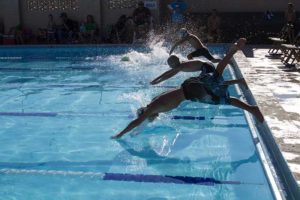 Safford swimmer Kati Moore said she loves to swim but was a bit apprehensive about the competition aspect.

“I like swimming because it’s nice to get in the water when it’s hot outside,” she said. “I’m a quarter excited and three-quarters nervous.”

Jon Johnson Photo/Gila Valley Central: Giselle Nevarez (Morenci) races to the other side.

Goodman said she had equally good aspirations for how the season will go for the Pima swimmers.

“It’s going to go great,” Goodman said. “They’re going to do amazing. They practice hard every morning. I think they all work well together, and they’re all great swimmers.”

With the sun set, the lights turned on and the heat of the day replaced with the cooling night as splashes from dives turned from a welcome respite to something to be avoided, the final races were won and the teams capped off the opening night of the 2017 summer swim team season.