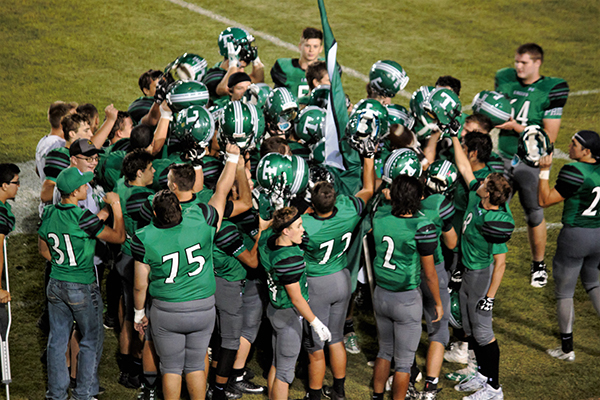 Jon Johnson Photo/Gila Valley Central: The Thatcher Eagles are on their way to the state championship game after outlasting Santa Cruz Valley, 27-26 in overtime.

Thatcher scored first after its opening drive was continued via a muffed punt by Morenci. The Eagles took advantage of the mistake, and quarterback Jake Dunlap hit Dallin Cook for a 36-yard touchdown. The 2-point conversion made it 8-0 Eagles early in the first quarter.

After Thatcher scored again on a 3-yard run by Dunlap late in the second quarter, the Wildcats found themselves down 16-0 with time running out in the half.

Morenci didn’t falter, however, and managed its time wisely to put itself in a position to score. With just 18 seconds left in the half, tight end Esai Venegas made a beautiful over-the-shoulder touchdown catch from quarterback Kyle Swan to put the Wildcats on the board. They would go into halftime trailing 16-6. 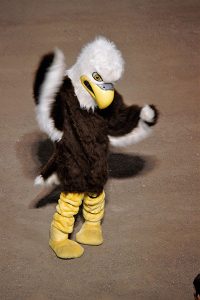 After some early success throwing the ball in the third quarter, Morenci just couldn’t capitalize. A 40-yard punt return by Tyler Roebuck set the Eagles in good position, and, a few plays later, Corbin Brown ran it in from 4 yards out to put the Eagles up 22-6 with about 5 minutes left in the third.

Nate Lee, who had a big night receiving and rushing, then scored from a pitch from Dunlap as he twirled away from the defender at the 4 yard line and somehow managed to stay in bounds.

Morenci still had some fight left, however, and Gavin Chavez scored on a 77-yard reception from Swan on a blown coverage. With Venegas catching the 2-point conversion, Morenci was knocking on the door of Thatcher.

Morenci got a different response then desired, however, as Thatcher answered with a sustaining drive that ended with a 5-yard touchdown by Shane Cooke.

“They came out and played us tough,” coach Sean Hinton said. “I thought we were very fortunate the first half to get a couple touchdowns on them, and we were able to keep the lead.”

Fresh off its controversial victory over Thatcher last week, Snowflake came into Safford looking to prove it was worthy of its unblemished record. The Lobos bent the large Safford defensive line to its will, running for 288 yards on the night.

Safford looked good early on, opening the scoring when quarterback Manuel Aparicio hit Cameron Abril on a 47-yard touchdown pass. The extra point by Riley DeSpain gave Safford an early 7-0 lead. The Bulldogs would then allow 35 straight points to the Lobos.

While Safford was having its troubles against Snowflake’s defense, Lobos running back Zach Solomon was having a huge game running roughshod over the Bulldogs. Solomon, who finished with 201 yards rushing and three touchdowns, got things going for the Lobos in the second quarter with a 25-yard touchdown scamper.

With the game tied 7-7, Safford attempted a fake punt on fourth and one on its own 36 yard line and did not convert. Snowflake immediately capitalized on the turnover, as J.T. Tate caught a 36-yard touchdown pass from Trey Schneider on the very next play. The Lobos would then rattle off 21 more points before the Bulldogs would answer.

A bright spot for Safford on the night was the defensive back play of E.J. Estrada, who finished with two interceptions.

The Bulldogs attempted a comeback in the fourth quarter after being ignited by a stupendous one-handed catch by Abril that set Safford up for its second score on the night. Two plays later, DeSpain punched it in from 3 yards.

Aparicio then scored on a 4-yard plunge with 3:49 left in the game. A couple of late sacks sealed the Bulldogs fate, however, and they look to lick their wounds before heading into sectional play next week against Florence (5-0) which beat Lakeside Blue Ridge (1-4) 56-28.

Another week, another big victory for the Pima Roughriders (5-0). The Bourgade Catholic Golden Eagles (2-2) didn’t have a prayer against the Roughriders, who led 33-0 at the end of the third quarter.

Pima will host the game of the week Friday when sectional rival Thatcher (4-1) comes knocking. However, it appears Pima will be without its starting quarterback, Joshua Whitaker, who was ejected late in the game. The ejection will cause Whitaker to miss the Thatcher game. According to a witness, Whitaker bumped into another player and then tried to help him up, somehow causing the official to deem his action worthy of an ejection in a game that was more than over. After the ejection, Pima continually kneeled the ball on its possessions in an apparent reaction to the officials’ calling of the game even though there were between eight and nine minutes left on the clock, according to the witness.

Whitaker told Gila Valley Central that the play occurred after he punted the ball and was pursuing the kick returner. He said he collided with another player and then simply went to help him back onto his feet.

“I felt like it wasn’t necessary to cause me to be ejected,” Whitaker said. “I’m really hoping film can prove my case, however, I have a great team and a backup quarterback who are going to continue to work hard this week. I’m still pretty shocked and really disappointed.”

That single action, whether being the correct call or not, could significantly impact how the 2A East shapes up. However, it will be next man up in Pima for the Thatcher game at this point.

Pima, Thatcher and St. Johns (4-0) all sit atop the 2A East Section with 1-0 league records. St. Johns, which beat San Carlos (0-4) 61-0, has yet to relinquish a point this year. St. Johns will travel to Morenci (2-2) next week before hosting Thatcher and then Pima in the subsequent weeks.