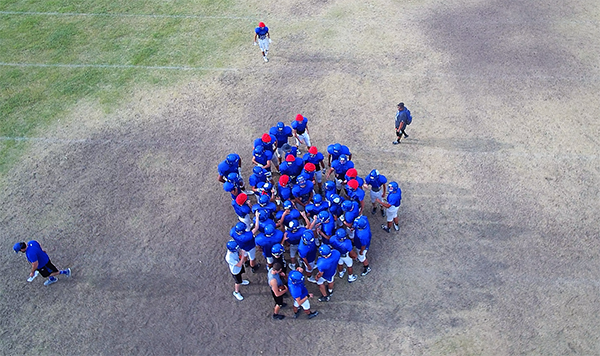 All of the teams opened their season on the road; Safford handled Payson, Thatcher blew away Willcox and Pima took it to Miami.

The Safford Bulldogs (1-0) ran all over the Payson Longhorns (0-1) and its defense held strong with a shutout until late into the fourth quarter.

Quarterback Manuel Aparicio scored the Bulldogs’ two other touchdowns and finished the night passing 6-8 for 28 yards and one interception. He also led the Bulldogs on the ground with 81 yards rushing on 17 carries.

Alba said Aparicio and Harsh complement each other well and that running two quarterbacks with the same scheme keeps the pressure on the defense without one player carrying all the load.

“It’s really nice to have that luxury,” Alba said. “It’s not a burden at all.”

Riley DeSpain was the other big name of the night with 77 yards rushing on 14 carries as well as three made PATs and a field goal.

Safford’s other two points came via a safety in the first quarter.

The Bulldogs travel next Friday as well to be the home opener of the Sahuarita Mustangs (0-0). The Bulldogs look to avenge their last meeting with Sahuarita, which ended in a 49-27 loss in 2014.

The Thatcher Eagles (1-0) scored often and early on its rout of the Willcox Cowboys (0-1), which couldn’t find the end zone all night.

Thatcher spread the scoring around as at least seven different Eagles registered a touchdown.

Quarterback Jake Dunlap led the way with two touchdown passes to Tyler Roebuck and a rushing touchdown of his own.

“(The) kids played hard,” Thatcher coach Sean Hinton said. “Everyone got in and everyone did good.”

Thatcher hosts the Benson Bobcats (0-0) next Friday at Eastern Arizona College’s John T. Mickelson Field. Thatcher was victorious in its last meeting against Benson in 2014, winning by the score of 49-8.

The Pima Roughriders (1-0) handed the Miami Vandals (0-1) a loss in its home opener, as Pima’s foray back into the 11-man football game started on a positive note.