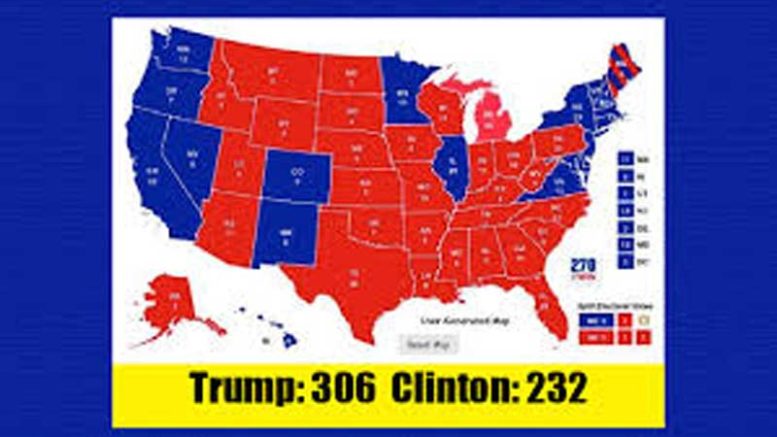 During her current “What Happened” book signing and media tour, 2016 Democratic presidential contender Hillary Clinton has tendered a basket of excuses why she lost the election. Several news commentators and opinion journalists have estimated she has, so far, offered over 30 reasons why the public foolishly failed to send her to the White House.
One of her latest conclusions being the arcane and inappropriate authority of the Electoral College. At least in her mind, the institution is arcane and inappropriate. The fact it’s been an important part of our presidential election process for more than 200 years seems inconsequential.

Funny, I don’t remember her whining when her husband was elected president, or when Barack Obama took over from George W. Bush. So, nearly a year after the election, why is she still complaining?

Because she didn’t win after nearly everyone, including her, thought she would. And maybe her ego won’t let the national embarrassment fade away either.

Unlike previous presidential candidates who didn’t advance to 1600 Pennsylvania Avenue – instead, moving on with her life – Hillary has had an extremely difficult time accepting the vote tally of the Electoral College.

For eleven months she has concocted practically every conceivable explanation of why she “was robbed” of the presidency. Now, she’s reduced to hammering the very institution that safeguards the integrity of presidential elections.

During an interview with CNN’s Anderson Cooper on Sept. 13, she unabashedly voiced her objections to the continued presence of the Electoral College and why she believes it should be abolished.

“I think it needs to be eliminated.  I’d like to see us move beyond it, yes” she said. “I believe strongly that in a democracy we should respect the will of the people, and to me, that means it’s time to do away with the Electoral College and move to the popular election of our president.”

In other words, she endorses the concept that a presidential candidate could be elected by the simple majority of voters residing in the more populous states or large urban centers. Big states like California, New York, Florida, Texas, Illinois and a few others could easily dominate an election by overwhelming the smaller states; Utah, North Dakota, New Hampshire, Mississippi, Arizona, et cetera.

Contrary to Hillary’s assertion that the Electoral College is broken and needs to be tossed, the 2016 election was an excellent example for the continued need of it. If it wasn’t for the individual states having a vote in the EC equal to their congressional representation – the number of U.S. representatives plus two U.S. senators – then a presidential election could be decided by the popular vote of about a dozen of the more populous states.

Without the EC, campaigns would be limited to the largest states, basically leaving the smaller ones out of the process. Presidential candidates would focus their time and money in big city voting districts because that’s where larger concentrations of people live.

The graphic below illustrates how the largest metropolitan districts/counties (blue) contain as much of the U.S. population as the rest of the country combined (gray). You may have noticed there are a few states that don’t contain a single blue area and several others that only have one or two small blue zones. Most of the solid blue areas are situated along the Atlantic and Pacific coasts, with a sprinkling of blue districts in between. These areas are commonly referred to as the “flyover states” because politicians tend to spend less time campaigning in them while devoting substantial effort and advertising dollars in the more populous blue states. 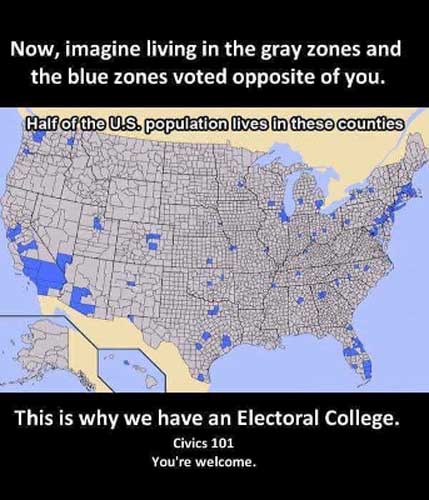 To his credit, President Trump recognized this reality and dedicated a considerable amount of time and money stumping in rural areas of the country. Hillary, not so much. Actually, there were states she never set foot in.

Another way to look at the Electoral College is that it functions as a check on unchecked majority rule. Similar to the three branches of government – executive, legislative, judicial – being a “check and balance” against each other acquiring too much authority, the EC serves a comparable role in presidential elections. The Founders were well aware of the dangers of a pure democracy, knowing safeguards had to be in place to protect the minority from the mischievous tendencies of an over-reaching majority.

The infrequency of the EC overturning the popular vote isn’t a very convincing argument to trash the system. Plus, all kinds of constitutional issues would arise. Even Hillary admits altering the constitution is not an easy thing to do.

Perhaps the real reason the EC has become objectionable to certain politicians and professional bureaucrats is that it presents a safety barrier against the whims and aspirations of a governmental aristocracy – both Democrat and Republican.