Contributed Photo/Courtesy iTalk106.7: Snowflake eked out a win in a defensive battle with Safford on Friday, 13-10.

SNOWFLAKE – It’s a long trip up to Snowflake to play a high school football game; it’s an even longer ride back after just coming up short.

Safford quarterback Manuel Aparicio bounced back from a subpar, injury-plagued game against Pusch Ridge Christian Academy and had a big game running the ball for more than 150 yards on the night. Aparicio also hit some big passes to his favorite target, Cameron Abril.

After an Abril field goal opened the scoring, Scrivner broke a long touchdown run giving the Bulldogs a 10-0 lead with 2:23 left in the first quarter.

Snowflake answered right back, however, as Traegon Standerfer hit Taden Flake over the middle to bring the score to 10-7 after one quarter of play. Flake finished the night with three catches for 91 yards receiving. 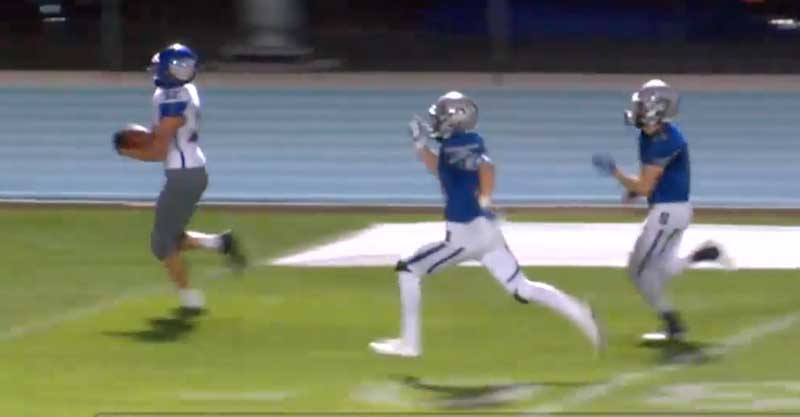 Contributed Photo/Courtesy iTalk 106.7: Keaton John races around the right side for an apparent go-ahead touchdown that was unfortunately called back for holding.

The Lobos then took the lead on their next possession as Standerfer hit Tyler Brimhall, who then took it 71 yards to the house. The extra-point was blocked, however, and the Lobos had just a field goal’s lead at 13-10.

With time running out in the second quarter, Aparicio hit a triple-teamed Abril down the right sideline, but Abril just got taken down at the 6 yard line and time ran out on the Bulldogs in the first half.

The second half was a defensive struggle as the Bulldogs began to pressure Standerfer and sack the Lobos’ quarterback twice on the opening drive.

The ensuing punt was partially blocked, but Safford’s Nate Wilms couldn’t then handle the awkward flight of the ball and muffed it, with the Lobos then recovered for the awkward first down.

The Lobos then moved the ball into the red zone but a bad snap on second and 6 lost 6 yards and then turned the ball over on downs on fourth and 14.

On Safford’s first possession of the third quarter, Keaton John raced around the right sideline for an apparent 73-yard TD as John outraced everybody on the field. Unfortunately, Taylor Hornelaz got caught with his hand in the cookie jar holding a Snowflake player to spring John and the play was called back and Safford ended up having to punt on fourth and 5.

At the beginning of the fourth quarter, Safford was again on the move as Dylan Dorrell peeled off a big run over the left side and was just tripped up at the 33-yard line after a 25-yard run. The drive ended near the red zone, however, as Aparicio’s pass just bounced out of Hornelaz’s hands at the 25-yard line on fourth and 9. The Lobos then took over with 8:12 left in the game.

The Bulldogs’ defense barked back again, however, and Ezra Boughner added to his big 3.5-sack defensive game by blocking the Lobos’ punt, giving Safford great field position at Snowflake’s 33-yard line late in the fourth quarter.

On fourth and 6 from about the 28-yard line, John gathered about 5.5 yards around the right side and Safford turned the ball over on downs with 3:49 left in the game.

Snowflake then made its biggest play of the second half as Standerfer connected with David Brimhall along the left sideline to convert on third and 18 with 3 minutes to play.

Safford will travel to face the Florence Gophers (3-0 conference, 4-0 overall) next week. The Gophers dispatched the Blue Ridge Yellowjackets (1-3 conference, 2-3 overall) on Friday, 41-16.