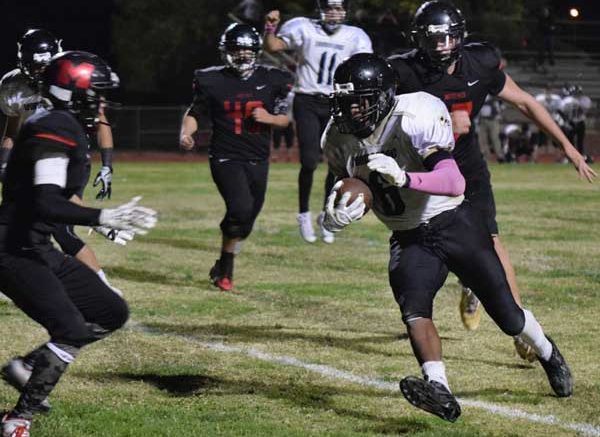 It wasn’t ABC’s Wide World of Sports spanning the globe to bring you the thrill of victory and the agony of defeat, but, for the price of admission, both emotions were clearly visible following an overtime game at Lawson Stadium in Morenci on Oct. 14.

The Morenci Wildcats edged the Yellow Jackets from the ‘town too tough to die’, Tombstone, 27-26 in Morenci’s final regular season home game. 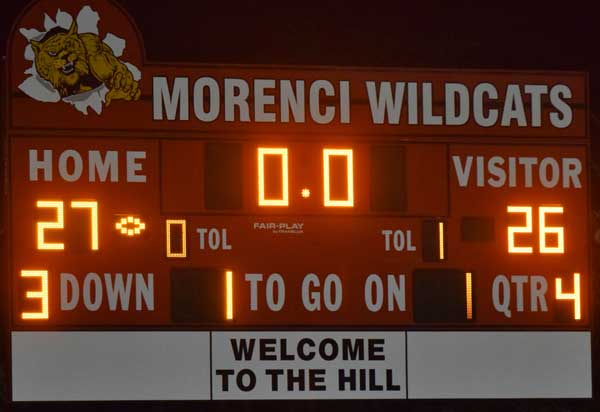 The Wildcats opened the scoring in overtime after senior Isaiah Aguinaga appeared to be stopped on a fourth and 6 screen pass. Aguinaga saw an opening, however, broke a tackle and scooted to the outside for a touchdown. Sophomore Chris Roybal gave Morenci a 7-point advantage with his conversion kick. En route to pay dirt, the Wildcats fumbled and recovered on first down, gained four yards on second down, and threw an incomplete pass on third down.

Tombstone answered after senior Larry White bulled his way across the goal line on 3rd and-1 for a TD. The Yellow Jackets opted to go for the win on the conversion, with senior Ralph Waters running it to the left side. The running back was met at the 4 yard line by Morenci defensive back Gavin Chavez, who delivered a crushing blow and preserved the victory for the Wildcats by stopping Waters short of the goal line.

“I knew it was going to come to me,” Chavez said. “I pushed off my man and gave him (Waters) the biggest hit of my life.”

“It was a humungous play,” third-year Morenci head coach Gary Sandoval said. “They (the Wildcats) showed me perseverance, they did not give up.”

Waters got up, took off his helmet and went back down in agony where he had been denied going into the end zone.

The Wildcats expressed their emotions by jumping up and down, embracing and high-fiving one another as they made their way to midfield for the post-game handshake.

Shortly afterward, Sandoval wore an ear-to-ear smile as he approached the Wildcats, who had huddled in the end zone shortly after the exchange of good sportsmanship. It was because all of the time he and his coaching staff put toward preparation for the game paid off in the overtime period.

“Little things in life end up meaning the most,” he said. “We need to do things on a consistent basis, let the training take over, improve.”

The score was deadlocked 20-20 after regulation play and 14-14 at halftime. Morenci led 6-0 following the opening period.

The Wildcats had nine offensive possessions, five in the first half, verses Tombstone’s ten, five in each half, during the 48 minutes of regulation.

The Wildcats second-period score, their fourth possession, capped a 17-yard, three-play drive in 1:57. Senior Kyle Swan covered 3 yards and also the conversion run. Morenci led 14-6 with 2:11 left in the half.

The Yellow Jackets covered 52 yards in eight plays plus two penalties for a 35-yard TD and conversion kick with 8:02 left in the second period. A Montoya aerial to senior Wayne Wilridge plus the first of two Schaub conversion kicks gave the visitors their only lead of the game. Tombstone led for nearly six minutes.

The visitors’ other goal line crossing covered 84 yards in eight plays using 1:29. The score was tied 14-14 with 42 seconds left in the first half.

Tombstone was a yard short of the goal line, getting stopped three times needing the same distance after covering 91 yards and using 7:39 on its initial possession. The third possession went three-and-out on 4th-and-19, and the fifth also went three plays but gained 27 yards before the half ended.

Tombstone capped a 6-play, 63-yard drive on a Montoya to Schaub 19-yard pass. Morenci sophomore Mark Roybal intercepted the conversion pass attempt as Chavez and senior Frankie Gonzalez zeroed in on Montoya. The score was tied 20-20 with 1:36 left to play.

“They make that extra point and we lose the game,” Sandoval said. 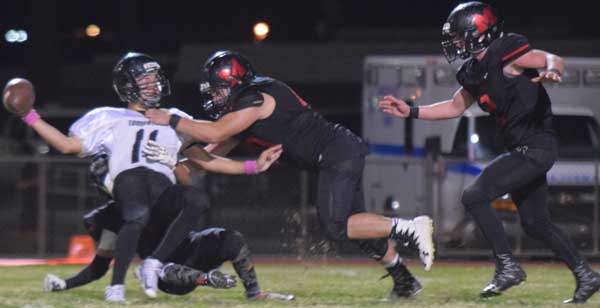 Photo By Raymundo Frasquillo: Gavin Chavez, on the ground, and Frankie Gonzalez (20) bring down Tombstone quarterback David Montoya (11) during a 2-point conversion attempt with 1:36 left in regulation and the score tied, 20-20.

Morenci scored the first time it got the ball in the second half, its sixth possession of the game. The Wildcats used 5:53 to cover 69 yards in 11 plays plus a penalty. Swan stepped into the end zone from a yard out. Johnson blocked the extra point kick.  The advantage was six points, 20-14.

The Wildcats next three possessions were each scoreless. A 74-yard drive used 5:55 with eight plays before a punt on fourth and 20 resulted; an 84-yard drive went three-and-out after netting 2 yards and a 60-yard drive got 45 yards before an interception.

Eighteen student-athletes were on hand for a learning session, watching the game review the following morning. There are 35 listed on the game program roster. 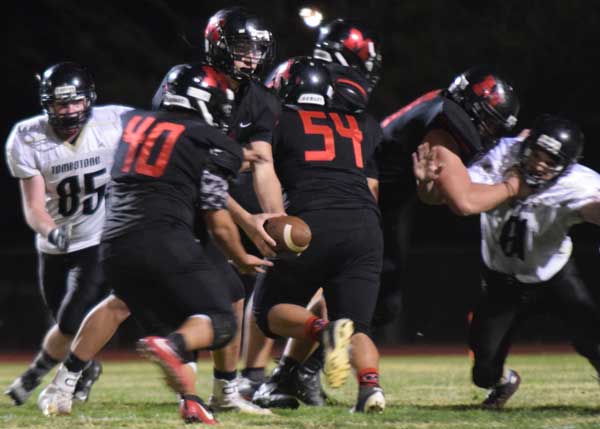 Photo By Raymundo Frasquillo: Isaiah Aguinaga (40) moves up to get a handoff from quarterback Kyle Swan during Morenci’s home win over Tombstone. Aguinaga scored the Wildcats’ touchdown in overtime en route to a 27-26 victory.