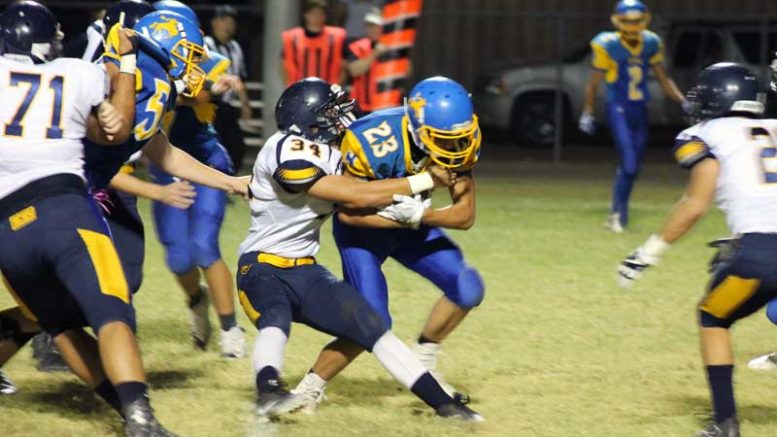 Photo By L. Scott Bennett: Aaron Judd (23) and the Pima Roughriders ran all over the Bourgade Catholic Golden Eagles and celebrated a homecoming win, 58-13.

PIMA – It was homecoming Friday night at Edd Hubbard Field, and the classes of 1987, 1997 and 2007 were treated to a true homecoming celebration as their Roughriders crushed the Bourgade Catholic Golden Eagles, 58-13. 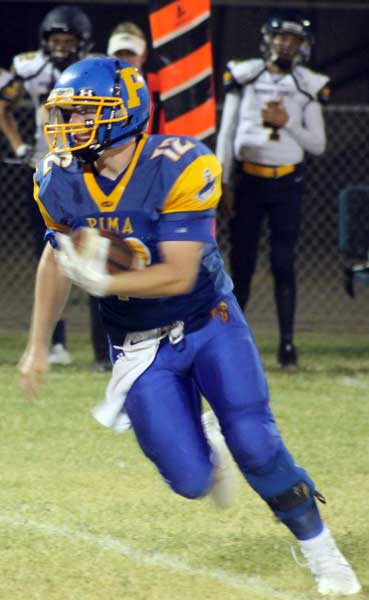 Friday’s festivities started with true flair as the game ball was delivered by the 2016 homecoming royalty via a helicopter which landed on the freshly painted Pima “P” on the 50-yard line. Once the game started, Pima scored on its first possession when senior running back Emilio Molinar took the ball in on the ground. Less than three minutes into the game the Roughriders were rolling, and at 6-0 it would be as close as the Golden Eagles would be all night to the mighty Roughriders.

While Pima is enjoying a successful season, the Roughriders have struggled to keep the offense and defense firing on all cylinders for the entire game. This problem was rectified Friday as senior linebacker Frank Gutierrez grabbed what would be the first of three Pima picks. With the ball and a short field, Pima quickly punched it in for another six when senior quarterback Josh Whitaker tossed it to senior tight end Dillon Jones for the score.

It was a rough night for the Golden Eagles offensively as their QB was pressured all night by the Roughrider defense. With pressure from the Pima defensive line, the Golden Eagles QB was forced out of the pocket and to throw into tight coverage. Junior defensive back Jacob Whitaker stepped in front of the ball, picking it off and then taking it to the house to complete the pick six. After a successful 2-point try, the Roughriders were up 20-0 as the first quarter expired. 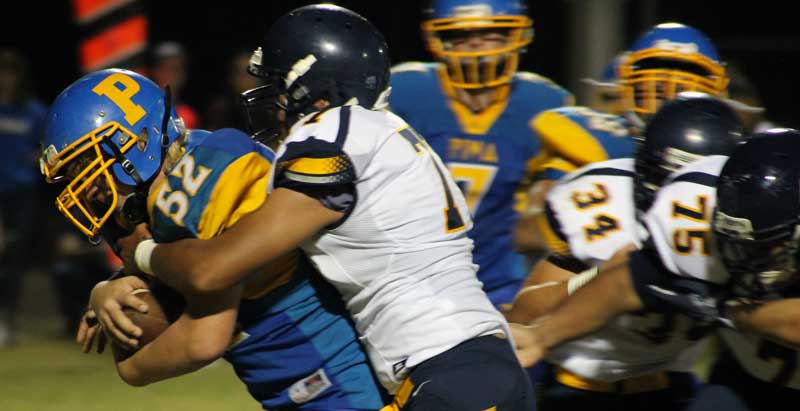 Photo By L. Scott Bennett: Trevor Pruszynski attempts to escape the grasp of a
Bourgade player.

It did not get any better for Bourgade Catholic as on its next possession Pima’s senior middle linebacker Ryne Lewis got in on the Pima pick parade, stealing another one for the Roughriders on an errant Golden Eagle toss. Again with a short field, Pima hit pay dirt when Jacob Whitaker got his second TD of the night after a 7-yard run. 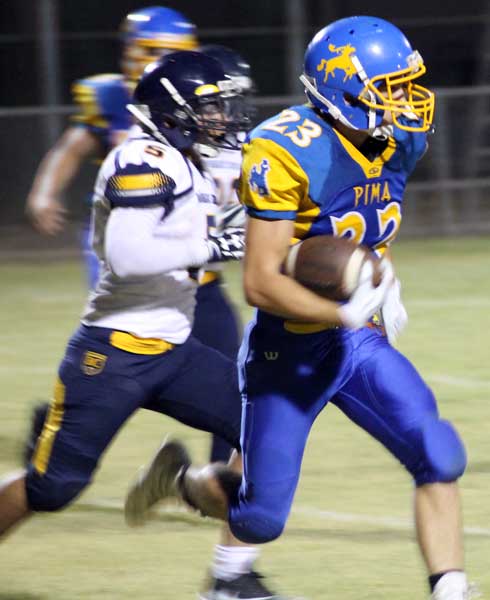 Photo By L. Scott Bennett: Aaron Judd takes off to the races.

Senior wide receiver Bradyen Brown caught a Whitaker pass for another score with 4 minutes left in the half. After a successful 2-point try when Molinar powered it in, the Roughriders had this game in hand, however, Pima was not done scoring in the half. The Roughriders would get one more before the intermission when Josh Whitaker hit senior Aaron Judd for a 50-yard TD pass with about 1 minute to play before the break. With the touchdown, the Roughriders finished the half with a 42-0 lead.

The Golden Eagles tried to keep things interesting in the second half, but two touchdowns were not enough to get Bourgade Catholic back in the game. With each trip to the end zone for the Golden Eagles, Pima would answer back with touchdowns of their own. Josh Whitaker hit senior wide recover Justin Alder for six on Pima’s first possession after the first Golden Eagles TD. Then, after the second Bourgade Catholic TD, Pima’s Molinar took the ensuing kickoff to the house to close out the scoring for the night. When the dust settled and victory fireworks were set off, Pima had won their homecoming game, 58-13.

After the game, Pima’s Aaron Judd was ecstatic about the team’s complete victory. Playing both offense and defense, Judd, who was also voted as Pima’s Homecoming King, explained that his teammates worked extremely hard to play lockdown defense and play a complete game.

Senior QB Josh Whitaker was also complimentary of his team and gave credit to the Golden Eagles for how hard they played. “They are a good team who played really hard, but we were ready for them and kept to our plan.”

“They are a good team who played really hard, but we were ready for them and kept to our plan,” he said.

Head coach Jace Hancock was also proud of his team and explained that he was glad that they stayed focused and worked really hard all week.

Next week, the 2-2 Bourgade Catholic Golden Eagles will travel to Tempe Prep to take on the 2-2 Knights. The 4-1 Roughriders will travel down the street to EAC to take on undefeated rival Thatcher for what is sure to be one of the most exciting games of the season. With both playoff implications and, perhaps more importantly, bragging rights at stake, it is guaranteed that both Thatcher and Pima will come ready to play.