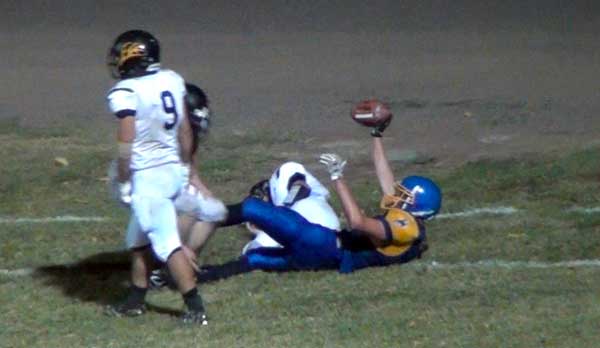 Jon Johnson Photo/Gila Valley Central: Pima's Jarrett Kartchner catches the go-ahead touchdown with under a minute to play. However, Round Valley came back to beat Pima, 31-28.

PIMA – The Pima Roughriders (7-2 overall, 3-2 2A East) were 12 seconds away from sending the Eager Round Valley Elks (9-0 overall, 5-0 2A East) packing Friday with their first loss of the season. Triumph turned into heartbreak, however, as the Elks’ Kyron Woolf drilled a laser to Marshall Donaldson, and unbeaten Round Valley preserved its perfect record and top perch on top of the 2A East with a 31-28 win over Pima.

“We played our game and came up short,” Pima head coach Jace Hancock said. “(There’s) nothing to be ashamed of.”

Donaldson was a foil to Pima all night long intercepting Roughrider quarterback Joshua Whitaker four times (once for a pick 6) and catching two touchdowns of his own on offense. 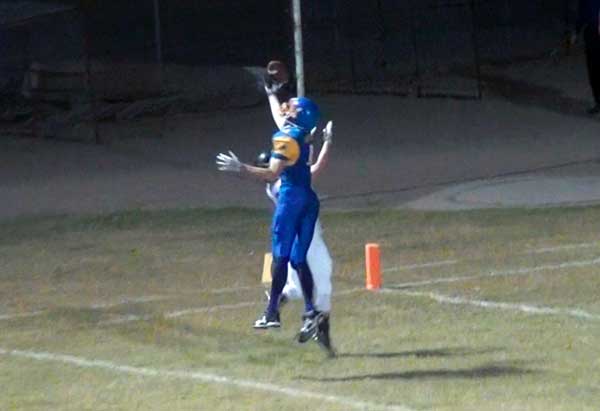 After a defensive first quarter, Donaldson broke the scoring drought on a defensive play early in the second quarter when he read Whitaker’s eyes, left his receiver and stepped in front of a pass intended for a different Pima receiver. He then went untouched 33 yards for the score.

Pima got on the board in the second quarter too, behind the running of Manuel Rivera.

After catching a screen pass from Whitaker, Rivera followed his blocking and ran down the right side for 40 yards to the 10 yard line. A couple of plays later, Rivera finished the drive with a 3-yard dive into the end zone. The extra point bounced off the goal post, however, and Pima was still down, 7-6. 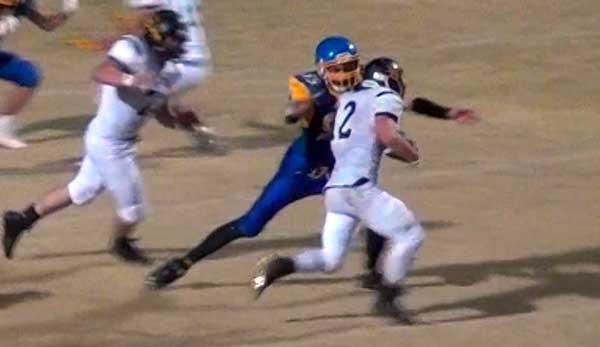 The Elks then drove the ball into the red zone but appeared to be stopped as they faced a fourth down and 11 from the 19. Instead of attempting a field goal, the Elks went for it, and Woolf threw a lob pass up for grabs that Donaldson adjusted to and snatched out of the air in front of Thompson for his second score on the night. The extra point was good, and the Elks went into halftime with just a 14-6 lead, despite winning the turnover battle to that point, 4-1.

“I really thought we had a shot at the game, even at halftime,” Hancock said.

The Roughriders came out from the break on a mission and drove the ball down the field by throwing and running. After a nice run by Rivera, the Elks’ Braden Brown was flagged for unnecessary roughness on a play that sidelined Rivera for the rest of the quarter. 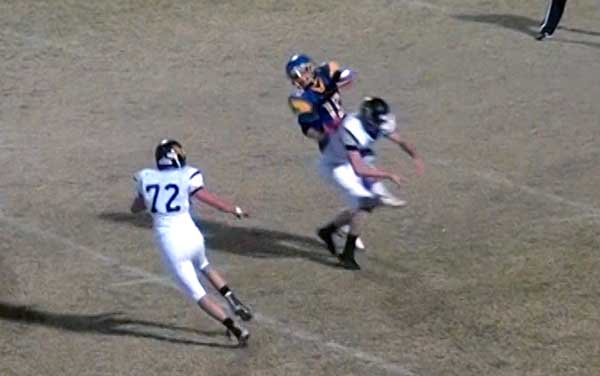 The penalty helped put Pima in scoring position and the combination of Whitaker and twins Jarrett and Justin Kartchner did the rest. First, Whitaker hit Jarrett in double coverage in the back of the end zone for an 11-yard touchdown and then found Justin in the left flat for the 2-point conversion. The score tied the game, 14-14.

After a couple of big plays, however, the Elks were back in scoring position when deja vu hit.

Facing a fourth down and 13 from the Pima 19 yard line, Woolf hit Braidan Eisenlord for the touchdown to go up 21-14.

On their next possession, the Roughriders faced their own fourth down with 6 yards to go at their own 46 yard line. While lined up to punt, the snap went to the running back Emilio Molinar, who somehow got rid of the ball before being slammed into by two Elks players. The ball sailed through the air, was tipped by a defender and found its way nestled into the awaiting sure hands of Pima’s Brayden Brown, who then raced into the end zone for a 54-yard touchdown.

Whitaker threaded a 2-point conversion pass to Justin Kartchner in quadruple coverage over the middle, and Pima had its first lead of the night, 22-21.

After a big pass play to Bingham that gave the Elks the ball at the Roughriders’ 33 yard line, the Elks looked to be in good position to score again. However, Pima’s defense, which had stifled the run most of the night, rose up again and forced a fourth down. This time, however, Round Valley opted to try a 25-yard field goal and took back the lead, 24-22, when Camanez’s kick split the uprights with just a little more than eight minutes left in the game.

Jon Johnson Photo/Gila Valley Central: This field goal ended up being the difference in the game.

On the following Pima possession, the contest appeared over after Donaldson made an outstanding play for his fourth interception of the night.

Pima’s defense rose to the occasion once again, however, and Justin Kartchner forced and recovered a fumble as Round Valley attempted to run out the clock. 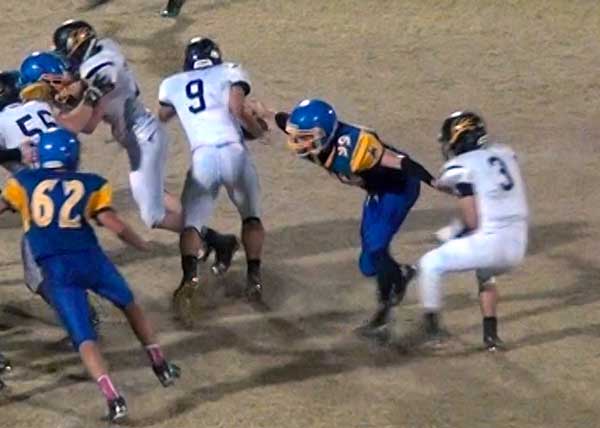 Whitaker then went to Justin Kartchner on third and 17 with a gorgeous over-the-shoulder toss that netted 18 yards and a first down.

With less than a minute to play, Whitaker faked a handoff and hit Jarrett Kartchner in the back of the end zone in triple coverage with what many thought would be the game-winning touchdown. The 2-point conversion was denied, and Pima was up 28-24 with 52 seconds on the clock. 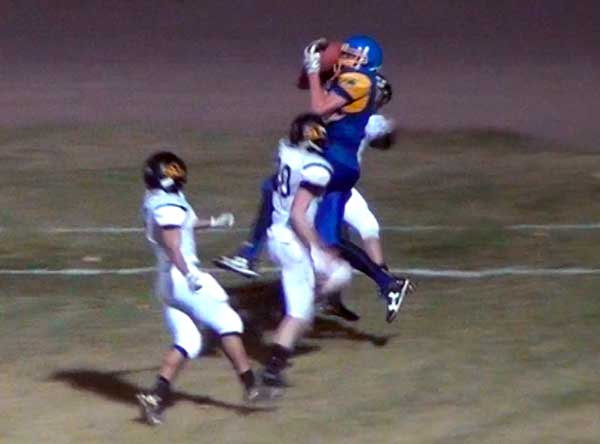 After a squib kick, the Elks stunned the home crowd as Woolf hit a wide open Bingham for a 42-yard gain to put them in scoring position.

With just 12 seconds left on the clock, Woolf then went to the Roughrider buster of the night, Donaldson, who beat Thompson one final time and caught a laser pass for the victory, 31-28.

“In a game like this – knowing that we can play with the best – we’re right there, so it will be OK,” Hancock said. “We’ll make some noise.”

In other action around the Gila Valley, Safford (5-4 overall, 3-1 3A Central) easily dispatched Globe (4-5 overall, 0-4 3A Central) 48-6. Safford quarterback Manuel Aparicio scored three touchdowns on three rushing attempts and added a passing touchdown to lead the Bulldogs to victory.

Safford will next face perhaps its toughest test of the season as it hosts Queen Creek American Leadership Academy (8-1 overall, 4-0 3A Central) on Friday.

Thatcher will next face Miami at home Friday for its last regular season game before the playoffs. Thatcher is ranked second in the 2A Division, following Round Valley.