Jon Johnson Photo/Gila Valley Central: Thatcher's Tyler Roebuck winds up to hit Quinton Turley on a 2-point conversion. The Eagles dispatched the Morenci Wildcats, 36-6, to lay sole claim to first place in the 2A East Region.

MORENCI – The Thatcher Eagles (3-0 conference, 5-0 overall) ascended the hill in Morenci and afterward stood alone atop the 2A East Region rankings, dispatching the Wildcats, 36-6.

Morenci (3-1 conference, 3-1 overall) could not stop the mean, green offensive machine as Thatcher scored on each of its first five possessions and just missed out on a touchdown on its sixth.

“Hats off to Thatcher,” said Morenci head coach David Gallegos. “They’re not the defending state champions for nothing. They run the ball and they’ve been doing these things for years and they do it right.”

Jon Johnson Photo/Gila Valley Central: Thatcher’s Riley Morris runs away from Tito Casillas on his way to a 65-yard touchdown.

With its ball-control game plan, even as Thatcher ran its up-tempo, no-huddle offense, it still manages to own the time of possession throughout most of the game, limiting its opponent’s chances at coming back after falling behind.

Thatcher made it look easy on offense as it methodically moved the ball down the field. It opened up the scoring with a 15-yard run by quarterback Tyler Roebuck, followed by a 23-yard jaunt by the elusive Quinton Turley, both in the first quarter. Roebuck was named Gila Valley Central’s Player of the Game but insisted his team still had room to improve.

“We just have to keep working hard (and) do our thing,” Roebuck said. “We have a lot of mistakes that we still need to fix.”

Jon Johnson Photo/Gila Valley Central: Thatcher’s Tyler Roebuck opens the scoring with a 15-yard run in the first quarter after escaping being sacked.

The onslaught continued in the second quarter as Trevin Clark ran in a TD from 11 yards out followed by successful 2-point conversion by Roebuck. Riley Morris then had the longest run of the night, taking a pitch from Roebuck along the right sidelines 65 yards to paydirt. Roebuck then hit Turley wide open in the back of the end zone for the 2-point conversion and the rout was on, 28-0.

After punting on their first possession, the Wildcats had success moving the ball against the Eagles on its next two drives in the first half only to have them both end just outside of the red zone with lost fumbles. The Wildcats would punt twice and turn the ball over three times on the night compared to just a lone Thatcher turnover at the end of the game. 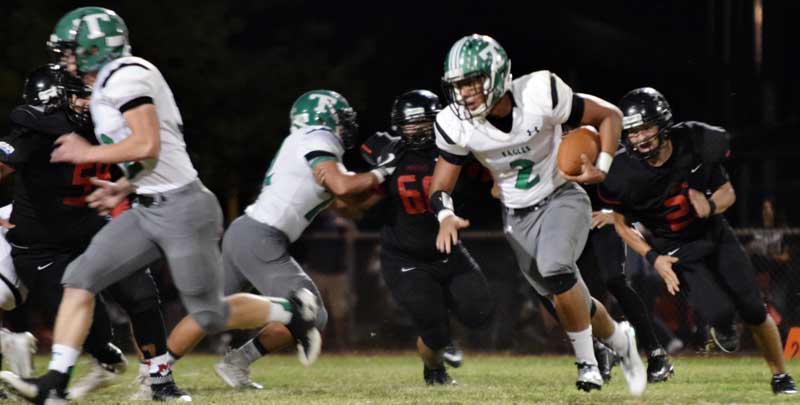 Photo By Raymundo Frasquillo: Tyler Roebuck makes his way around the left end.

The resilient Wildcats never gave up, however, and produced one of the most exciting moments of the game as the half loomed.

With time running out and all their timeouts spent, Wildcats’ quarterback Mark Roybal clocked the ball to set up a possible last play. The give was to running back Steven Chavarria, who was stuffed at the 3-yard line. The few remaining seconds continued to tick down as the refs hurried to set the ball, and Roybal just got the snap off before the horn sounded.

As players from both teams stood not sure if the play was actually ongoing or if it was already halftime, Roybal did a Dan Marino impersonation and faked spiking the ball (which would have been ill to do since it was fourth down and the halftime horn had already sounded) and then proceeded to run around the right side for the Wildcats’ only score of the game.

Jon Johnson Photo/Gila Valley Central: Morenci quarterback Mark Roybal scores at the end of the first half for the Wildcats’ only points on the night.

Morenci did make the ensuing extra-point attempt, however, the referee called the play dead due to offsides on Thatcher and the ensuing re-kick bounced off the crossbar no good.

Morenci used their end of the first-half momentum to propel them at the beginning of the third quarter all the way into the red zone. The Thatcher defense stepped up, however, and kept the Wildcats from scoring and forcing a turnover on downs with a sack of Roybal.

From there the green machine did its thing and again methodically moved the ball down the field, resulting in a 14-yard TD by Roebuck, who spun out of a tackle from one Wildcat and ran over two more on his way to the end zone. With both teams using a ball-control run offense, each only had one possession in the third quarter.

A 2-point conversion by Quinton Turley ended the scoring on the night, 36-6.

Gallegos said he went over the game briefly with his team afterward and encouraged them to learn from the mistakes of this game and apply that knowledge to their next opportunities.

“I let them know one loss does not define us,” Gallegos said. “It’s what we do after this loss that’s going to define who we are as a team (and) as a brotherhood.” 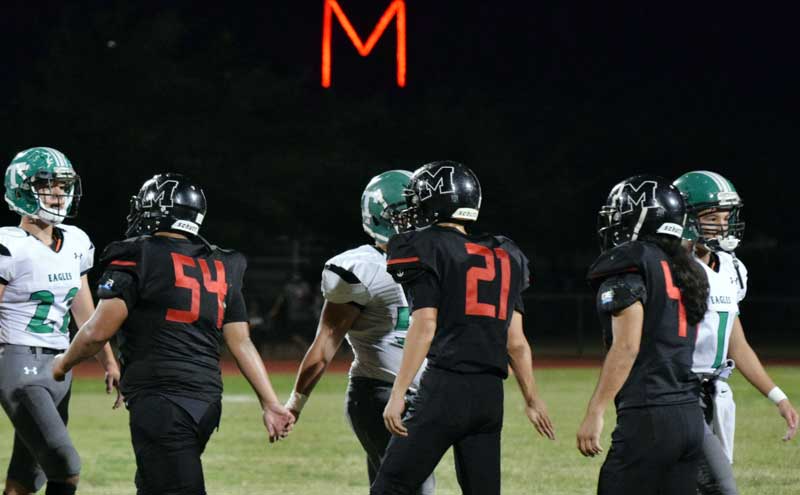 The Eagles will host the Pima Roughriders (4-1 conference, 4-1 overall) next week. The Roughriders stampeded over the Bourgade Catholic Golden Eagles (2-2 conference, 2-2 overall) on Friday, 58-15. (See our full game story on the Pima victory.)