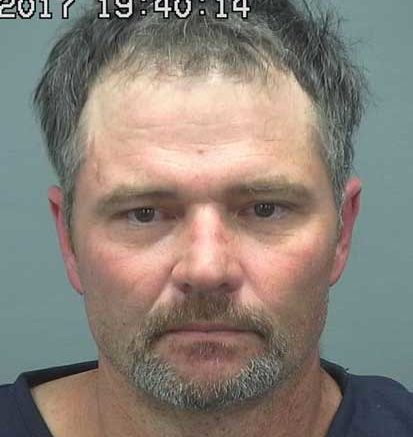 Contributed Photo/Courtesy GCSO: Braden Curtis has been charged with kidnapping and armed robbery.

PIMA – Braden Jay Curtis, 42, has been charged with kidnapping and other felonies regarding an alleged armed robbery that took place Oct. 19 over an apparent drug debt.

On Dec. 14, charges of armed robbery, kidnapping, threatening or intimidating, possession of a weapon by a prohibited possessor and possession of a dangerous drug (methamphetamine) were filed against Curtis in Pima Justice Court.

Curtis had been picked up at his residence in Pima on Dec. 12, after avoiding an attempt to locate for about two months. Upon his arrest, a small baggie with what was later tested to be methamphetamine was located in Curtis’ pocket, according to a Pima Police report. Curtis was then booked into the Graham County Adult Detention Center.

In the original incident, the victim told police that Curtis pulled up in a white Chevrolet pickup truck at a residence on 500 South while the victim was working on his own truck at a friend’s house. He said Curtis exited the Chevy and pointed a semi-automatic handgun at him and demanded, “Where’s my money (expletive deleted)? Where’s my $30?”

After the initial contact, the victim said he hid behind a tree as Curtis unplugged a power inverter the victim was using on his truck and then took the victim’s jump start box and a 20-volt cordless drill.

The victim said he called out to Curtis as he took his belongings and said Curtis pointed the gun at him again and said, “I will shoot your (expletive deleted).” Curtis then allegedly left the scene.

The victim called the police after Curtis left the property and informed them of what happened. The officer on duty then went to Curtis’ residence but was unable to find him. An attempt to locate was then broadcast for Curtis.

Curtis recently had charges of DUI-drug, DUI, possession of marijuana and possession of drug paraphernalia dismissed three days before the alleged robbery in October due to a successful suppression motion filed by his attorney. Those charges also stemmed from an incident in Pima.