SAFFORD – While the occupants of a residence in the Sunrise Village Mobile Home & RV Park at 900 E. Hollywood Road didn’t want anything to do with Robert Anthony Maldonado, 46, the police certainly did.

Authorities had been looking for Maldonado for a month regarding kidnapping and assault charges against him. He also had a warrant on a petition to revoke his probation stemming from a possession of a dangerous drug charge he plead guilty to in 2016. The petition was filed after probation learned of the kidnapping accusation. On Sunday, Maldonado was taken into custody after initially attempting to make the officer believe he was someone else.

According to reports from the Graham County Sheriff’s Office, in May, a woman suffered days of confinement, including being beaten and tied up with duct tape, all at the hands of someone who once promised to love and cherish her, her husband.

After fleeing from her prison May 16, the victim was taken to the Mt. Graham Regional Medical Center for treatment of her injuries. At the hospital, deputies observed the victim had multiple injuries to her face, including two swollen eyes and scratches, as well as injuries to her hands and her back. 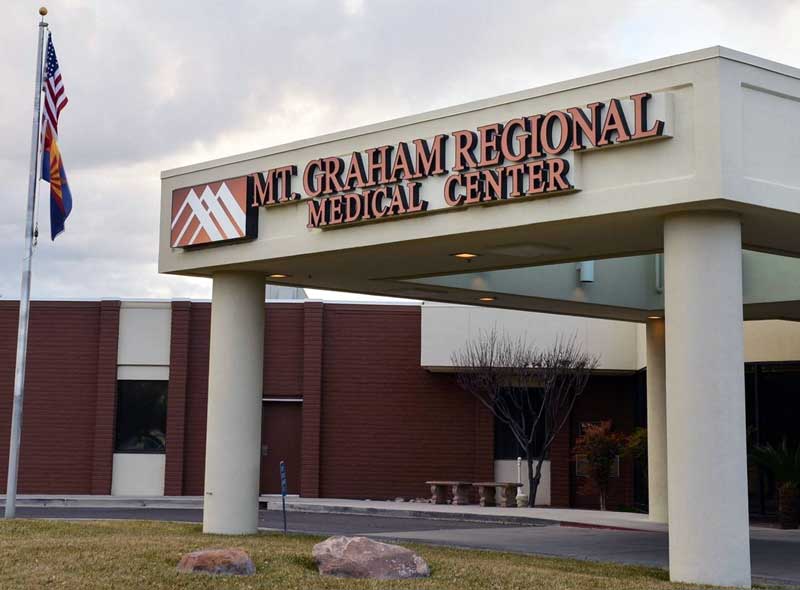 The victim was taken to the Mount Graham Regional Medical Center for treatment of her injuries.

She told a deputy that she had been at the Mt. Graham Safe House and was informed that Maldonado had been released from jail and was looking for her. She then met up with Maldonado and voluntarily went with him to a vacant residence on the 5000 block of Center Street in Solomon owned by Maldonado’s mother and step-father. The owners later said Maldonado was not allowed to use the residence but it was unsecured. Deputies later searched the residence and located several pieces of evidence, including duct tape in various states of use.

The victim said after two days at the residence she tried to leave but Maldonado wouldn’t let her and threw her down and took her cell phone. She was in the middle of texting her friend for help when Maldonado took the phone. He later allegedly texted the friend pretending to be the victim and said she meant help with some food.

A couple of uneasy days followed before the victim once again tried to leave. This time, after the victim jumped a fence, Maldonado allegedly grabbed her and assaulted her. He then brought her back into the house and duct taped her hands together, placed a piece of duct tape over her mouth and repeatedly struck her in her face, according to the witness’ account. She then stayed like that the rest of the day until Maldonado untied her, warning he would tie her up again if she tried to escape.

The following day, after noticing Maldonado was not at the residence, the victim fled and walked to the Safford Ranch Mobile Home Park at 3201 E. U.S. Highway 70, where she located an acquaintance and was taken to the hospital.

On Sunday, an officer confronted Maldonado at the entrance of the Sunrise Village Mobile Home & RV Park and handcuffed him.

According to the Safford Police report, Maldonado said his name was Anthony Fuentes and that he had no idea why the officer was arresting him.

Maldonado was then shown booking photos of himself and other pictures documenting his tattoos and face markings the police had on file and was booked into jail on his warrant.

The Graham County Attorney’s Office previously filed charges against Maldonado regarding the incident, including kidnapping, aggravated assault and theft. Maldonado is being held on a $20,000 cash or paper bond and has a preliminary hearing scheduled for June 28 at 2 p.m. He is also facing a petition to revoke his probation and has been appointed Dennis McCarthy as his attorney.