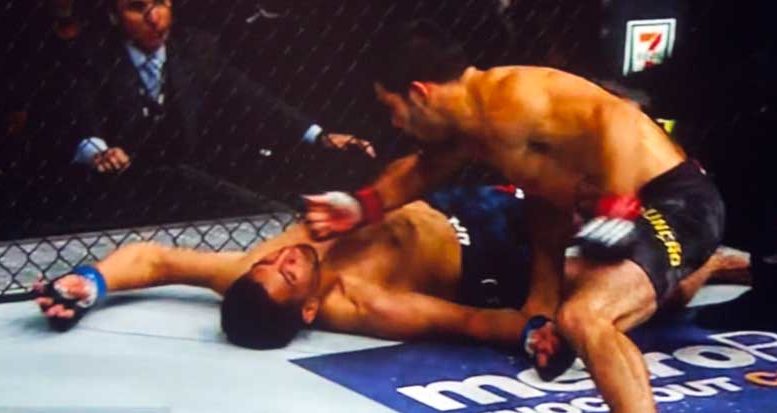 Safford native Matthew Lopez came up short in his fourth UFC fight and was knocked out in the third round after a competitive match.

Lopez took a strong right to the side of his head 1:50 in the third round and was out before he hit the floor. Assuncao then went in for a finishing blow just before diving referee Keith Peterson could intervene, but realizing Lopez was out Assuncao pulled his last punch at the last possible second.

In the after fight interview, Assuncao said he was nervous about fighting Lopez, whom the announcers described as being “Arizona strong.”

“Lopez is a very tough guy, and he had nothing to lose,” Assuncao said.

The fight started out pretty good for Lopez, who was up 10-9 in points on scoring by MMAjunkie after more than holding his own in the first. While both men felt each other out in the opening round and Assuncao appeared to be the aggressor, it was Lopez who landed more strikes and had a late takedown near the end of the round.

In the second round, however, a deep bruise began to form on Lopez’s inside right thigh, the result of some severe leg kicks by Assuncao. Lopez continued to counter with strikes and takedown attempts, but the round went 10-9 to Assuncao in MMAjunkie’s scoring, making the fighter tied heading into the final round.

Assuncao remained the primary aggressor in the final round and continued to wack at Lopez’s now severely bruised right inner thigh.

With just over a minute gone, Assuncao missed with a flying knee, and after Lopez missed with a counter Assuncao landed the right hand that ended the fight. 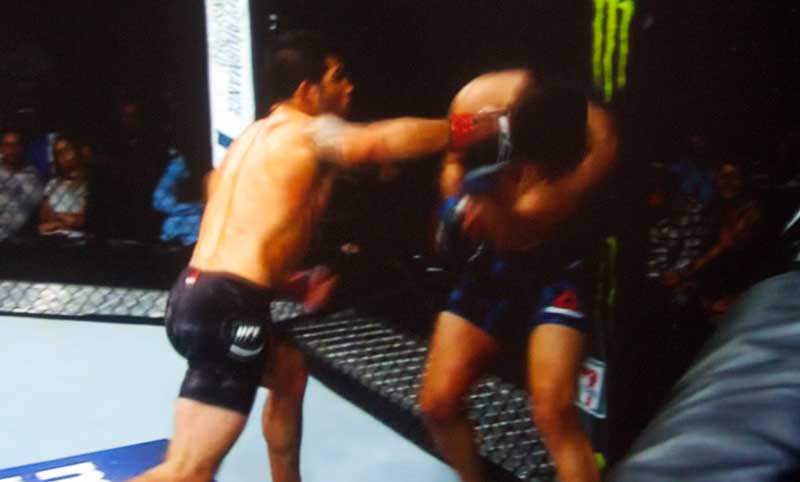 This is the shot that knocked out Matthew Lopez.

No. 13 Bantamweight Lopez (10-2 MMA, 2-2 UFC) will look to bounce back after daring to take on the best fighters in his weight class and, so far, coming up with an even record against them. To add insult to injury, however, Lopez did come in 2.5 pounds overweight at 138.5 pounds and will have to forfeit 20 percent of his purse to Assuncao.

Lopez grew up in Safford and then moved to Tucson for high school, where he was a four-time state champion wrestler with the Sunnyside Blue Devils. Lopez was also the national high school champion in freestyle and Greco-Roman wrestling.

After high school, Lopez continued wrestling for Cal State Fullerton in college. His formerly fought out of Lake Forest, Calif., but relocated to Denver and now trains with Safford’s other big-time MMA fighter, Justin “The Highlight” Gaethje (18-0 MMA), who left the World Series Of Fighting (WSOF) as its only Lightweight Campion and is now in the UFC as well.

No. 6 Lightweight Gaethje is also preparing for his next fight against No. 4 Lightweight Eddie Alvarez (28-5 MMA) on Dec. 2 at UFC 218.