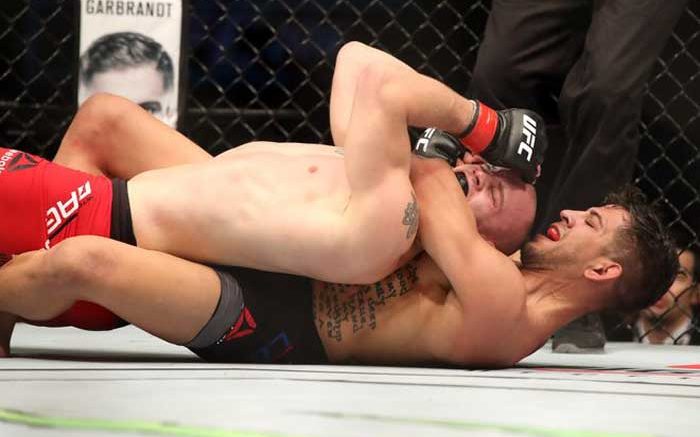 Photo By Tom Szczerbowski/USA Today: Matt Lopez, bottom, attempts to choke out Mitch Gagnon during UFC 206. Lopez went on to win the fight by unanimous decision.

TORONTO – He may have had to travel all the way to Canada to get it, but Safford native Matthew Lopez scored his first mixed-martial arts (MMA) win in the Ultimate Fighting Championship (UFC) on Saturday during UFC 206 at Air Canada Centre. 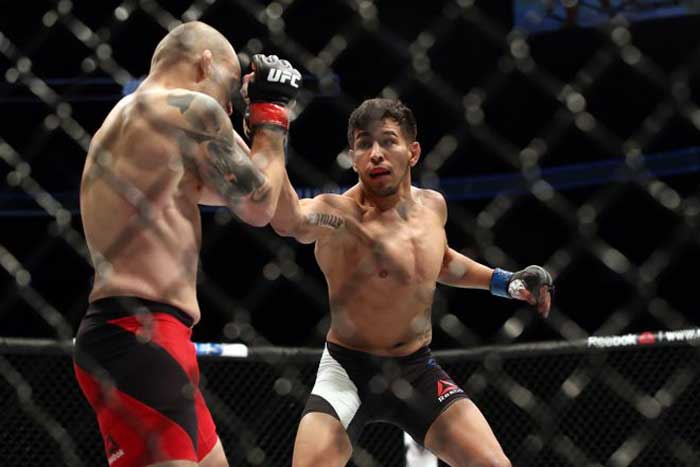 Lopez grew up in Safford and then moved to Tucson for high school, where he was a four-time state championship wrestler with the Sunnyside Blue Devils. He used that expertise Saturday, where he more than held his own while wrestling with the known grappler Gagnon, who was making his return to the octagon after a two-year absence. Lopez was also the national high school champion in freestyle and Greco-Roman wrestling.

After high school, Lopez continued wrestling for Cal State Fullerton in college. His formerly fought out of Lake Forest, Calif., but recently moved to Denver and now trains with Safford’s other big-time MMA fighter, Justin “The Highlight” Gaethje (16-0 MMA), who is the World Series Of Fighting (WSOF) Lightweight Campion. Lopez told Gila Valley Central that he decided to try MMA after he noticed former wrestling opponents having success. 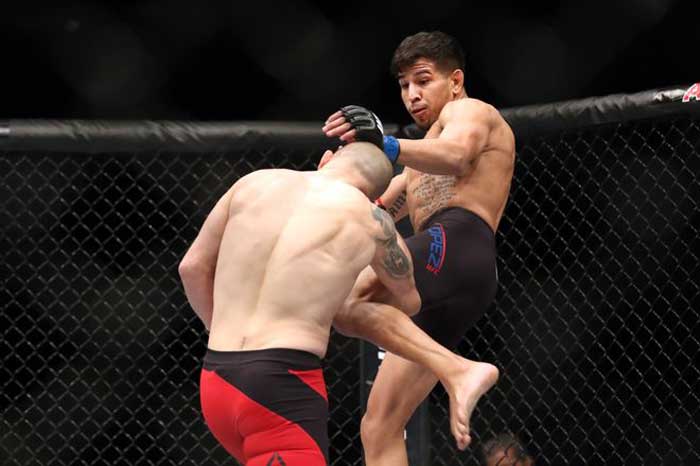 Lopez said he was glad to get the first win but that his ultimate goal is to become the champion in his division in the UFC.

After the fight, Lopez spoke about his wrestling prowess.

“There’s no-one that is going to come close to me in the grappling game,” he said.

The first round was won by Gagnon, however, who caught Lopez with a left hook and then went to the ground and pound. Gagnon attempted to get a choke-hold submission on Lopez, but was unable to finish him. Lopez lost his debut UFC fight in July by a submission to Rani Yahya.

“I got dropped, and I kind of went into auto-pilot,” Lopez said. “But it wasn’t scary because I was just fighting. That’s what I do.”

Lopez continually fought off Gagnon’s submission attempts and managed to score points with reversals and big hits. He owned the second round as he kept Gagnon on the ground on the defensive while taking some shots. Late in the round it looked as if Lopez would score the submission with a rear choke hold, but Gagnon was able to fend him off and was eventually saved by the bell. 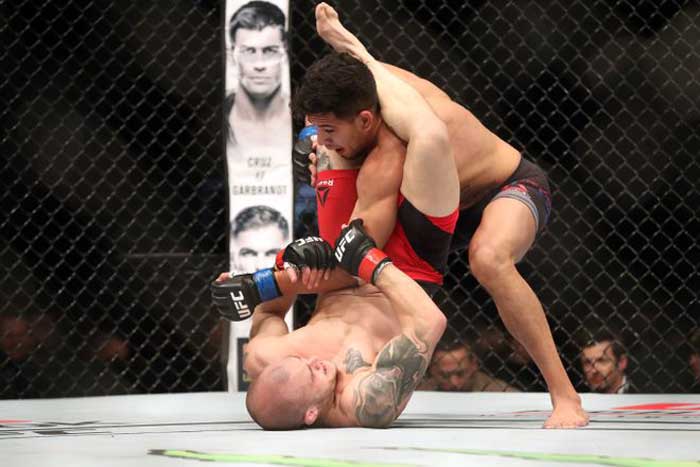 Opening the third and final round, Lopez took a low-blow kick to his groin. The referee stopped the action and allowed Lopez to compose himself. 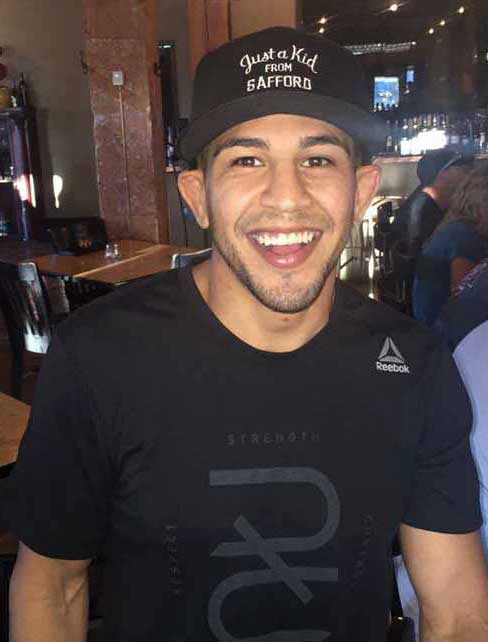 File Photo By Ed Lopez: Matt Lopez sports his Safford hat given to him by Ed Lopez earlier this year.

During the stoppage, the referee told Gagnon that, while he knew the low blow was unintentional, he needed to handle his strikes better.

Lopez controlled the third round, repeatedly taking Gagnon to the ground and showing he was the superior wrestler.

“It’s beautiful control here by Lopez,” commentator Joe Rogan said while calling the fight. “What he’s been able to do more than anything is maintain top position.”

Lopez said he is proud to have gained a loyal following in the Gila Valley and that the fans here are like no other.

“I would like to thank them all for the support,” Lopez said. “I still have a lot of family down there, so everybody tells me about who is watching. They always give me love and feedback. Man, that town is like no other as far as supporting their hometown guys. I’d just like to thank them for that.”

In other local MMA news:

“Luiz Firmino is a veteran of professional MMA and no stranger to our decagon cage,” WSOF President Ray Sefo said. “His addition to a premier title fight against current lightweight champion Justin Gaethje at WSOFNYC makes for an exceptional matchup.”

Boasting an unmatched roster of world-class athletes, the stacked eleven-bout, MMA mega-event features four title fights and star-studded match-ups. WSOFNYC will take place Dec. 31, from 1 p.m. to 6 p.m. ET, with the main card airing live on NBC Sports (3 – 4 p.m. ET on NBCSN, 4 – 6 p.m. ET on NBC). Tickets are available for purchase at the Madison Square Garden box office as well as online at Ticketmaster.com and WSOF.com and priced at $500, $250, $150, $75 and $50. 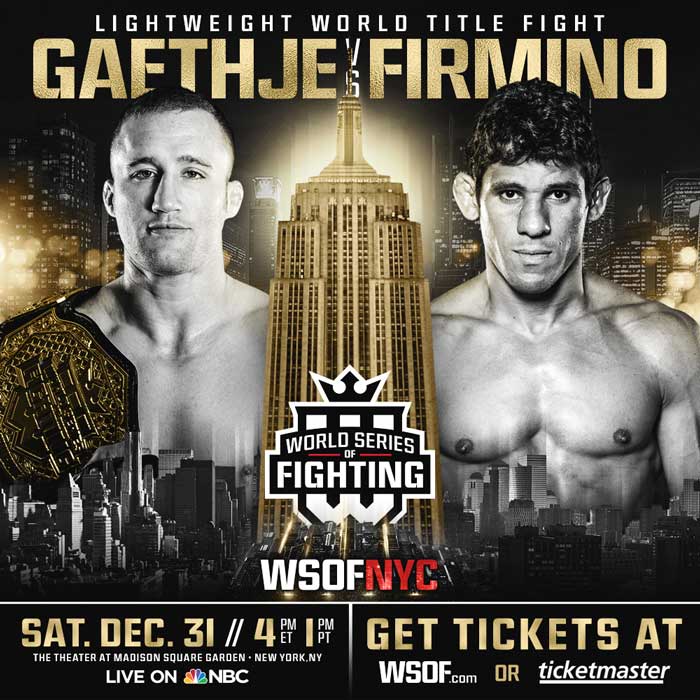