Justin "The Highlight" Gaethje lived up to his name and gave fans something to talk about in his stunning second round knockout victory over Michael Johnson in his UFC debut Friday night.

“Who’s next?” – Justin “The Highlight” Gaethje

“Who’s next?” – Justin “The Highlight” Gaethje

LAS VEGAS – In perhaps the biggest fight of his career to date, Safford native and former World Series of Fighting Lightweight Champion Justin “The Highlight” Gaethje took his talents to the UFC and showed what Gila Valley strong is all about as he took the best shots from Michael “The Menace” Johnson and knocked him out at the end of the second round with a flurry of heavy punches and knees. 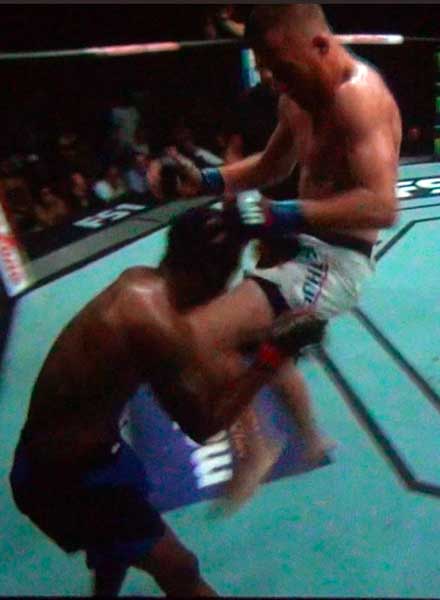 Justin Gaethje lands a flying knee to the head of Michael Johnson late in the second round.

Gaethje (18-0 MMA, 1-0 UFC) opened his UFC career with a pounding of No. 5-ranked Johnson (17-12 MMA, 9-8 UFC) at UFC TUF 25 main event at T-Mobile Arena in Las Vegas on Friday night. Referee John McCarthy stopped the fight with just 12 seconds to go in the second round as a bloodied and beaten Johnson could not stand the onslaught and would not be saved by the bell.

The fight was a stunning match that had the pro-Gaethje crowd on their feet and the announcers gawking.

Gaethje was the aggressor all match perhaps with Johnson’s taunting of him ringing in his ears. Gaethje had the answer, however, as he forced Johnson on his heels the entire match.

Late in the first round, Johnson rocked Gaethje, however, with a hard right uppercut that stunned him. However, Johnson could not capitalize, though he tried, and the round ended.

Again in the second round, Johnson seemingly hurt Gaethje but in video game fashion Gaethje quickly recovered from the injury and continued to chop at Johnson’s legs and body. 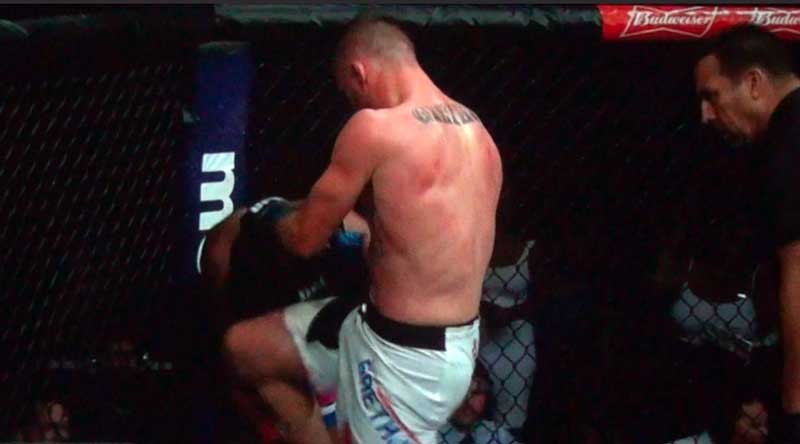 After a flurry of knee shots, Michael Johnson was finished.

A stunning right uppercut from Gaethje caught Johnson and a knee to the body nearly dropped him. After a knee to the head dropped Johnson, instead of pouncing on him to finish the fight, Gaethje told Johnson to get up and take some more punishment and give a little bit more entertainment to the fight. 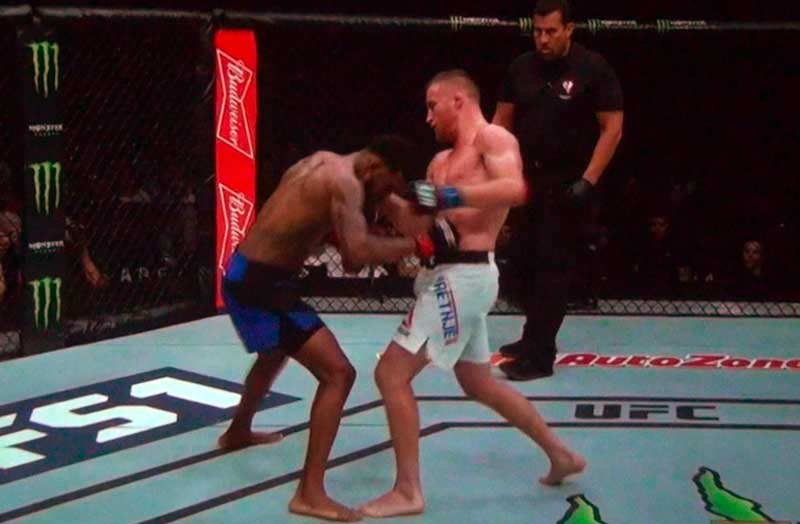 Justin Gaethje shows his relentlessness by continually pursuing Michael Johnson and attacking. Commentators suggested he might add a second nickname “The Terminator” for his never-ending attack style.

Gaethje then dropped Johnson for a second time and again told him to get up. Then came the three straight knees that ended the match.

After the fight, commentators were very impressed with Gaethje’s performance, calling it one of the top three debuts in UFC history and said one more win and Gaethje could possibly see a title bout. He made an extra $100,000 for performance of the night and the fight of the night. Even Connor McGregor chimed in on Twitter with how impressed he was with the fight.

Justin Gaethje celebrates with his customary flip off the top of the ring.

Gaethje is a former all-state wrestler for the Safford Bulldogs and gained All-American status as a wrestler for University of Northern Colorado.

He made his MMA debut Aug. 20, 2011, with a knockout slam against Kevin Croom and amassed a 7-0 amateur record. He signed with the WSOF on Jan. 22, 2013, and quickly rose to become its inaugural lightweight champion with a first-round knockout of Richard Patishnock in January 2014. Gaethje then successfully defended his title five times, as well as a non-title defense because his open didn’t make weight and finished with a 10-0 record.

After dispatching Johnson in Las Vegas, Gaethje has now implanted himself in the title discussion in the highest league of his profession against the greatest fighters in the world.

The tough-as-nails kid with no quit from the small mining community  has certainly previously made good, now he has made great and is on the verge of becoming legendary in the Gila Valley.