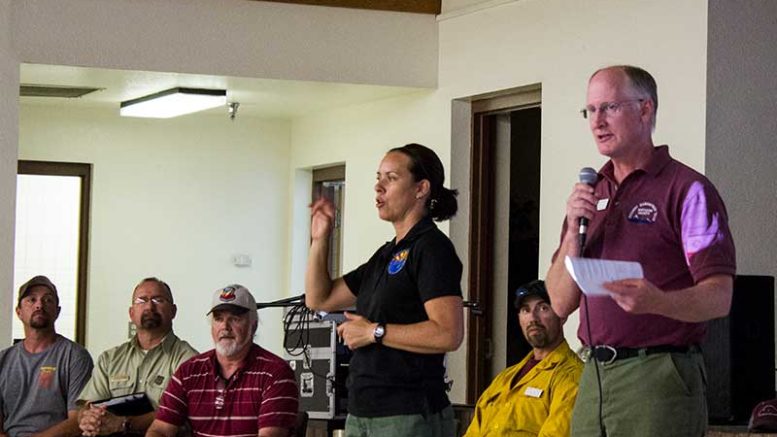 Brooke Curley Photo/Gila Valley Central: Incident Commander for the Northern Rockies Team, Greg Poncin, addresses those attending the meeting beside sign language interpreter, Beth Kovatch, who is with the Arizona Commission for the Deaf and Hard of Hearing.

THATCHER –  The community was briefed on a variety of topics Wednesday night as to the Frye Fire’s location, cabin preservation as well as the indirect tactics that are now in place to reduce fire fuel sources and tree mortality rate.

Graham County Sheriff P.J. Allred was one of the first speakers to address the community. Allred stressed that although many within the community are upset about the Frye Fire situation, their aggravation shouldn’t be taken out on the firefighters themselves but instead be addressed toward elected officials. Allred also thanked the firefighters for their work. After the briefing, Allred told Gila Valley Central that the fire was inevitable because of the way the mountain had been cared for.

“Mother nature did what she’s going to do but we helped her a lot by not taking care of the forest and getting rid of the fuels that made it burn like it did,” Allred said. “This fire started long before the lightning struck. It’s been preparing itself for years and years since the last fire that we had because the forest is not clean. There’s people out there that won’t allow us to make it clean. And yeah it’s the Forest Service, but there are also other special interests groups for their own reasons do not want us in the forest, and this is what happens.” 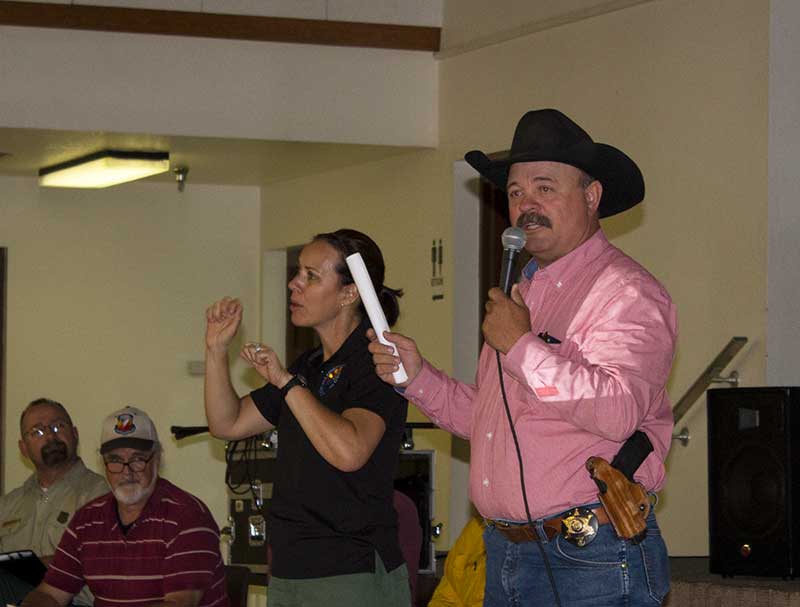 Brooke Curley Photo/Gila Valley Central: Graham County Sheriff P.J. Allred was one of the first speakers to address the community. Allred stands beside sign language interpreter, Beth Kovatch, who is with the Arizona Commission for the Deaf and Hard of Hearing.

After Allred’s comments to those attending, Brent Olson, the Fire Operations Branch Director, illustrated the Fry Fire’s movements and condition. Olson said that in light of the future heat and dry temps, the crews are sending out scouts to patrol areas surrounding the current fire to the west.

“There’s a fair amount of hot dry days left, so we’re also doing some recognizance work to the west, going down the Klondyke Road, the Aravaipa Road, identifying some of the structures out there,” Olson said. “(In) some of the areas we have to do some structure protection if the fire does end up moving further to the west. Looking out at the north end of the fire, this is, by and large, is in control status. The fire has burned into a fuel-type change and has largely gone out.” 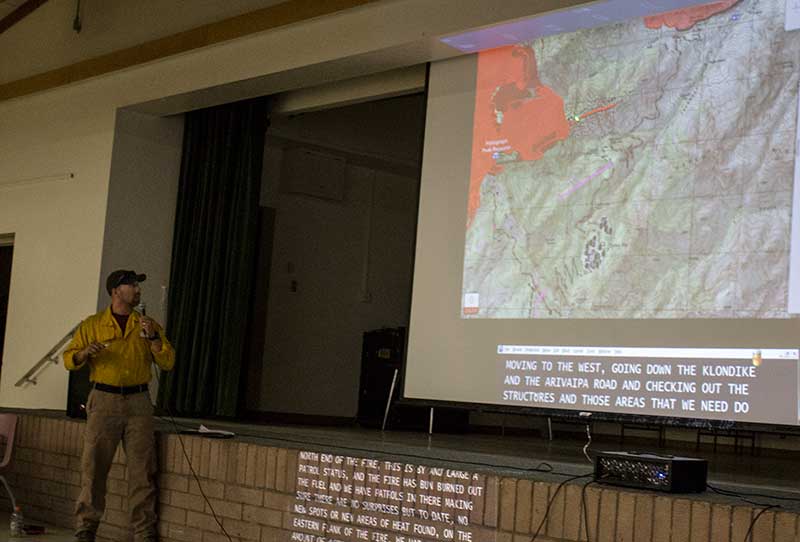 Olson also told the attending community members that efforts were still in place to protect campgrounds, the telescopes and lakes. Scouting around the entire fire perimeter is taking place to ensure that the crews are properly informed about structures and locations in case the fire shifts.

“Lastly, the southwest corner of the fire we have a lot of structure protection resources on the top,” Olson said. “Working around Columbine, Old Columbine, Bible Camp, the observatory and all the way out to Riggs Lake, they’re doing mop up and also doing snag removal and finishing up a small burning operation around Riggs lake to try and lock that into a road back into that area.”

Incident Commander for the Northern Rockies Team, Greg Poncin, took command of the fire Sunday night. Poncin lauded the hospitality of the community and the Thatcher Unified School District. Thanking the community for the warm welcome, Poncin also acknowledged that Mount Graham was a special place with diverse assets and habitats. However, Poncin stressed nothing is worth more than a firefighter’s life.

“There is some incredible stuff up there,” he said. “It’s not just the residences at Old Turkey Flat, the observatory, Old Columbine, the Heliograph, those (are) values that we’re trying to protect. (But) there’s a lot of other stuff up there too, (such as) critical habitat for some species that are found nowhere else in the world. And we understand that. The habitat up there is very special, and the work that we’re trying to do to suppress this fire will take that into account. Having said that, there is no value more important than the firefighters’ lives up there, or the public who may be impacted as well.”

Poncin said because of the rough terrain it is unsafe for the firefighters to meet the fire at its direct edge. Instead, the firefighting operations has taken what he called an indirect tactic to fight the fire. By using airplane drop support, and back burning the underbrush, Poncin said fire crews hope to reduce tree mortality as well as reduce fire fuels.

“We’re using techniques that result in very low-intensity kind of burning, so that we can reduce tree mortality and still reduce the fuels that would under more severe conditions result in a more intense fire that we would not be able to control and therefore do more damage,” he said. “So, that’s the goal. In order to accomplish that, we have to be patient and use the time to our advantage. With the fire moving the way it is, and right now it’s just a backing fire, which is kind of what we want to see, we are preparing to protect Turkey Flat and bring the fire around to minimize it’s impact to those structures and the critical habitat on the face of that mountain.”

Mount Graham is currently closed to the public and is a no-fly area for drones. For more of the latest news on the Frye Fire, visit Gila Valley Central for continued updates.