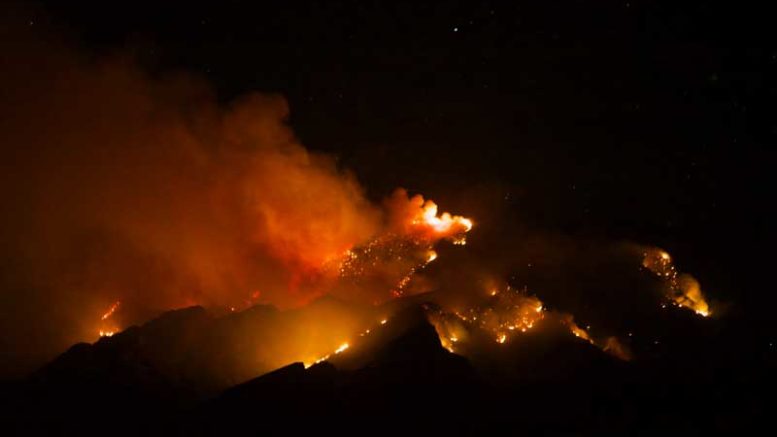 Jon Johnson Photo/Gila Valley Central: The Frye Fire that has burned more than 48,000 acres on Mount Graham has been nearly extinguished by monsoon rains. This photo shows how the fire looked on June 15.

MOUNT GRAHAM – From when the first response teams arrived to battle the Frye Fire, they all repeated the same mantra that the Frye Fire wouldn’t be extinguished until the monsoon rains put it out. They were right. 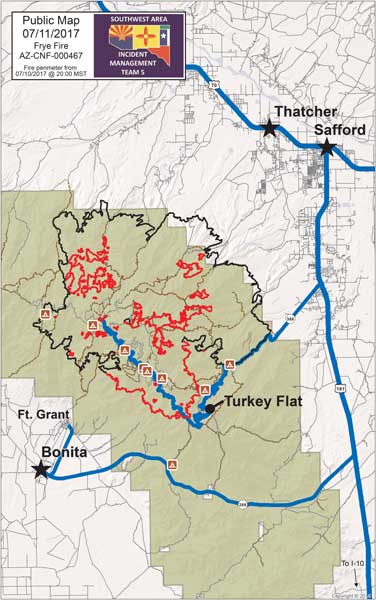 Though not completely out – it did grow six acres from Monday to Tuesday – the consensus is the fire could be fully extinguished after another round of storms pass through. With that in mind, the Southwest Area Type 2 Incident Management Team 5 will be transitioning out of the area and will hand over management of the fire Thursday at 8 p.m. to a Type 3 Incident Management Team, according to Frye Fire public information officer Tom Story.

Through diligence, strategic planning, equipment, millions of dollars and plain hard work, those battling the Frye Fire have limited its impact on the mountain and have secured nearly all assets safely. Only one structure has been destroyed, a shed at Old Columbine that housed a water chlorinator, and one structure damage, the Webb Peak Lookout tower. The multi-million dollar Mount Graham International Observatory with its variety of telescopes peering into the fringes of space was spared, the historic cabins at Old Columbine, recreational places, including Riggs Lake and several campgrounds and other areas, the historic Angle Orchard and the summer get-away cabins at Turkey Flat have all be spared from the flames of the largest wildfire in Arizona this year to date.

As of Tuesday morning, the Frye Fire was listed at 48,441 acres (just up six acres from the previous day) with 80 percent containment. The fire was started by lightning June 7 at about 2:45 p.m. and has cost roughly $23.6 million to fight to date.

With the seasonal monsoonal moisture extinguishing the blaze, the focus has now turned to preparing against possible flash flooding as the thunderstorms increase the risk of ash and sediment flowing down the canyons during storm runoff. Debris flows have already impacted the roads on Mount Graham, forcing the Arizona Department of Transportation to have to assess the area to see if it is safe for fire personnel to travel.

Firefighters continue to labor, chipping brush and removing hazard trees to improve safety conditions, according to a news release from the Forest Service. Additionally, a Burned Area Emergency Response Team continues to map the fire damaged area to figure out erosion control needs. Now that the fire is going out, the next step will be to implement the plans the mapping lays out to deal with the different levels of damage.

Contributed Photo/Courtesy Forest Service: Due to firefighter diligence, several areas were not damaged by the Frye Fire.

A community meeting will be held Wednesday at 7 p.m. in the Thatcher Middle School cafeteria to advise the public regarding the fire and flooding potential.

The mountain remains closed to the public, and no timetable has yet been released as to when it will reopen. The entire Coronado National Forest remains under Stage 2 Fire restrictions and the temporary flight restrictions remain in place.

The Graham County Board of Supervisors passed a resolution July 7 declaring a state of emergency due to the risk of flooding from the Frye Fire, which will open the doors to funding the fight. Additionally, crews with the city of Safford have been cleaning out areas to catch the water and debris as it comes down the mountain.

Graham County Health Department Director Brian Douglas said he has already submitted a grant application to the USDA for flood mitigation, with the priority being for Pima due to a doubled flood risk since the fire burned hottest above that area and in that watershed heavy rainfall could likely spill ash and debris into the town.