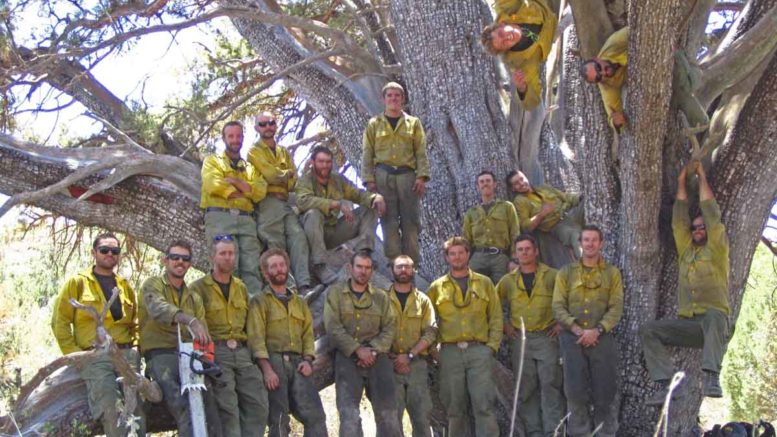 The Granite Mountain Hot Shots celebrate saving this Juniper tree. Soon afterward, they were called to fight the Yarnell Fire, where they died on June 30, 2013.

Firefighters battling the Frye Fire on Mount Graham took a moment to honor the 19 members of the Granite Mountain Hot Shots, who died on this day four years ago on the Yarnell Fire. 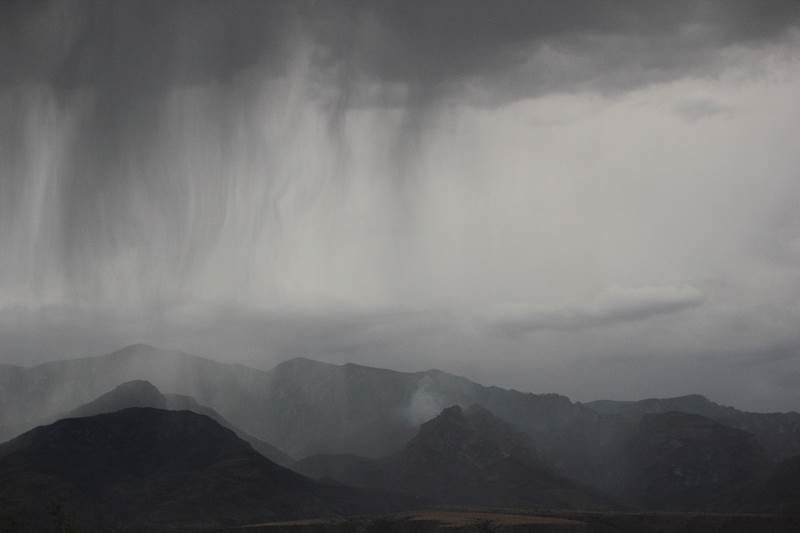 The United States Forest Service has repeatedly asserted its position that firefighter lives come first in how they choose to battle forest fires. It was that directive that gave Safford District Fire Management Officer Everett Phillips pause on sending his 8-person crew in to fight the 5- to 10-acre fire when it was first ignited by lightning, June 7, at 2:45 p.m.

“You can put this on me,” Phillips previously said. “My decision was to not put those guys on the side of the hill because I knew eight folks were not going to pick up a 5-acre, 10-acre fire. The air resources were not available. We asked, (but) they had other fires going that were threatening the community of Dragoon (and) they were running all their air tankers down there . . . Not being able to have that resource, it goes back to me that I’m not willing to risk somebody’s life on the side of the hill.” 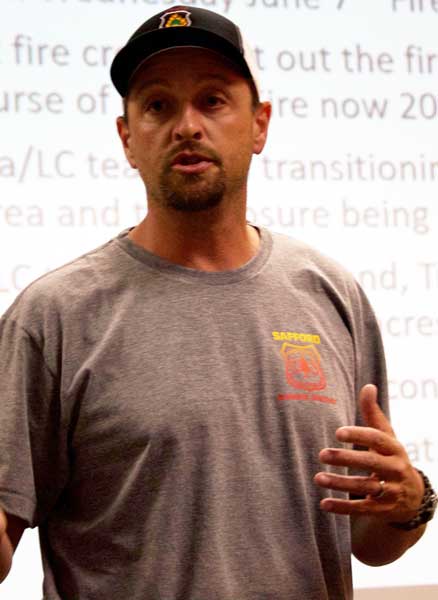 Previously, firefighters had aggressively attacked fires in the same area and nearly paid the ultimate price for it with close shaves with death. With no aerial resources available and not being able to directly attack the fire, an indirect strategy was conducted, including asset protection, and the fire started out by doing a service to the mountain by cleaning up old, dead logs and trees from the 2004 Nuttall Complex Fire. However, weather conditions, including low humidity and blustery conditions, helped the fire blossom out of the Nuttall Complex burn scar.

The fire has now grown to 41,327 acres as of Friday morning, with 45 percent containment. The cost to fight the fire has risen to $14.2 million and there have been three different levels of incident management teams coordinating firefighting efforts. Currently, the Northern Rockies National Incident Management Team heads the effort to quell the blaze and protect structures.

Ever since the fire eclipsed the Mount Graham International Observatory, Bible Camp, Columbine and cabins at Old Columbine, the main focus has been to protect the cabins at Turkey Flat as the fire made its way toward the area. Structure protection worked on the northern side of the mountain, with a timely retardant slurry saving the observatory, and only a lookout tower is listed as being the only structure lost to date. The water chlorinator shed at Old Columbine was destroyed and Webb Peak Lookout Tower was damaged. There have been no injuries while battling the fire.

The structure protection efforts at Turkey Flat are ongoing, with a variety of sprinklers, burn out operations and other plans in the fold. The area has more than three miles of hose and a portable water storage capacity on site of 40,000 gallons. 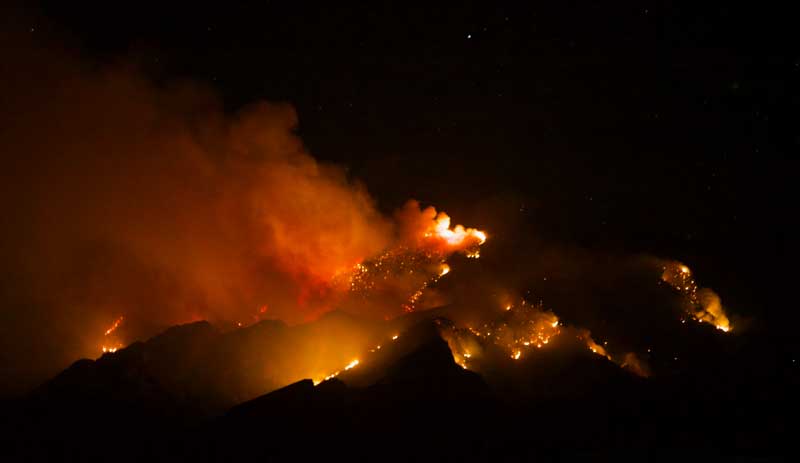 One of the way the firefighters battle the fire where they cannot be inserted is to get the fire to come to where they can comfortably fight it. One way of achieving that is through aerial ignition back burns, which helicopters dropped a Delayed Aerial Ignition Device (DAID) or ping pong ball system. The DAID utilizes plastic spheres containing potassium permanganate and are injected with ethylene glycol before being immediately jettisoned. The chemicals react thermally to produce a flame that consumes the ball. The balls can be efficiently dropped to create most any type of burn pattern desired. Yesterday, an aerial ignition took place at Fort Grant Vista Point and Big Creek along Highway 366. The intent was too allow firefighters to move the fire from an uncontrolled fire edge slope through unburned islands of vegetation to Highway 366, so they could effectively then put it out.

Jon Johnson Photo/Gila Valley Central: A Chinook helicopter flies back toward the airport to refuel. Helicopters continue to provide assistance with water drops.

Additional aerial ignitions could take place Friday on the southeast side of the fire. If that occurs, prepare to see another influx of helicopter that were witnessed Thursday, as crews dumped 260,000 gallons of water in the aerial to keep the aerial ignitions in check.

Crews continue to perform “mop up” work near the MGIO, Old Columbine and Bible Camp, while actively fighting the fire near Riggs Lake.

Mount Graham remains closed to the general public and Stage 2 Fire Restrictions are in effect for the entire Coronado National Forest.