THATCHER – A grandmother was booked into the Graham County Jail on Saturday night after allegedly admitted to driving her 6-year-old grandson from Globe to the Gila Valley while high on methamphetamine.

Shannon Gail Ledbetter, 54, of Safford, was initially arrested for an outstanding shoplifting warrant but had drug charges added after meth was found on her during a strip search at the jail during booking. 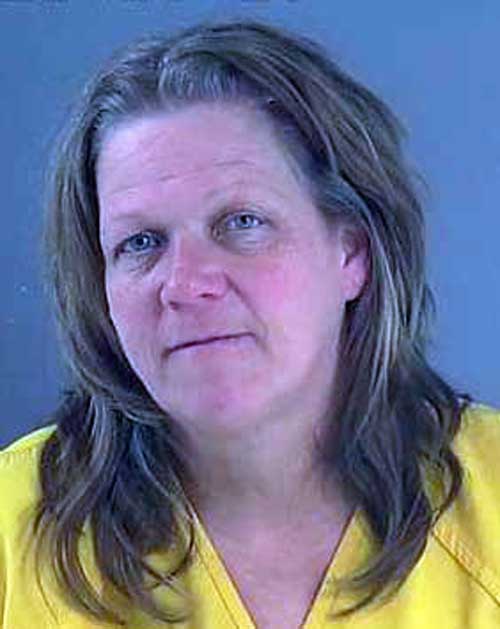 According to a Thatcher Police report, an officer initiated a traffic stop on Ledbetter as she was eastbound on U.S. Highway 70 at about 8:40 p.m. The officer noted he observed Ledbetter traveling at 49 mph in the highway’s 35 mph zone just east of College Avenue. The officer began to follow Ledbetter and observed her drift out of her lane of travel and quickly jerk back three times.

Upon contact, Ledbetter allegedly said she was traveling with her grandson from Globe to her residence in Safford so the child could spend the weekend with his father. After checking Ledbetter’s identification, the officer was informed she had an outstanding warrant out of Safford Municipal Court for shoplifting with a $205.47 bond.

The officer then placed Ledbetter under arrest and allowed her to call an acquaintance to pick up the child. Ledbetter also gave her acquaintance her debit card, so she could get retrieve bond money to bail Ledbetter out of jail.

Nearly two hours after dropping Ledbetter off at the jail, the officer was called to return. A jail sergeant informed the officer that since the acquaintance hadn’t showed up to bail her out, Ledbetter was dressed for booking, which included a strip search. During the search, the sergeant located a clear plastic baggie with approximately one gram of meth in Ledbetter’s pant leg.

Ledbetter allegedly admitted to having the meth and said her daughter in Globe had procured it during her visit. She said she and her daughter snorted some meth and that she did so to help her forget her problems.

After using the drug, Ledbetter said her daughter gave her the leftover meth and she forgot she had it in her pants.

The officer then tested Ledbetter’s urine and it came back positive for meth. The substance in the baggie also tested positive.

Ledbetter was then booked into the jail on her warrant as well as charges of possession of a dangerous drug, possession of drug paraphernalia and promoting prison contraband. An additional aggravated DUI-drug charge is pending urinalysis with the Arizona Department of Public Safety Crime Lab in Tucson. The report was sent to the Graham County Attorney’s Office for review and official charging.

Woman has odd encounter with strange man in her home