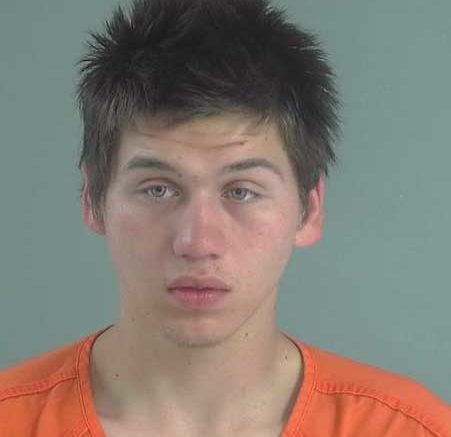 Contributed Photo/Courtesy GCSO: Indy Benson was booked into the jail on a charge of criminal trespass in the first degree after surprising a woman by being in her home.

THATCHER – A woman was shocked to discover a strange man in her home after she returned from playing in a strings concert Saturday night.

The incident took place at a residence in the 1300 block of N. High School Avenue. The victim called police at about 9:32 p.m. to report a stranger had let himself into her residence. Since she was alone with her husband out of town, when she got the chance the woman left her residence and called for police while en route to the Thatcher Police Department.

An officer met the woman, who said after she returned home from her concert she heard a male’s voice say “hello” and she was stunned to find a man standing in her living room.

The man, later positively identified by the woman as Indy Chance Benson, 20, of Thatcher, introduced himself to the woman and said he wanted to “see and meet her before he had to leave and meet up with some of his friends,” the woman told police.

Benson left the residence shortly after the encounter, and the woman left to speak to the police.

While at the police department, other officers were sent to search for Benson, who was found walking around the area of the woman’s residence.

Benson allegedly said he saw the woman return home and thought her violin case held a guitar. He went to knock on the door because he wanted to meet her and ask her if she played guitar, but the door opened, so he went inside and met her. He asked if he could speak to the woman and apologize but he was not allowed to do so.

Benson was informed that the woman did not want him in her home. He was subsequently arrested for criminal trespass in the first degree and booked into the Graham County Jail.