THATCHER – An intoxicated man picked a fight with a police officer who was giving him a ride home early Sunday morning and it did not end well. 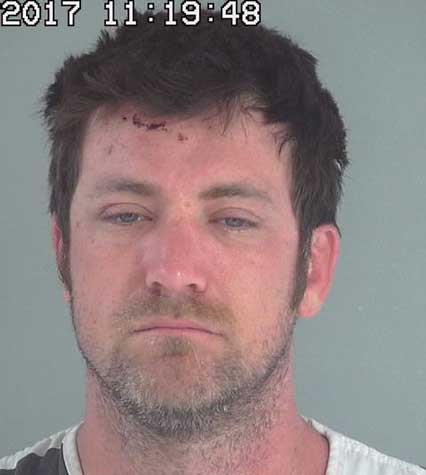 Contributed Photo/Courtesy GCSO: James Allen was booked into the Graham County Jail on charges of criminal damage, resisting arrest and aggravated assault on a police officer.

James Michael Allen, 34, was arrested and booked into the Graham County Jail on charges of criminal damage, resisting arrest and aggravated assault on a police officer, which is a felony.

According to a Thatcher Police report, Allen was initially identified as a suspect of a sexual assault. After the victim refused to press charges however, a Thatcher officer offered an obviously intoxicated Allen a ride to his residence in the 200 block of N. Stadium Avenue at about 4:53 a.m.

Upon arrival, Allen allegedly began to yell at the officer. The officer told Allen to go inside and sleep off the booze.

At about 5:16 a.m., the officer drove down Stadium Avenue to make sure Allen wasn’t still outside yelling. While doing so, Allen began to throw rocks at the officer’s patrol vehicle, hitting it multiple times.

The officer attempted to then put Allen under arrest, but Allen shouted expletives at him and resisted. The officer initially pushed Allen back twice, but when Allen came at him again, the officer reported he began to strike Allen in his face with a closed fist and wrested him to the ground.

At that point, additional officers arrived on scene and assisted in subduing Allen by the administration of pepper spray to Allen’s face by a Safford officer. Allen then complied and was taken into custody.

Allen was examined by paramedics from Lifeline Ambulance and was allowed receive an injection of insulin for his diabetes before being taken to jail.

While in transport, Allen continued to threaten the officer and the officer’s family and denied ever throwing any rocks. He was then booked into the jail without further incident.

Woman has odd encounter with strange man in her home