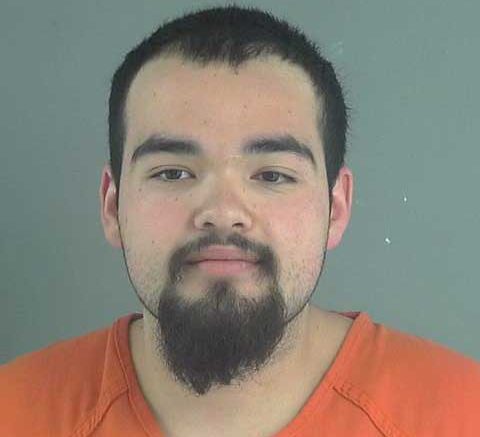 Contributed Photo/Courtesy GCSO: Juan Colunga was booked into jail after allegedly throwing marijuana paraphernalia at his girlfriend's truck, breaking its back window.

SAFFORD – He can still “dab” in jail, just not the kind that will get him high.

Juan Pedro Colunga, 22, was incarcerated Dec. 4 after allegedly throwing his e-rig at his girlfriend’s truck, breaking its back window as she drove away.

An e-rig is an electronic device that allows users to consume concentrated Marijuana in a process called “dabbing”, in which the concentrate is heated up on a hot surface (usually a nail) and then inhaled through a dab rig. The “dab” is also a popular dance move involving simultaneously dropping one’s head into their elbow as if they were sneezing while raising the opposite arm.

A Safford officer was initially dispatched at 2:35 a.m. to the entrance of the Pinaleño Foothills Apartments at 2500 S. 17th Ave. regarding a domestic dispute with criminal damage. The complex is a low-income housing project that has been in service since 2007.

The victim informed the officer that her boyfriend, Colunga, was watching their daughter while she was at a bridal shower in Morenci. When she came to pick her up, the pair began arguing, and Colunga threw an object at the back of her truck as she drove away, according to the victim. She then pulled over and called 9-1-1. There were no reported injuries.

Colunga allegedly said he had been watching his daughter all night for his girlfriend, and when she came to pick up her daughter, she began acting crazy and breaking things. He said his girlfriend broke his bong (marijuana water pipe) and his marijuana grinder. He then allegedly admitted to throwing his e-rig at the truck’s back window as she was driving away, breaking it.

Colunga was then arrested and booked into the Graham County Jail on charges of disorderly conduct/domestic violence and criminal damage. His case was subsequently filed in Safford Municipal Court the following day.

Man accused of assaulting girlfriend and father in separate incidents