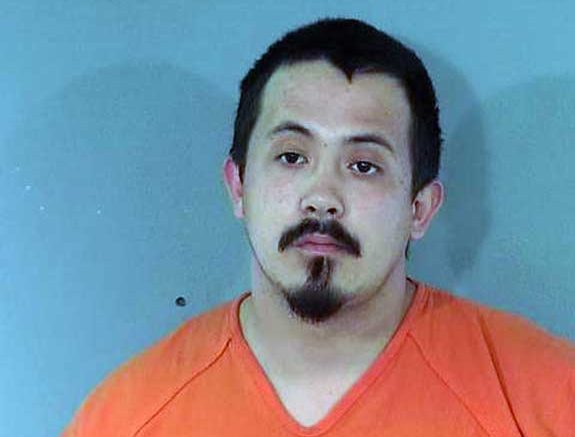 Contributed Photo/Courtesy GCSO: Matthew Barela is wanted for questioning for an assault/domestic violence and burglary case against an ex-girlfriend.

SAFFORD – Police are on the lookout for a man who allegedly assaulted his ex-girlfriend and committed burglary by forcing his way into her residence March 17.

Matthew James Barela, 24, is wanted by authorities for questioning regarding the case. Officers believe Barela may have committed a variety of crimes, including assault/domestic violence, burglary in the second degree, criminal trespass in the first degree and criminal damage.

Police responded to a residence in the 100 block of W. 15th Street at about 10:05 p.m. regarding a domestic fight in progress. Upon arrival, officers located the victim, who was crying while holding her 13-year-old daughter.

The victim told officers that Barela had pulled up next to her vehicle while she was parked on 15th Street and began yelling at her that he did not want her to see other people. She said he then assaulted her by punching her in her head two times. He then allegedly grabbed her cell phone and smashed it on the ground.

The victim fled from Barela and ran into her house and locked the door. The suspect then allegedly broke the victim’s window and entered her home. The victim then fled her residence and ran to a neighbor’s home to call the police.

The victim’s daughter and brother heard the breaking window and saw the victim run from the house. Her brother confronted Barela and told him to leave his sister alone. Barela then allegedly knocked the victim’s brother to the ground and began striking him. The victim said Barela saw her on the phone with the police and then fled the scene in a black Chevrolet Silverado pickup truck.