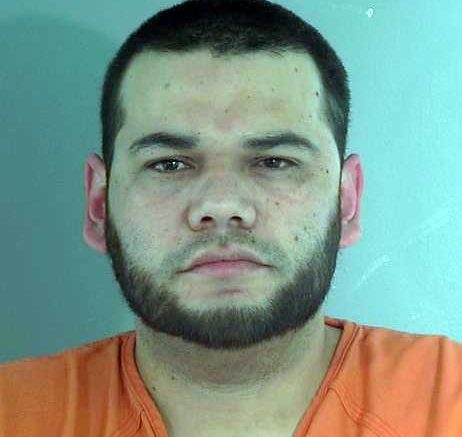 Contributed Photo/Courtesy GCSO: Simon Castro was jailed and accused of assaulting his girlfriend and father in separate incidents the same evening.

GRAHAM COUNTY – Simon Andrew Castro, 29, was booked into the Graham County Jail early Saturday morning on two counts of assault/domestic violence and another count of disorderly conduct/domestic violence for allegedly assaulting a long-time girlfriend and his father in two separate incidents the same evening. October is domestic violence awareness month.

A deputy was initially dispatched  at about 11:18 p.m. on Friday regarding an assault at a residence on South Rustic Way – located just outside of Thatcher town limits along 8th Street between First Avenue and Robinson Ranch Road.

Upon arrival, the assailant had already left the scene in his blue Toyota Camry, and the victim did not require medical attention.

The victim, who said she previously had a romantic relationship with Castro for 10 years before breaking up six months ago, informed the deputy that Castro had thrown her down onto the grass during an argument.

After arriving at her residence, the victim ushered her children inside and retrieved a leash with a metal clip at the end from Castro’s car. She then threatened to break his windshield if he didn’t stop calling her names, according to her statement to police.

Castro then allegedly got out of the vehicle and the victim said she dropped the leash. She said she attempted to get into her residence, but Castro pushed her onto the grass. At that point she said she was calling the police, and Castro, who was believed to be intoxicated, left the area in his car.

Castro allegedly called his father about the incident, and his dad asked him to go see him at C&C’s Hideaway Bar at 8038 S. U.S. Highway 191 at the highway’s intersection with Swift Trail.

Castro arrived at the bar and was having a discussion about the incident with his father and grandfather when he struck his father with a closed fist to the left side of his face. As the scuffle brought the two men onto a pool table, Castro’s father also suffered a laceration to the bak of his head by his ear, according to Sheriff’s Office reports.

At that point, other bar patrons managed to push the men outside of the establishment, where the scuffle allegedly continued until the arrival of deputies a little after 1 a.m. The victim, his father and several witnesses all fingered Castro as the aggressor and that the victim was simply trying to defend himself. The victim also said he never punched back and that the incident stemmed from Castro’s alcohol problem, which was also the reason Castro is on intensive probation. Court records show Castro was placed on supervised probation in November, 2015 after he took a plea agreement and plead guilty to aggravated DUI and endangerment.

After being taken into custody at the bar, Castro admitted to punching his father and pushing his girlfriend. Castro allegedly told a deputy that he had set his father in his place and that he “knocked the (expletive deleted) out of” his dad.

As far as the incident with his girlfriend, Castro admitted pushing her but said he only did it to prevent her from breaking his windshield.

Castro was transported to the jail and booked on a charge of assault and disorderly conduct for his alleged actions at the bar and another charge of assault for the incident with his girlfriend with all charges listed under the domestic violence designation.