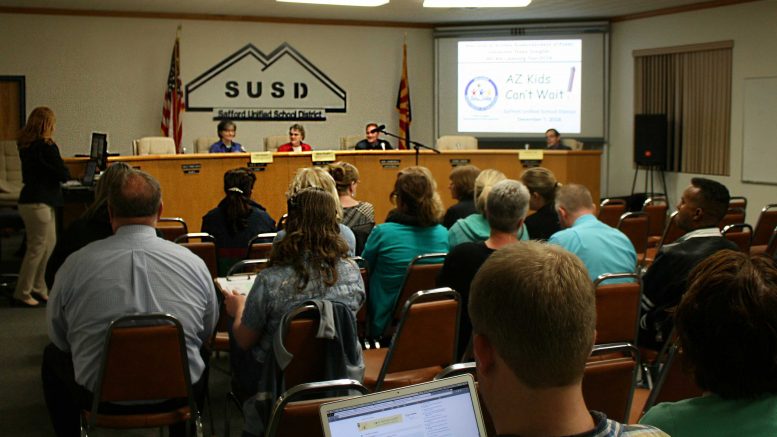 Brooke Curley Photo/Gila Valley Central: A crowd of people awaits their chance to bring up issues and discuss plans with the Arizona State Superintendent of Public Instruction .

SAFFORD – On Wednesday night, the public was given the chance to voice their questions and comments on the future and current conditions of schools to the state’s head educator.

Diane Douglas, Arizona State Superintendent of Public Instruction, came to Safford on Wednesday for the last stop of her “We Are Listening” tour. Douglas has traveled throughout Arizona on the tour, listening to questions of comments of parents and teachers in an attempt to grasp a firmer hold on the issues and challenges educators are facing in the current Arizona educational scene.

The opening of the meeting began with a moment of silence, followed by the Pledge of Allegiance. After these, Douglas jumped into summarizing last year’s changes and the upcoming year’s expectations. She addressed teacher salary increases, prioritizing rural transportation funding, funding rural school support services and fully funded capital to build new schools.

“I wish I had a magic wand,” Douglas said. “I want to make things happen. It doesn’t work that way, but I’m an advocate.”

Douglas told the audience that there the Every Student Succeeds Act would be going through some changes. This new law authorizes the Elementary and Second Education Act and replaces the No Child Left Behind Act. Douglas then expressed her opinion that student success was being based too much on standardized test results.

“As far as I’m concerned, our children are tested way too much,” Douglas said.

After her initial remarks, the floor was turned over to those who attended the meeting so they could address their concerns directly to Douglas. The issues brought forth included educator recruitment, concerns with the new testing and salary supplements for teacher aids in the event of a natural disaster.

Douglas told Gila Valley Central that although she campaigned near Safford, this was the very first time she had come to visit the city.

“I think this is my first time in Safford,” Douglas said. “I’m delighted to be here. The rural areas are very much on our radar screen.” 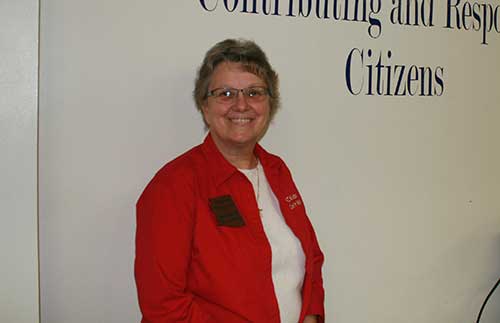