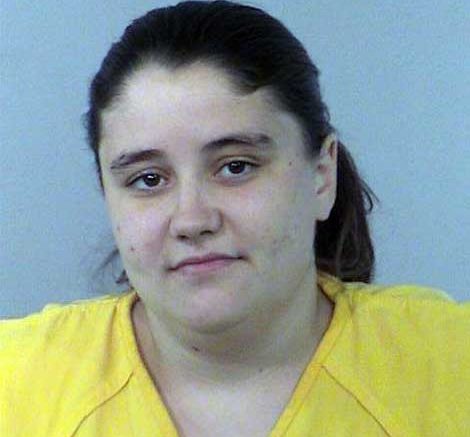 Contributed Photo/Courtesy GCSO: Tiffany Crystal Moore was arrested and booked into the Graham County Detention Facility for assault after allegedly punching a woman at Walmart who took issue with Moore repeatedly slapping Moore's 3-year-old daughter in the face.

SAFFORD – A Walmart shopper was taken into custody Wednesday, Dec. 6, after her anger got the better of her and she not only slapped her own child but assaulted a concerned citizen who intervened on the child’s behalf.

Tiffany Crystal Moore, 25, of Safford, was arrested and booked into the Graham County Jail on a charge of assault after the incident occurred at Walmart at 755 S. 20th Ave.

The adult victim witnessed Moore repeatedly smacking the child in her mouth and then push the shopping cart the child was sitting in away, according to her statements to police. The victim then intervened and told Moore to stop or she would call the police, which was later dispatched to the scene at about 8:46 p.m.

At that point, Moore pushed the adult victim and began punching her as well, according to multiple witnesses. The entire scene was also captured on the store’s surveillance video. The adult victim also had signs of trauma with her jaw being discolored and slightly swollen.

By the time the police arrived, Moore had left her child at the store and fled the scene. An investigator called her cell phone and said the police needed to talk to her, to which her response allegedly was, “If you want to speak with me you have to find me.”

An officer then spoke with the Department of Child Services (DCS) and apprised them of the incident and said the grandmother could take custody of the child. DCS also acknowledged it would be initiating an investigation.

At about 10:25 p.m., Moore returned to the store and met with an officer in the parking lot. At that time, she admitted to slapping her child and said she pushed the cart away because she didn’t want to do anything she would regret.

Moore admitted to being angry and when the concerned citizen intervened on the child’s behalf Moore replied, “You don’t know me and this is none of your (expletive deleted) business. Moore admitted she then “went off” on the adult victim and started hitting her, according to the police report.

Moore was then taken to the jail and booked for assault.