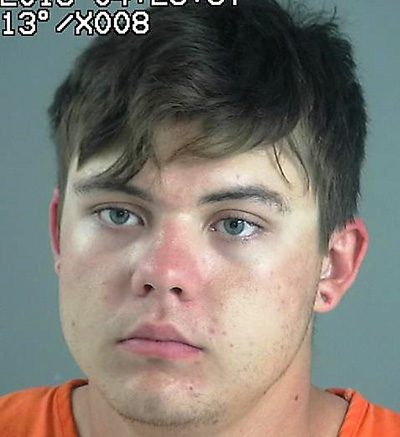 Contributed Photo/Courtesy GCSO: Spencer Green, 19, was jailed after allegedly assaulting his girlfriend over an argument that started at Walmart.

SAFFORD – A man was taken to jail Sunday night after allegedly beating his girlfriend in front of several witnesses.

Spencer Shawn Green, 19, of Safford, was arrested and booked into the Graham County Jail on charges of aggravated assault, criminal damage and a warrant. The warrant stems from a 2015 case in which Green was originally charged with assault, disorderly conduct, criminal damage, preventing the use of a telephone in an emergency and criminal trespassing. Those charges were dismissed by the city attorney after Green plead guilty to violating his promise to appear on the charges. He was then given probation.

On Sunday, the incident apparently stemmed from improper etiquette while shopping at Walmart at 755 S. 20th Ave. Green allegedly told an officer that he and his girlfriend got into an argument at the store and then she would not get out of his way at a freezer so he “bumped” her. That allegedly caused the victim to decide to walk back to Green’s father’s residence in the 1200 block of S. 11th Avenue.

When she arrived at the residence, Green jumped on top of her white, two-door Ford automobile and kicked in the windshield so she couldn’t leave, according to the victim. Green then allegedly struck the victim, choked her and pulled her by her hair over to where he had parked his maroon Cadillac. Once there, Green continued the attack by hitting her head against his own car, according to her statement to police. The victim’s statements regarding the assault were corroborated by three other witnesses, one of which was the one who called 911 and alerted authorities of the situation. Officers were then dispatched to the residence at about 7:16 p.m.

The victim was treated at the scene by paramedics from Southwest Ambulance and then transported to Mt. Graham Regional Medical Center.

Green allegedly admitted to kicking in the windshield but said he did it after the victim attempted to run him over by driving her car forward toward him. However, the officer noted there was a black city of Safford garbage can directly behind the victim’s car, and if the car had moved forward it would have had to then gone back in reverse or the can placed there after the incident. Green did not have an explanation for the garbage can’s placement.

Green also denied assaulting his girlfriend and said he just tried to hold her down to stop her from attacking him and did not know what the witnesses were talking about by describing him on top of her striking her repeatedly.

The officer couldn’t locate any injuries to Green and noted he appeared to have the victim’s blood on his hand. He was then arrested and transported to the jail.