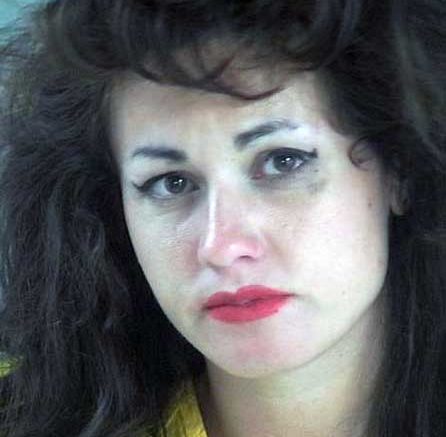 Contributed Photo/Courtesy GCSO: Page Gillespie was arrested and booked into the jail on a charge of possession of drug paraphernalia after allegedly using heroin in a bar's restroom.

SAFFORD – Page Blanche Gillespie, 27, was arrested and booked into the Graham County Jail on Sept. 30 after allegedly being seen attempting to ingest heroin in a bar’s restroom.

Authorities were dispatched at about 8:11 p.m. to Shane’s Place at 609 S. 6th Ave. after a bartender called police on Gillespie.

According to a Safford Police report, the bartender said Gillespie repeatedly entered the establishment to use its restroom to get high.

The bartender said another patron was in the restroom in an adjacent stall when Gillespie allegedly dropped a plastic baggie containing what turned out to be cotton balls with apparent heroin residue. Heroin users who inject the drug commonly filter it through a cotton ball in a process known as “a wash.”

The patron said after Gillespie dropped the baggie she used her foot to drag it back over to her stall. The patron then left the restroom and reported the incident to the bartender, who called the police.

Gillespie was located outside of the establishment and denied the paraphernalia was hers. Gillespie, who has previously been arrested for heroin paraphernalia, denied using heroin. The officer noted what appeared to be fresh track marks on her arm and Gillespie allegedly refused to provide a urine sample for testing purposes by saying that she recently had used crystal methamphetamine and didn’t want to incriminate herself with the urine test.

Gillespie was trespassed from the bar and was then transported to the jail and booked on a charge of possession of drug paraphernalia.