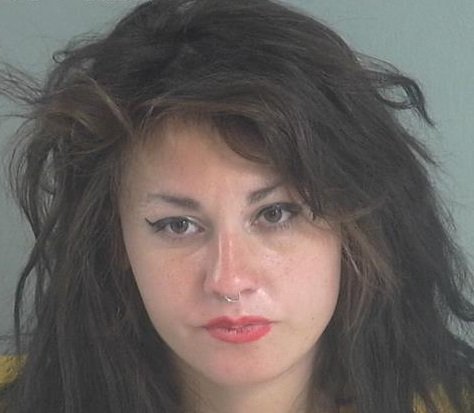 Contributed Photo/Courtesy GCSO: Page Gillespie was booked on a warrant and possession of drug paraphernalia.

SAFFORD – A woman was booked into the Graham County Jail on a warrant and charge of possession of drug paraphernalia and a man was arrested for DUI, as both subjects excuses for their crimes fell on deaf ears.

In the early morning hours of July 1, Page Blanche Gillespie, 27, was booked into jail on a warrant out of Safford Municipal Court for failing to appear to answer a charge of shoplifting and on a charge of drug paraphernalia after officers located used syringes and other drug-related items in Gillespie’s purse and where she was sitting in the car.

When the officer approached the car, he noticed the driver, later identified as Ben Jurado, 31, appeared to be driving impaired.

During the course of the investigation, Jurado allegedly admitted to drinking one beer two hours previously, but a subsequent portable breath test showed his breath/alcohol content at 0.00 percent. However, he failed multiple field sobriety tests and was placed under arrest for DUI.

Jurado allegedly allowed the search of his car, and a used syringe was found floating in partially filled fountain drink in the center console cup holder. A green soda can with burn marks and brown, sticky residue was also located directly under the passenger’s seat.

Jurado, whom officers believed to be under the influence of heroin, advised that Gillespie had dumped the contents of a purse on the floor when they got pulled over and the paraphernalia was not his. The officer noted Jurardo had very constricted pupils but the driver said the last time he used heroin was the previous day.

Gillespie was in possession of two purses and she stated she was sharing a purse with a friend and any drug paraphernalia found in it was not hers.

As the officer looked through one of the purses, he located a purple camera case that contained a used syringe, burnt spoon with brown residue that was possibly heroin, a clear seal with brown tar residue and a water bottle cap.

Gillespie continued to deny that the paraphernalia was hers but then admitted to placing the used syringe in the drink cup in the center console. She also said she did dump out one of her purses but said she did so because she was looking for a lighter.

Gillespie was then taken into custody and booked into the jail on her warrant and possession of drug paraphernalia.