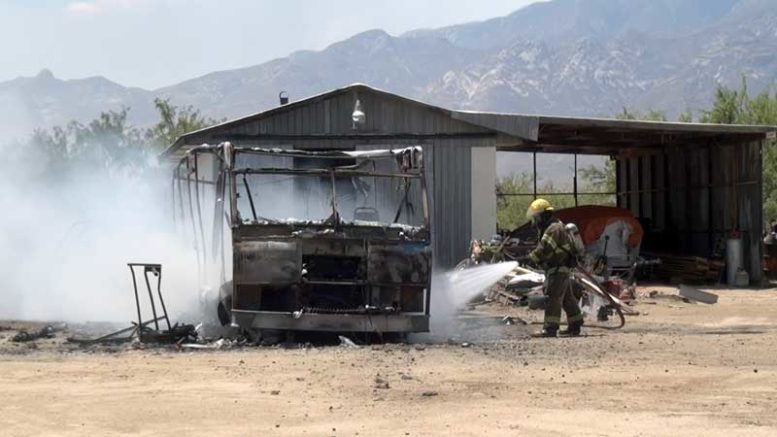 Jon Johnson Photo/Gila Valley Central: A Pima firefighter mops up an burned RV in Ashcreek Acres. A wildland helicopter helped out by dousing the blaze with a bucket of water.

PIMA – A wildland fire helicopter dropped a bucket of water on an RV fire in Ashcreek Acres on Monday, extinguishing the blaze and saving adjacent residences and property.

The incident took place at 7595 Melanie St. and occurred when the carburetor backfired when the owner attempted to start the vehicle.

First responders got the call about the fire around 11 a.m. and Pima Fire was one of the first on scene, along with a ground group of wildland firefighters. The wildland team then called for a helicopter, which circled once, went over to nearby Cluff Pond to intake some water and then made a precise bucket drop, effectively putting out the blaze. Pima firefighters then continued to mop up the area and make sure the RV was fully extinguished.

“That was perfect,” said Pima Fire Chief Adam Hoopes about the helicopter drop. “That was instant game over.” 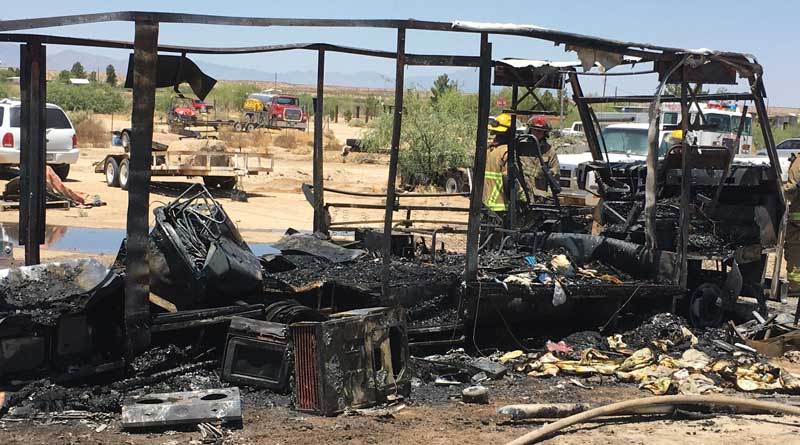 Jon Johnson Photo/Gila Valley Central: The RV was a total loss, but the occupant managed to make it out with minor burns to his arm and leg.

Pima Police Chief Diane Cauthen said the wildland crew saw the fire and came over to help contain it from spreading when they called in aerial support.

“Then the helicopter came and dumped on it,” Cauthen said. “That was pretty cool.”

Gale Switzer, of Central, was in Pima at his son’s residence attempting to start up his recreational vehicle. Switzer was initially trapped in the RV after the fire started. He told Gila Valley Central that he had changed the battery and the motor appeared to almost turn over when suddenly there was a loud backfire and flames leapt up from the engine compartment. He suffered burns to his arm and leg.

“Fire went everywhere,” Switzer said. “It set the curtains on fire and then the carpet started burning . . . It set me on fire and I couldn’t get out. I got excited and forgot which way I had to push the door handle to get out. Finally, I just kicked the door open and rolled around on the ground.”

Switzer then moved his truck and called 911. That was about the time his son, Justin Switzer, came out of his adjacent residence and attempted to put the fire out with a garden hose. Unfortunately, the fire then took off and caused two explosions, according to Gale.

“I thought it was going to burn everything up,” Justin said. 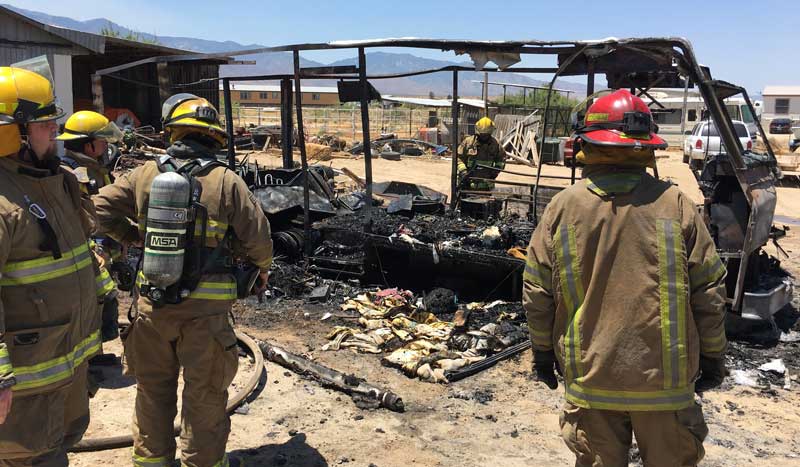 The RV’s butane tank was releasing but it didn’t empty soon enough and exploded. Then the gas tank also exploded, sending flames and smoke high into the air.

“They were real bad explosions,” Gale said. “When I was laying on the floor when it knocked me out that seat and my pants and my shirt and everything were burning, I thought, ‘man this is the end of it. I’ve got to get out of here.’” (sic)

Gale was treated by paramedics from Lifeline at the scene but declined transport to Mt. Graham Regional Medical Center. He assured Gila Valley Central that he would travel to the hospital on his own for continued treatment.

The RV and a Yamaha Rhino utility vehicle were completely destroyed.

Justin joked to Gila Valley Central that once Gale’s wife heard what happened, the fireworks were really going to start.

“You’re in trouble when you get home,” Justin said.