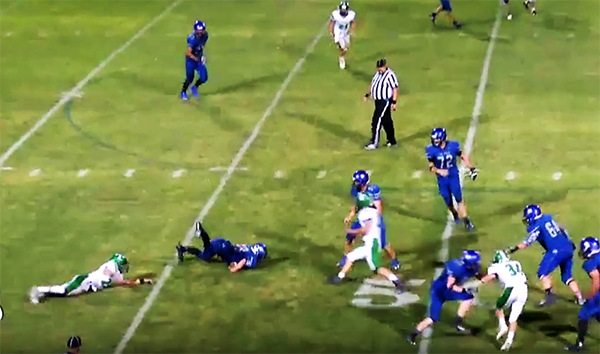 Contributed Photo/Courtesy iTalk 106.7: Two officials on each side of Snowflake's Zach Solomon somehow missed this call and Solomon got off the ground and ran 55 yards for the go-ahead touchdown.

SNOWFLAKE – A defensive masterpiece was sullied Friday night when an egregious missed call by two officials ended up being the winning score as the Thatcher Eagles (3-1) lost their first game of the season to the Snowflake Lobos (4-0), 13-12.

With the Lobos up 7-0 in the second quarter, Quinton Turley intercepted quarterback Trey Schneider to set up the Eagles for their first score of the night and the first points put on Snowflake this season. Thatcher would trail heading into halftime, however, 7-6.

The two teams exchanged field position multiple times in the third quarter, with neither getting the upper hand.

In the fourth quarter, Snowflake’s Zach Solomon took a screen pass to the right and was immediately tripped up by Thatcher’s Jonathan Trujillo. Solomon’s entire upper body, including both elbows and the ball hit the ground as well as his left knee. Somehow, however, two officials on each side of Solomon did not consider him down, and, as the Thatcher players eased up on the play, Solomon ran 55 yards down the right sideline for the go-ahead score.

Contributed Photo/Courtesy iTalk 106.7: Thatcher head coach Sean Hinton argues the opposing player was down as an assistant coach attempts to show the officials the video stream of the game as proof.

Thatcher head coach Sean Hinton pressed his point to the referee that the runner was down due to his elbow hitting the ground, but there is no replay in high school football.

“It’s just sad to take it out of the kids’ hands,” Hinton said. “Those kinds of things happen, but that one was pretty bad.”

While the Eagles were dejected over the call, they certainly weren’t out.

Down 13-7 with just 2:49 left in the game, Thatcher dialed up a halfback pass and backup quarterback Tyler Roebuck hit a wide open Quinton Turley, who scampered all the way down to the Lobos’ 20-yard line before being pushed out of bounds. 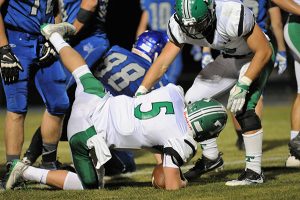 Thatcher then went for a 2-point conversion to win the game, but Dunlap’s pass sailed right and Snowflake was able to run out the clock the rest of the way.

“The kids played hard,” Hinton said. “It was a tough battle.”

Snowflake head coach Kay Solomon said the game was a good test for his team heading into regional play. 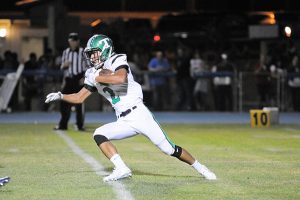 Even though the win is as good a candidate to have an asterisk next to it as any, Hinton didn’t consider the bad call the main difference in the contest.

“It shouldn’t have come down to that,” he said. “We didn’t play our best game, and I didn’t call a very good game.”

Lions quarterback Christian McCarthy decimated the Bulldogs’ secondary and finished a perfect 15-15 on the night for 378 yards and a touchdown.

After an inadvertent whistle cost the Bulldogs a fumble recovery, the Lions got their first score of the night late in the first quarter.

Safford got on the board with about 2:13 left in the first half when quarterback Manuel Apricio took it 35 yards to pay dirt. The Bulldogs had another surge as time was running out, but had to settle for a 25-yard field goal from Riley DeSpain and would trail at the half, 18-10.

Safford opened up the second half by moving the ball down into the red zone, but turned it over on downs after being unable to convert fourth and four from the 9-yard line.

Safford struck once more in the third quarter on a 73-yard touchdown pass from Aparicio to Cameron Abril, but it was the last time the Bulldogs scored, while the Lions peeled off touchdown after touchdown to finish the game 40-17.

TOMBSTONE – The Pima Roughriders’ foray into 2A continues to go well as they handed the Tombstone Yellow Jackets (2-1) their first loss and remained the only unbeaten team in the Gila Valley.

Pima (4-0) went undefeated on its way to a 1A championship last year and has not lost since the playoffs in 2014.

However, head coach Jace Hancock said a soggy, rain-soaked field limited his team’s practice schedule this week, and the Roughriders’ early first half miscues showed their lack of sharpness.

“We came out and snapped the ball over our quarterback’s head two times in a row and gave them a (safety) in the first two minutes,” Hancock said.

Pima settled down and began to methodically tear apart Tombstone’s defenses on its way to a big 42-8 lead by the fourth quarter. After substituting some players, Tombstone scored a couple garbage touchdowns to make the final score a more respectable 42-22.

“We got our heads screwed on straight and came out (after halftime) and played some football,” Hancock said. “We capitalized on each possession and made some four and outs and turnovers . . . They had some players. They are a very quick team. I definitely underestimated them.”

Pima added a game and will travel to Phoenix to take on the Bourgade Catholic Golden Eagles (2-1), which lost to Tonopah Valley (2-1), 19-0.