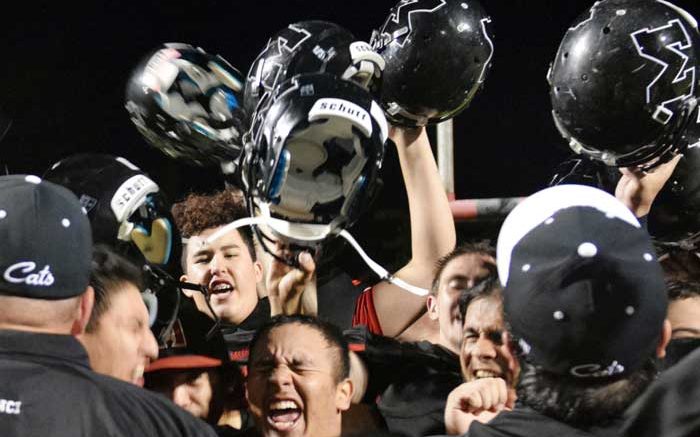 Photo By Raymundo Frasquillo: Wildcats celebrate in the end zone following a four-down defensive stand preventing Benson from scoring and preserving a 32-26 advantage for the win Sept. 1.

MORENCI – It matters not how one starts, but rather how one finishes.

Morenci received the opening kickoff and drove 78 of 85 yards in seven plays using 3:18 in Lawson Stadium on Sept. 1. Benson intercepted the ball on 3rd-and-5 on the seven and returned it for a 93-yard score and a 6-0 lead. The Wildcats went on to score during five of seven other possessions while the Bobcats did so on three of nine. 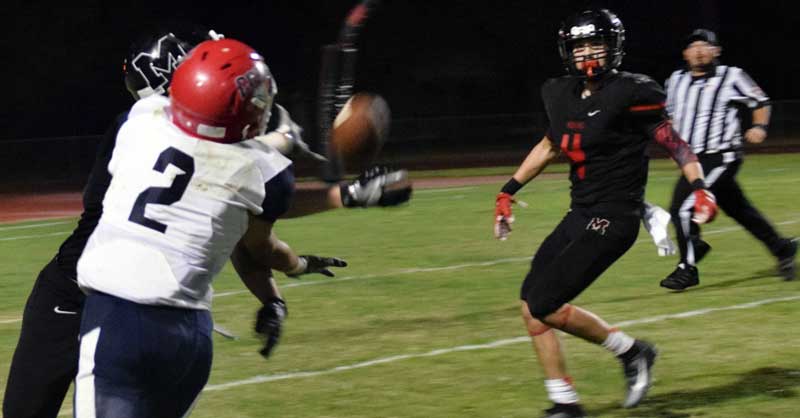 Photo By Raymundo Frasquillo: Senior Nicolas Carrasco (No. 4) comes over to help teammate Brayden McCarthy defends against a pass reception by Benson junior Jayse Burkett (No. 2) during the closing seconds. Carrasco blocked a third period punt and totaled four tackles.

A six-point advantage, 32-26, with 22.3 seconds left and their opponent 40 yards from the end zone appeared bleak for the Wildcats. All Benson had to do was score to tie and win with the conversion attempt. The outcome hinged on what the Wildcats would do on the defensive side of the line during Benson’s tenth possession.

The Wildcats defended the four successive pass attempts, the fourth with 2.5 seconds left, without drawing penalties. The result, Morenci left the field with a 2-0 overall record.

“I saw something I hadn’t seen before,” first-year head coach David Gallegos said. “I saw no quit in our eyes (during the closing moments).”

Trailing by six to begin their second possession in the opening period, the Wildcats used up 4:37 before a bad pitch was recovered by the visitors. The Bobcats used 2:48 before punting on fourth-and-15; Morenci scored, Benson punted on fourth-and-13, and Morenci scored again to take a 13-6 advantage into the locker room at halftime.

The Wildcats covered 57 yards in eight plays using 3:33. Junior Isaac Pacheco ran in from the one on 2nd-and-goal and junior Christopher Roybal added the conversion kick to give Morenci a 7-6 advantage with 9:15 left in the first half. The second score, a 12-play, 84-yard drive used 7:15. Senior Steven Chavarria ran in from a yard out on 4th-and-1 with 1.5 seconds left in the half.

Benson received the second half kick-off, needed 66 yards to alter the 13-6 deficit, but punted on 4th-and-20.

Photo By Raymundo Frasquillo: Benson sophomore quarterback Talon Palmer reaches back to recover one of two fumbles encountered by the Bobcats against Morenci Sept. 1.

Morenci started 57 yards out, Chavarria picked up eight yards and scored on second-and-2. The drive took 1:08 and the conversion pass attempt, after two penalties, fell incomplete. The Wildcats led 19-6.

The Bobcats took eight plays to score. Sophomore quarterback Talon Palmer connected with junior Jayse Burkett for an 18-yard pass play. The conversion run was stopped. A recovered Morenci fumble put the Bobcats back on offense, and a blocked punt on fourth-and-19 was recovered by Morenci. The Wildcats were on the 41 with 19.6 seconds left in the third period.

The Wildcats did not complete two pass attempts.

Morenci led 26-12 with 1:18 elapsed in the fourth period. Chavarria scored his third of four touchdowns, from two yards out, and Roybal added the conversion kick. The Wildcats started the period seven yards out and capped a 41-yard drive in five plays taking 1:37 off the clock.

A punt on fourth-and-19 preceded the Wildcats final score. Chavarria gave Morenci a 32-20 advantage with 3:20 left to play. An onside kick was recovered by the Wildcats and 57 yards were covered in two runs, two by sophomore Matthew Harrington and 55 by Chavarria using 37 seconds. The conversion kick was wide right.

After picking up a first down, the Bobcats punted on fourth-and-19 during their initial possession of the final period. Palmer connected with Burkett for a 25-yard touchdown on a second possession, capping an 85-yard drive in nine plays plus a penalty and using 3:06. A Palmer to R.J. Valentine completion narrowed the deficit to six, 26-20. The Bobcats drove 65 yards in 11 plays plus aided by a 15-yard penalty on a third possession, used 2:45 to cross the goal line. Palmer ran in from seven yards out with 31.2 seconds remaining. The conversion pass attempt fell incomplete, but the ensuing onsides kick was recovered by the Bobcats with 22.3 seconds left.

Provencio had a quarterback sack, Carrasco and Pacheco both half a sack, and Carrasco had a blocked a punt.

Additionally, the Bobcats had 180 return yards, punted thrice for a 41.0-yard average, lost neither of two fumbles and were assessed 65 yards on seven penalties.

Palmer completed 4-17 passes for 102 yards with no interceptions and Burkett went 0-1. Burkett caught three passes for 66 yards and Valentine 1-36.