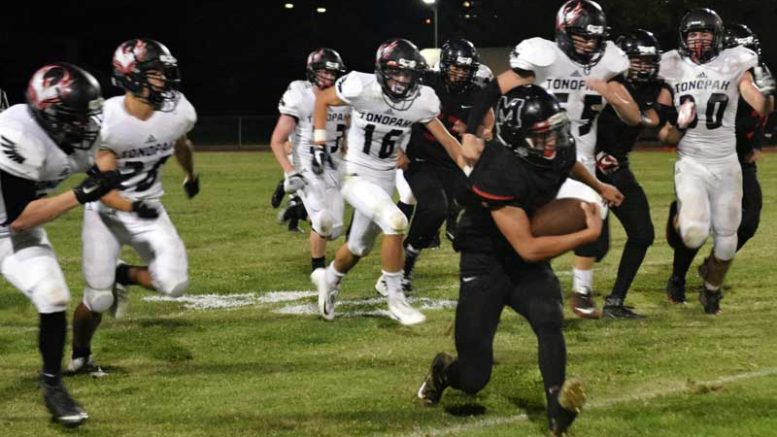 MORENCI – Seventeen-year old running back Steven Chavarria had a productive night during the 2017 season and home opener versus the Tonopah Valley Phoenix on Aug. 25. After game statistics were totaled, he wound up with over a third of the team’s rushing yardage gained and two-thirds of the touchdowns scored.

All he did was following through with what he told his brothers in football during the July fundamentals camp, “I’ll work hard and do my best every day.” He was one of the leaders during the morning run and sprints.

The 5-7, 135-pound senior helped break the scoreless deadlock in the second quarter, crossing the goal line on a 73-yard pass play from junior quarterback Mark Roybal.

Chavarria added the Wildcats second touchdown with 5:21 elapsed in the second half, sprinting 33 yards around the left side untouched into the end zone.

A third score, added by a teammate, gave the home team a 21-0 advantage with 3:15 left in the game. The shutout lasted a total of 45 minutes, 45 seconds as the visitors scored with 2:15 left. 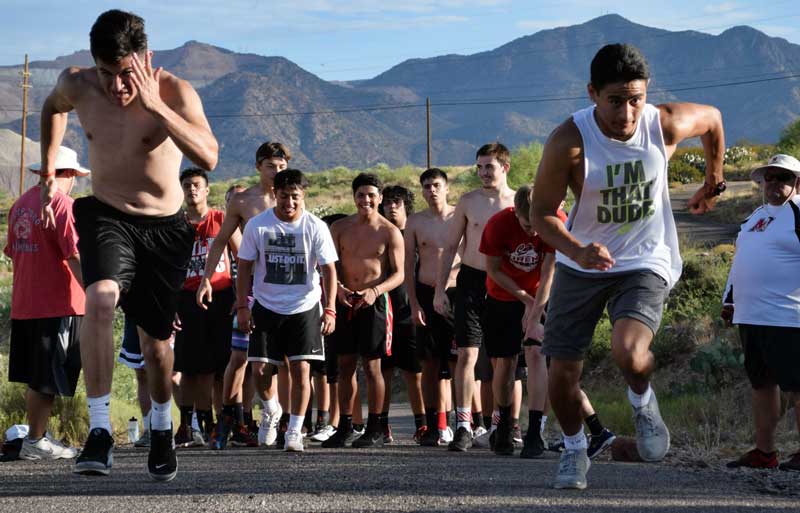 Photo By Raymundo Frasquillo: Steven Chavarria, right, was one of the leaders during morning sprints at Morenci’s July fundamentals camp.

Fourteen hours after the final buzzer sounded, Chavarria made the most important carry of his young life, taking the handoff from a different quarterback, and delivering it with poise and confidence, yet without having to elude defenders bent on stopping him.

Chavarria didn’t get six points for reaching pay dirt this time, and his attire was not the red and black Wildcats’ uniform, but tan-colored pants and a pastel shirt with a tie matching the package. He got the satisfaction one gets for doing your best, and all you can for your family.

The non-pigskin package contained the remains of his maternal great-grandmother, Rosa Roybal Munoz. She had cared for him since he was in his mother’s womb and throughout his life.

“They were close,” his mother, Sheila, said. “She watched him play until her health declined last year. When we had the (memorial service) meeting, we knew a casket needed pall bearers, but not who carried a person being cremated.”

Upon her passing, Chavarria accepted the responsibility of notifying family members and volunteered to carry her to the final resting place, the Sacred Heart Catholic Cemetery.

He is a small town boy, the son of a blue collar worker, and well on his way to manhood.

His Friday night highlights will be played and replayed by opposing coaches throughout the season in preparation for the Wildcats, and he may wind up as a decoy from this game forward. Regardless, Chavarria will do what he said he would, ‘work hard and do his best every day,’ for his family.