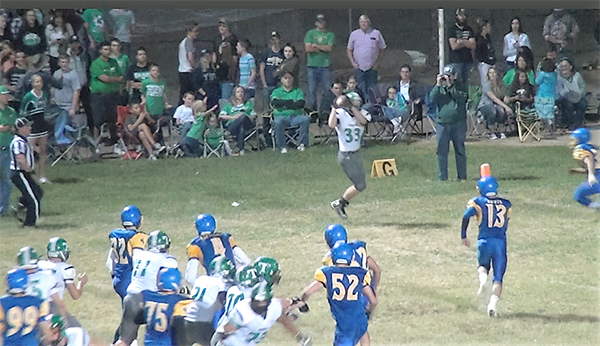 PIMA – Turnovers and the inability to stop the running game cost the Pima Roughriders (5-1) its 19-game winning streak as the Thatcher Eagles (5-1) came into Edd Hubbard Field and put a sound beating on the home team, 54-14.

“They came out tougher than we thought they would be,” Pima head coach Jace Hancock said. “There’s no excuse, we just (have) to do better.”

Thatcher scored on its first four possessions, mixing it up with two rushing touchdowns, a passing touchdown and a pick six interception.

Thatcher quarterback Jake Dunlap was involved in the first two scores, beginning with a 1-yard scamper into the end zone. He followed that up with a 12-yard pass to Dallin Cook. Dunlap finished the evening with two rushing and three passing touchdowns.

Thatcher’s work horse on the night, Nate Lee, then got in on the scoring action with a 19-yard run, his first of two on the night.

The defense then got on the bandwagon as Jordan Herbert stepped in front of Pima quarterback Ryne Lewis’ pass and took it back 25 yards to pay dirt. And before the sellout crowd was all in their seats, Thatcher was up 28-0 at the end of the first quarter.

“The team came out hard,” Thatcher head coach Sean Hinton said. “We established the run game early, and that’s what we wanted to do.”

Pima showed life in the second quarter, however, as Lewis hit receiver Trey Thompson twice to move the ball down into the red zone, aided by a pass interference call on an interception that was called back.

Lewis then finished the drive with a 5-yard fade to Jarrett Kartchner in the corner. A 2-point conversion completion to Kartchner’s twin brother, Justin Kartchner, was good and Pima was on the board, 28-8. 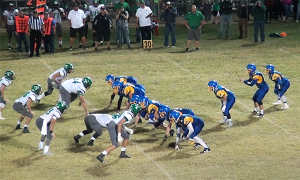 Thatcher came right back, however, after a failed fourth down conversion set up the Eagles at the Roughriders’ own 25 yard line. After a couple of runs by Lee, Dunlap hit a wide open Tyrel Pritchard for a 16-yard touchdown and Thatcher went into halftime up 34-8.

Pima showed signs of life at the beginning of the second half, once again using its air attack to move the ball down the field.

After big passing plays to Justin Kartchner and Thompson brought the ball into the red zone, running back Emilio Molinar punched it in up the gut for the score. However, it would be Pima’s last points on the night.

A tumultuous end of the third quarter sealed the Roughriders’ fate as they gave the ball up on three straight turnovers, including an interception by Dunlap, a high snap that sailed over Lewis’ head and was recovered by Thatcher and a lost fumble by Molinar.

Hinton told Gila Valley Central that he was pleased with where his team now sits in its position.

“We still got us some tough teams ahead, but I think we got a good chance,” he said.