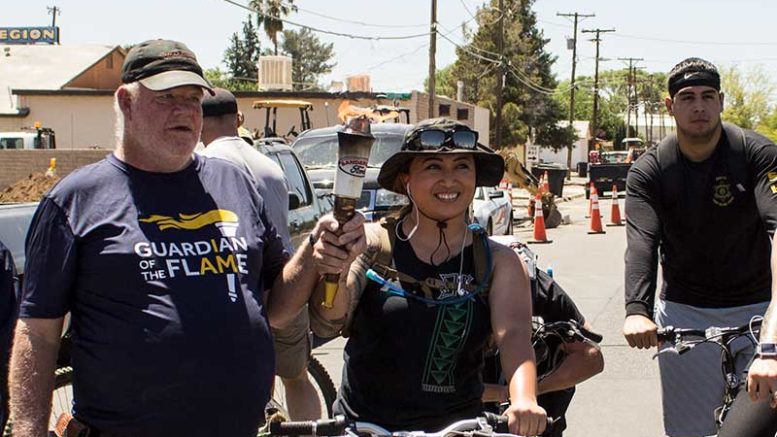 SAFFORD – Starting out at 7:30 a.m. on Monday morning, guardians of the flame began the journey from the Arizona State Prison Complex-Safford in the San Jose area to Glendale, Arizona.
A fundraiser to benefit the Special Olympics, the journey is roughly 182 miles from start to finish. Local law enforcement and correctional officers teamed up to carry the torch as they walked, jogged and drove.Three hours after starting the journey, the local torch runners stopped at Firth Park to have lunch with some of their biggest fans from the Graham County Rehabilitation Center (GCRC). Before lunch, however, the GCRC personnel combined with the torch runners to walk the lit torch around the block in a pride parade. 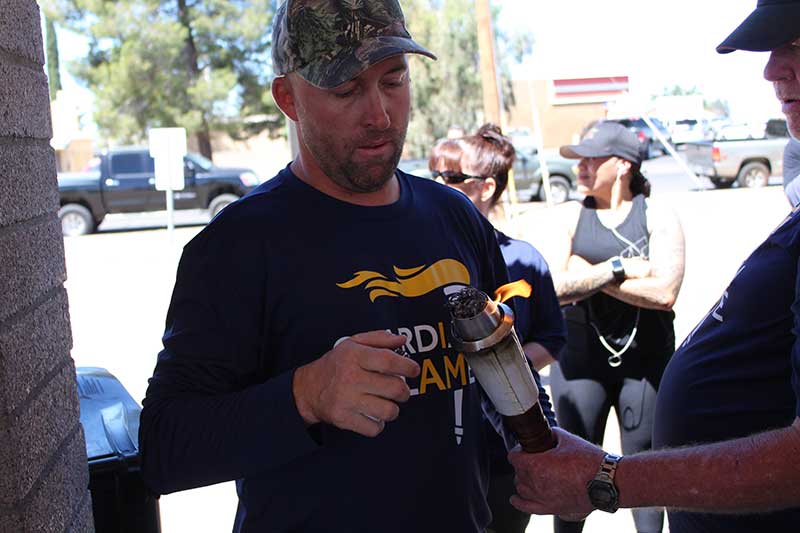 One of the organizers of the torch run was David Adams, who initially became involved because he was asked but now is so moved by the athletes’ stories that he can’t imagine not taking part.

“I got into this was because I was asked initially and then I stuck around because I started to see the athletes’ own stories in front of my eyes and they’re amazing,” Adams said. “They happen in front of you as you’re sitting there watching the event, and what I would like to see even more of in the future is the community embracing this program and being even more and more supportive even though this years. I will say I was really blown away by the different law enforcement agencies and sponsorship and assistance from even the Lion’s Club to the Bike Club to Arizona Department of Corrections who were all out there pitching in to make what turned out to be one of the best Special Olympics take place in Safford that I’ve seen.”

Betsy Hawkins of the GCRC told Gila Valley Central that the GCRC staff look forward to the Special Olympics all year long, and that the lunch shared with the torch runners was particularly thrilling.

“We loved it,” Hawkins said. “They look forward to this every year. The biggest highlight of the year for them is to go to state and the torch run here. I just can’t tell you how much we look forward to it.”

Participates Sgt. Esperas and Michelle Te’o  with the Graham County Sheriff’s Office told Gila Valley Central that they hadn’t trained for the event but was hoping to make it all the way to Reds convenience store, which is just east of Bylas.

Te’o said that she had never participated in the event but looked forward to the challenge of riding her bike over such an extensive amount of miles.

“I like the cause – the reason we’re doing it,” Te’o said. “But the most exciting (part) is probably (to) be able to push ourselves all the way through.”

Esperas  said jokingly that there was a possibility their bodies wouldn’t hold up for the entire trip.

“If you see us on the side of the road please provide CPR,” Esperas said.

After lunch, the entire group left Firth Park with a police car accompanying the riders in front and behind. The first stop was Thatcher Park and then on to the Glenbar Gin and then Reds. At Reds, the torch was handed off to drivers, who would drive it to Glendale.

Kansas Police Chief Richard LaMunyon created the Torch Run. It was his way to involve the local law enforcement with the community in support of the Special Olympics. Now the Torch Run encircles a larger world of fundraising, such as T-shirt sales and Tip-a-Cop events.