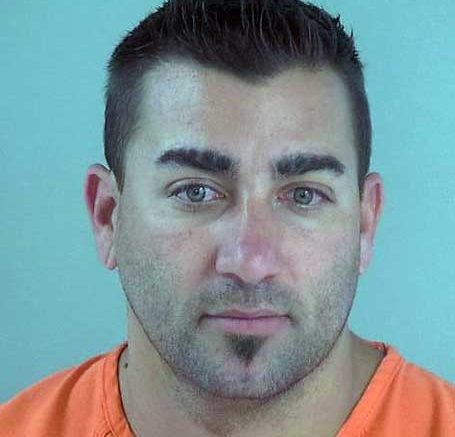 Contributed Photo/Courtesy GCSO: Larry Walters. was booked into the Graham County Jail after allegedly assaulting and kidnapping his wife.

THATCHER – A simple exchange in babysitting a child turned horrific when a woman was allegedly beaten and kidnapped by her husband, only to be rescued at a San Carlos hospital.

The victim was found Sunday when the San Carlos Tribal Police contacted the Thatcher Police Department to inform them about a domestic assault that occurred on Stadium Avenue in Thatcher. Thatcher officers traveled to the San Carlos Apache Tribe Health Center, where the victim told authorities of her abduction and abuse.

According to a Thatcher Police report, the victim was interviewed by officers while wearing a cervical collar on her neck. She told officers that her husband, Larry Eugene Walters Jr., 35, of Pima, had asked her to babysit their daughter. The victim agreed, but when Walters returned he became abusive and took her into another room where he choked her and bashed her head into the wall and floor. The victim lost consciousness during the assault and woke up at Walters’ house located to the west of Pima having been stripped of all her clothing. According to the police report, the victim said that she was detained at Walters’ residence anywhere from one to two days. When she asked for her clothes, Walters wouldn’t give them to her or let her use her cell phone. The victim told officers that she was in fear for her life and that Walters kept her locked up like a prisoner.

When asked by authorities how she had convinced her kidnapper to bring her to the hospital, the victim said Walters was worried because she had been throwing up for two days. However, when she arrived at the hospital she waited until Walters wasn’t in the room and told the nurse that he had caused her injuries and wanted to kill her. The San Carlos Police found the victim had an order of protection against Walters, and they arrested him for violating the order by being with her. According to the report, the victim didn’t know why Walters had chosen to bring her to the San Carlos hospital.

After the officers asked her to explain where she was injured, the victim said that she was hurt on her head, neck, the ribs on her right side and that Walters had cut her hair. The responding officer wrote in his report that he could see red marks on the right side of her throat as if she had been choked. The officer also noticed bruising and swelling on the victim’s chin.

When Thatcher officers interviewed Walters, he told the officers that he had come to the victim’s mother’s house to do laundry and that he had brought Bud Light margaritas for the victim after she had asked him to buy alcohol for her. According to Walters, while he was at the residence with the victim, she suggested that they engage in sexual relations. Walters said he went to put a movie on for the child, who was at the residence at that time. After he returned, he found the victim had fallen in her room and that she said she was sick. After he carried her to the bathroom, he said she fell down in the tub as well.

Walters said that the victim’s mother asked him to take her to the hospital, but he didn’t because everyone had fallen asleep at the time. However, he decided to take the victim to his residence the next day because she was incredibly intoxicated and he wanted to keep an eye on her. According to Walters, the only time he grabbed the victim’s hair was when she attempted to jump out of the car after waking from a drunken sleep while the vehicle was moving. Walters also said the victim vomited on her clothes, and that was why he removed them, and that he cut her hair because it was matted. Also, Walters told authorities he had accidentally hit the victim a month ago, giving her a black eye.

When officers asked why Walters had taken the victim to the San Carlos hospital, he said he believed the local hospital would not give pain medication to the victim. Walters also said that he told the nurses at the hospital that the victim had been drunk and that she had fallen multiple times, thus obtaining her injuries. Later, Walters changed his account of the victim awakening in the car, saying that he grabbed her by the back of the neck when she attempted to jump from the moving vehicle.

Later, officers returned to the victim and inquired whether or not she had consumed any alcoholic beverages on Friday or Saturday. The victim said that she had not.

On Sunday, Walters was arrested and booked into the Graham County Jail. He is charged with aggravated assault/domestic violence, kidnapping and assault.