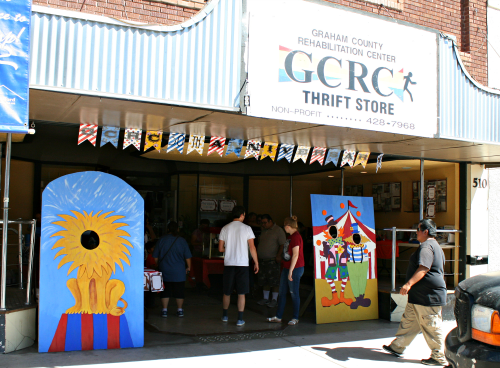 SAFFORD – It’s not every day something turns 30, and the staff at the Graham County Rehabilitation Center (GCRC) threw a great anniversary party.

The party, which was to celebrate the GCRC Thrift Store’s 30th anniversary, rocked the center from 10 a.m. to 2 p.m. and included free face painting, photo booths, cotton candy, popcorn, snow cones and multiple other treats. Everything in the stores was sold at a reduced cost in honor of the event. There was also karaoke, free raffles, and drawings every 10 minutes.

Program Director Lane Hegel helped run the event with the rest of the employees. He gave Gila Valley Central a brief history of the organization.

“Formally we were called the Graham County ARC,” he said, “(The) Association for Retarded Citizens. We wanted to get away from that, so they changed the name in about 2005, but the GCRC started in 1968. Families wanted an alternative for their kids. It used to be most people with an instability would have ended up in an institution setting. There were just three institutions in the state of Arizona, and all except one have been closed now. But it was an alternative for that.”

When asked what was new and upcoming for the GCRC, Hegel said a new training program was in the works.

“We’re starting a new transition to employment training program,” he said. “It will be a program which focuses specifically on the skills you need to work out in the community. (It will) help people transition out to employment. It’s a new program.”

The staff at the GCRC are currently working on readying their curriculum at this time to begin the program.

Another recent addition to the GCRC is the “Last Chance” store. Located beside the other GCRC thrift stores, the last chance store is where the inventory goes that has been sitting on the shelf for too long. Once the inventory hits the last chance store, the clothing can be put into bags and sold for $8 a bag, and the other items are sold by weight.

However, the secret has been kept quiet because the public is used to being excluded from that part of the building. Nevertheless, the bright tubs full of books, shoes, and clothes, are all ready and ripe for the public’s picking. 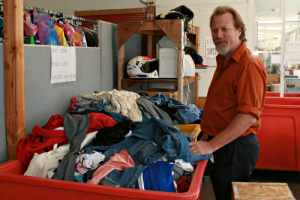 Not all the newest developments have been good for GCRC. Since the completion of their newest warehouse, thieves have been repeatedly breaking in and have managed to steal a shop vac, two welders and a donated flat screen television.

“For nine months now, people have been coming in and stealing stuff,” Hegel said.

At this point, the GCRC is working on bids to seal up the warehouse and hopefully prevent theft. Hegel also told Gila Valley Central that thieves go through donations left on the street, taking anything of value and leaving the rest in a mess. However, the individuals at the GCRC are striving to find a quick solution to the problem. With its 30-year anniversary party being a blast of family fun on Main Street, the GCRC organization continues to grow in new ways every year.